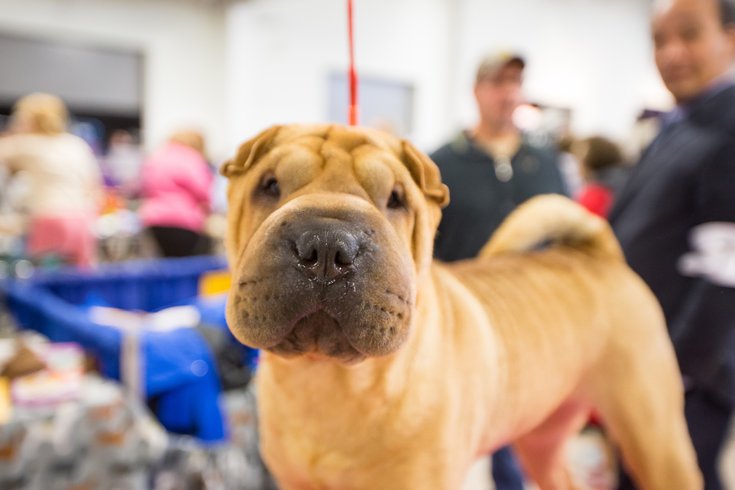 The National Dog Show will bring some 15,000 people to the Expo Center over the two days.

The Kennel Club of Philadelphia’s National Dog Show will feature 2,135 entries at the annual canine extravaganza next weekend, the largest number in more than ten years. It is the seventh consecutive year that the number of entries has increased, reflecting a growth trend also evidenced in sponsorship, vendor booth sales, attendance and marketing partnerships.

The National Dog Show is set for all day Saturday and Sunday, Nov. 18-19 at the Greater Philadelphia Expo Center in Oaks. Tickets are $16 for adults, $7 for children ages 4-12 and free for those 3 and under. They can be obtained in advance at www.NationalDogShow.com and are also available at the door.

“We’ve experienced remarkably consistent growth since moving to the Expo Center in Oaks (2009),” said Kennel Club of Philadelphia (KCP) President Wayne Ferguson. “There’s a lot of competition for the entertainment dollar, but people love their dogs and we have a unique attraction that works for everyone.”

One of the aspects that sets Philadelphia apart from the 3,000-plus dog shows in America is its status as a “Benched” show, meaning that all dogs must be available to meet and greet the public at designated locations throughout both days. There are only two other “Benched” shows in existence – Westminster in New York City and the Golden Gate Dog Show in San Francisco.

The National Dog Show will bring some 15,000 people to the Expo Center over the two days and the number of sponsors and vendors offering the entire spectrum of new and different dog and pet products and services.

One popular location is sure to be the first-ever "Meet and Greet” area for kids to interact with the Kennel Club of Philadelphia Therapy Dog Ambassador Team of certified canines who visit regularly with patients and residents at the Philadelphia Ronald McDonald House, Children’s Hospital of Philadelphia and other healthcare institutions.

The 2,135 entries will encompass a record 191 out of the 202 American Kennel Club (AKC)-sanctioned breeds and varieties, which is a record in the history of the Philadelphia show, which began in 1879. In addition, there will be five Nederlandse Kooikerhondjes, a breed that will be eligible for full AKC competition in 2018.

Over 75 sponsors/vendors/merchants will populate the perimeter of the Expo Center, offering trade show-type prices on all things dogs and pets, including fashionable accessories, the latest product lines and large selections of bedding, treats and treadmills.

The Philadelphia media community has played a major role in helping the non-profit Kennel Club of Philadelphia promote the show, enlightening their audiences about National Dog Show Month in Philadelphia, which includes a charity fundraising walk, an art exhibit, a theatrical production and a gala. 95.7 BenFM, MetroKids, NBC 10, PhillyVoice.com and WEEU AM/FM all play a role in helping the KCP achieve its mission of educating the public about responsible pet ownership and the wonderful world of of dogs.

The author is a member of the Kennel Club of Philadelphia and the expert analyst for NBC’s “National Dog Show Presented by Purina” Thanksgiving Day on NBC. He is America’s foremost expert on all things canine as a longtime owner, handler, judge and for 27 years the face and voice of the Westminster Kennel Club Dog Show in New York City.