A vehicle, thought to be stolen, was swallowed by the hole 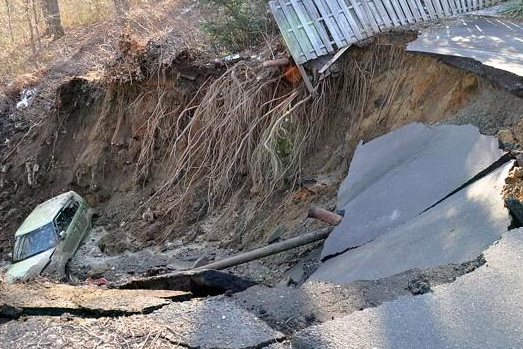 Careful where you park.

A 20-foot deep sinkhole forced the evacuation on Tuesday of four New Jersey homes after crumbling part of a roadway and swallowing up a car, police said.

An underground water main break likely caused the hole to form suddenly in a residential area of South Amboy, New Jersey, a city about 20 miles south of Newark, the South Amboy Police Department said in a statement.

There were no reported injuries and no homes were damaged by the crater. Crews were working to secure the area and stop the sinkhole, which encompassed part of a paved street as well as a wooded area, from expanding.

The sinkhole was discovered early on Tuesday, when a man living in the area noticed that his son's car was no longer in its parking space and reported it stolen, the New Jersey Star-Ledger reported on its website.

In fact, the vehicle had vanished into the sinkhole, the newspaper said.