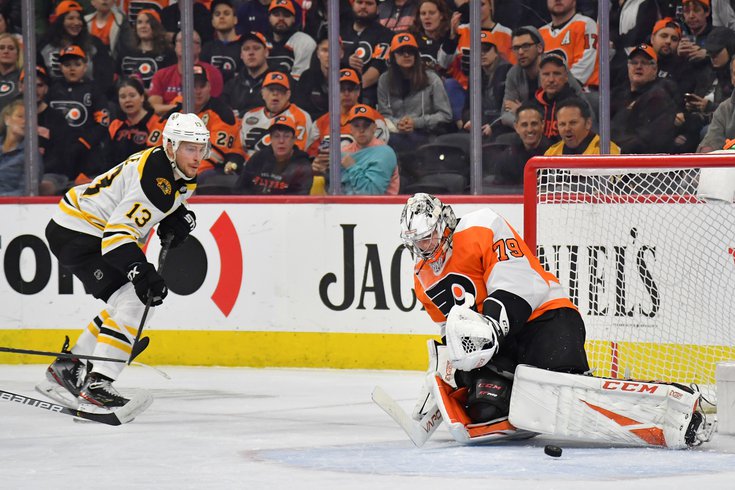 The Flyers have been among the best teams in hockey over the last month.

All good things must come to an end.

But the Flyers have no reason to pout or lick their wounds as they played a very solid game against the Bruins, despite losing 2-0. The home loss was certainly a rarity for the Flyers this season (just their sixth regulation loss at the Wells Fargo Center) but there are a bevy of positives to takeaway from Tuesday night.

The Flyers out-shot, out-hit, out-faceoffed(?) and definitely out-skated the east-leading Bruins, but the hockey gods just weren't willing to reward Philadelphia as their nine-game win streak ended before it could reach double digits.

Here are three takeaways from the Flyers' first loss since February 15:

Tuukka Rask was ready for the Flyers. No matter how sloppy the Bruins were with the puck, or how much slower they looked defensively, the Boston goaltender was a brick wall against Philly.

It was almost as if wave after wave of attack from the Flyers — they were out-shooting Boston 23-11 at one point in the second — only made Rask stronger as he fought off some brilliant chances.

He kept the Flyers at bay long enough for the Bruins to finally break through, as a Philly short-handed chance gone unrealized gave way to the first goal of the game, a power play strike from the point by Matt Grzelcyk. Later in the third, Boston added insurance off the stick of Patrice Bergeron.

In all, Rask stopped 36 shots from Flyers shooters.

Carter Hart got similarly barraged later in the game, and was brilliant, keeping the Flyers within one for most of the game despite some sticky situations. He saved 27 shots in the impressive losing effort.

Coming into action Tuesday night, the Flyers ranked fourth of all 31 NHL teams in total power play opportunities, with just around 3.3 of them per game. And though they only score on 21% of those chances (13th in the league) they still owe a large part of their success to the number of tries they get with their opposition disadvantaged.

Power plays in the stat sheet are one thing — a clear one-man advantage typically gives a team more scoring chances naturally. But the Flyers, at least of late, have been able to generate an enormous amount of momentum from them. And while they may not score each time, the Flyers are not only able to create chances with a player in the box, but keep that firepower pushing through for the stretch immediately after the power play too.

The number of times in Tuesday's game that saw a loose puck on a pass or rebound shimmy across the crease with no Flyer to tap it in was enough to drive the crowd (braving the coronavirus crisis to attend) mad.

A fury of five shots and even more high quality chances to score streamed in during (and after) Shayne Gostisbehere drew a tripping penalty in the first period. Another power play chance came later in the first and a third in the second, all coming up with a bevy of shots but nothing else. The momentum slowly slipped away after that.

In the large scheme of things, it doesn't really matter how many times you shoot the puck, or how many times you make a perfect pass, if you can't find the back of the net it's all for naught. The power play was due for an off night. They'll rebound.

If you look at the teams the Flyers faced off against during their win streak, they haven't exactly had what you would call a cake walk. But the toughest test they'll have the rest of the way began against Boston.

During their now departed win streak, the Flyers averaged 4.3 goals per game. The Bruins have allowed the fewest goals this season. So if they're going to get blanked, at least it was against the NHL's best.

Tuesday's setback begins a brutal stretch, during which time the Flyers will get a true postseason tune up. The Bruins, of course, have the best record in the east. Four of their next five games are against teams in the top two of their respective conferences, with all five games coming over an eight game stretch. Thankfully, four of the five are also at home:

Six of their eight games following the above stretch are against non-playoff teams.

Of their nine wins leading up to the Bruins tilt, six have been against teams in the Metro division.