5 awards from Phillies' big sweep of the Brewers 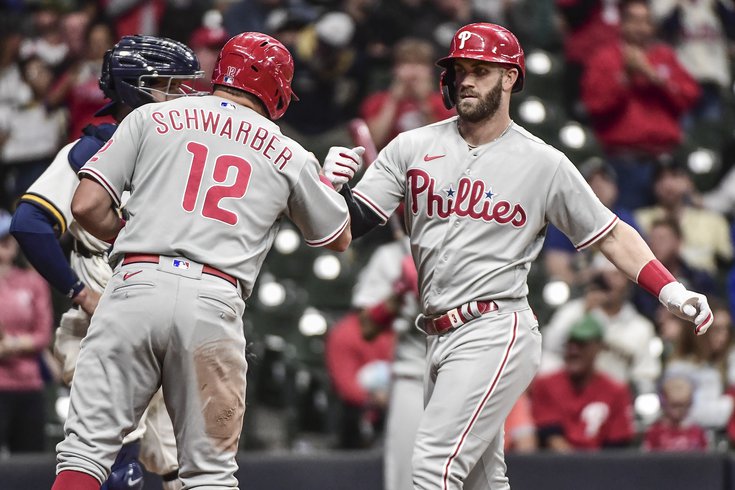 No more shift should be good news for Bryce Harper and Kyle Schwarber.

The Phillies have won seven in a row, and are a game below .500 just over a week after firing manager Joe Girardi. Impressive sweeps of the Angels and Brewers now have Philadelphia back on the map and looking like a contender.

Before turning the page, let's take a look back at a memorable series in Milwaukee and hand out some hardware.

• Alec Bohm and Matt Vierling improbably hit ninth inning homers off of Brewers closer Josh Hader, who hadn't allowed a run in nearly a year. A 3-2 victory was their reward.

• The bullpen combined for five scoreless innings as Bryce Harper and Kyle Schwarber went yard, and Didi Gregorius added a double and triple in a breezy 8-3 'W.'

It's hard not to be a little bit obsessed with the fact that the Phillies fired their World Series-winning manager and haven't lost since. There has to be some kind of correlation, right? Are they just more motivated to play for Thomson? Was Girardi really holding them back for some reason?

It's been said by some players that Girardi was hesitant to trust the team's youngsters. In the games since the managerial change, Bryson Stott (more on that a second) looks energized and revived and several of the other 20-somethings (like Bohm and Vierling and Mickey Moniak) are looking a lot more comfortable out there. Maybe there was something to it.

Either way, credit is due to the Phillies front office for manning up and making this monumental change.

Bryson Stott isn't going to win Rookie of the Year or anything, but he seems to have found a role with the Phillies as a streaky hitter (on a team full of them) who is reliable in the field and the team will certainly take that. After his epic walk-off homer against the Angels, Stott went 0-4 in Game 1 against the Brewers. He then mashed four hits in four at bats in the middle game and added a walk and an RBI in Game 3.

The Phillies infield has been kind of a mess so far with injuries and slumps abound. If Stott can seize and keep the second base spot with Jean Segura hurt it will make for some tough decisions in a few weeks for new manager Thomson. And that's just fine.

Just give him the MVP already award: Bryce Harper 💪

I saw this tweet just prior to writing this article:

Harper, who continues to be stuck at DH with his elbow injury lingering, had an RBI in each of the three games and is basically a sleeping giant who is inevitably going to do something each and every night to help the Phillies win.

Start me up award: Phillies rotation 🎸

The Phillies starting rotation has somewhat quietly been a huge catalyst for their recent surge. Here's a look at their performance against the Brewers:

A 1.42 ERA for the series, even with a subpar outing for Eflin (he threw a lot of pitches, 96, in his four innings) is spectacular. And this is without Zack Wheeler who wasn't schedule to pitch in the series and is on paternity leave.

All around domination award: It's the entire team 🏆

The Phillies have won their last six games against the Angels and Brewers — teams with winning records (at least at the start of east respective series) — by a combined score of 47-14. Here's a look at their numbers compared to the rest of Major League Baseball in the month of June:

You get the picture. They're red hot in every facet.

The Phillies finally get some relief via the schedule gods, as they host the lowly Diamondbacks for a trio of games this weekend. Kyle Gibson, Zack Wheeler and Ranger Suarez are slated to start in the nightcap, 4 p.m. and 1 p.m. starts, respectively.