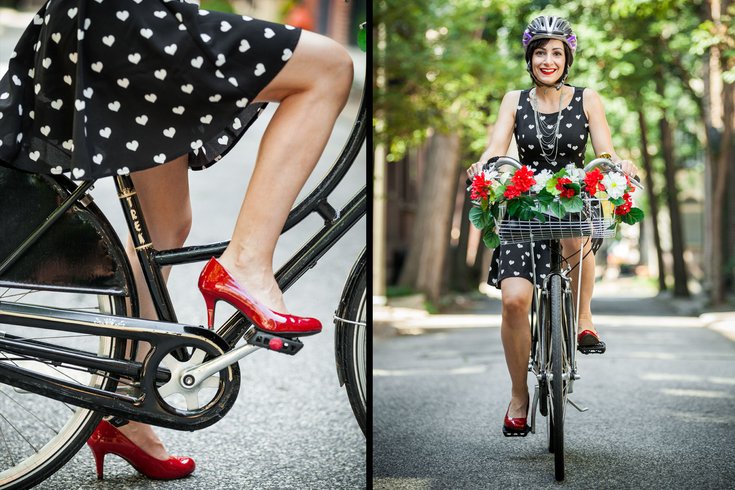 Marla McDermott rides her Dutch-style bike, made with a slide-through bar so that she can comfortably wear a skirt while biking.

Now more than ever, with bike shares and infrastructure changes popularizing city biking, the notion of what a bike should look like and serve as has started to shift. A bike today can't be simplified as two pedals and wheels anymore than a car can be reduced to an engine and a steering wheel. The modern bike is an emblem for fashion, a vehicle for art, a sports tool and so much more.

Below, find just a few Philadelphia bike-lovers who've crafted some eye-catching sets of wheels that capture the magic of a bike scene that's bursting with life. 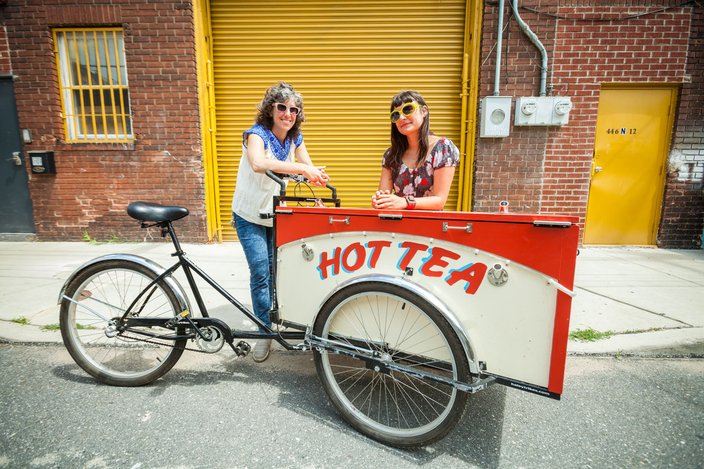 The Hot Tea Cart, built as part of a summer grant from the Asian Arts Initiative, is as much an embrace of bike culture as it is tea culture.

"This would be considered a work of art in the realm of 'social practice' -- that is, the art is less through object-making, and instead, the work is the process of engagement with people through conversation and sparking relationships," Sclavi told PhillyVoice. "The Tea Cart is a tool to bring people together."

The trike is specially constructed to be larger than what Haley's Tricycles typically has made, meant to be large and strong enough to hold the 45-inches-long tea cart. The tricycle-and-cart combo also has an umbrella holder, an internal hub, three gears, a front latch and a fold-out table. To boot, it stores five stools, two benches and various tea-making supplies.

The trike and its cart are meant to turn heads and prompt a following -- "like cat herding," she quipped. Sclavi rides around Chinatown on her trike offering free tea, and then stops the cart for a crowd of partakers in an attempt to generate conversation; to prevent interested people from wandering off, she said, she doesn't use disposable cups. The project and its findings will culminate in a short video, to be released this fall and screened in a yet-to-be-determined open-air theater.

The bike itself is designed to take nods from Chinatown. Its frame is painted with colors found in the neighborhood, and it features LED light strips reminiscent of those that stock Chinatown light stores.

For this year's particular tea cart project, paired with the Pearl Street Micro Grant Project, she can be found roaming North Chinatown and inviting passersby to talk about what it means to belong in a community.

Marla McDermott and her heels-on-wheels bike 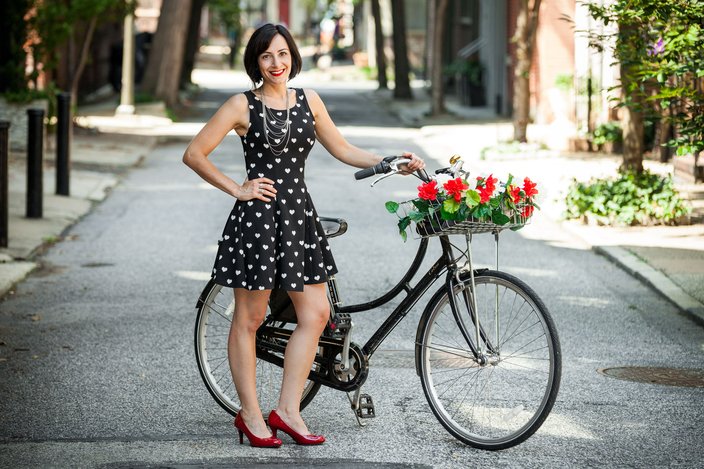 Marla McDermott, of iHeartPHL, with her Dutch-style bike -- made so that she can wear a skirt while riding. She decorates the basket according to what she saw during a trip to Amsterdam. Thom Carroll / PhillyVoice

When Marla McDermott first went to Amsterdam and spotted a fleet of dolled-up women on their bikes, her eyes were aglow with fascination.

"I never realized that women could be feminine and ride bicycles," she told PhillyVoice. "It took going to see that bikes could be an expression of your style, so I thought, 'I'd love to turn the concept of Philadelphia as the Amsterdam of North America into a reality.'"

In which case, what better way to lead than by example?

McDermott proceeded to fix up a bike she was loaned by a friend, customizing it to have a Dutch-style step-through -- or a sloped front bar -- to be ideal for skirt-wearing. (She also wears skirt weights while biking, in case you're wondering.)

"I want women to be open to the concept that you can still ride your bike in a skirt and heels and not look silly," she said -- emphasizing that she'll even bike around the city with her clients. "I'm commonly asked by men if I fear my heel will get caught in the peddle. There's a misconception by men that it's difficult to bike in heels, but it's actually not at all."

Chris Nalls and his Warhawk bike 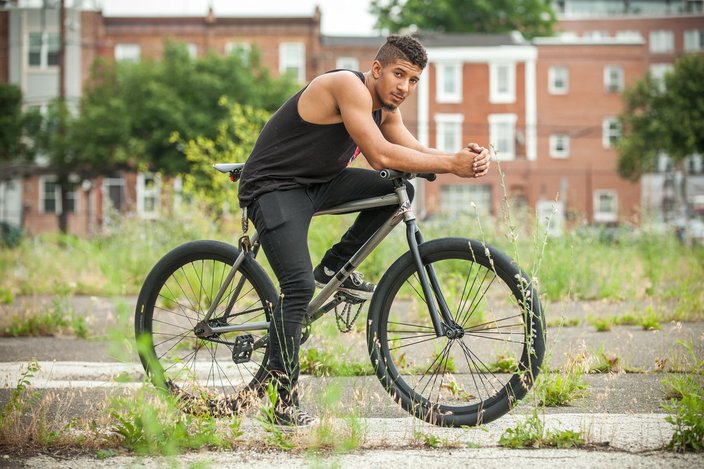 Nalls riding his bike in South Philadelphia. The bike is the product of two years of customizing, with the bike ground down and polished to give off the silver-fighter-plane look. Thom Carroll / PhillyVoice

Chris Nalls speaks of his bike with the enthusiasm of Einstein doing a math equation.

Nalls, who aspires for the X Games, first discovered his bike in a friend's basement. A fixer-upper, he spent two years dedicated to perfecting it into what it is now: a stealth-plane-themed bike with volume cutter forks, a carbon seat with a red light tucked underneath, a 24-spoke rim laced to a 36-spoke hub, a 39-tooth tree sprocket with a 14-tooth cog, profile cranks and 26-inch thickslick tires -- "to add aggression," he said.

"People ask all the time about my bike," Nalls told PhillyVoice. "They'll either wonder why there’s a shark mouth or they'll ask about the seat or chain strap." 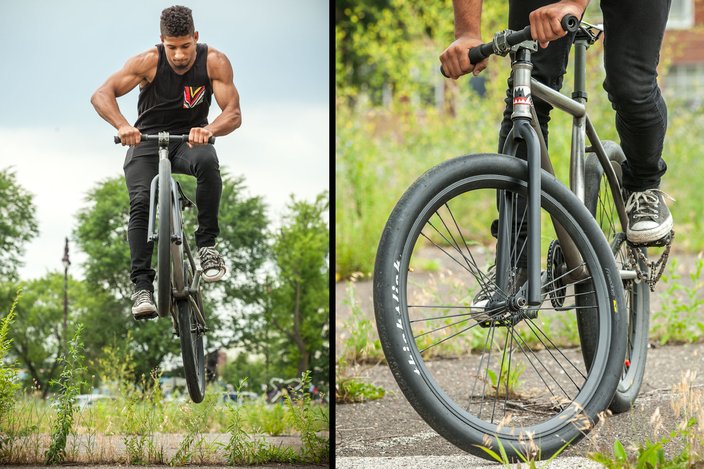 But for the 19-year-old Nells, biking is second nature. Having a tricked-out bike is just part of his lifestyle.

Marni Duffy and her family bike 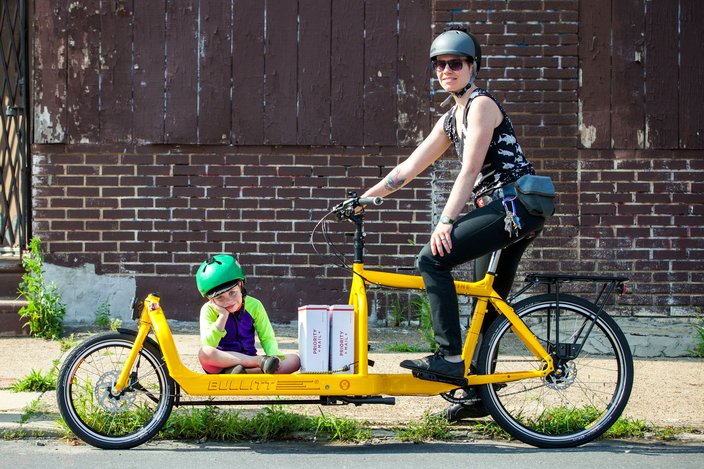 Marni Duffy atop her cargo bike, alongside her son. A Larry vs. Harry bike: Duffy and her husband built the front and rear wheels themselves. Thom Carroll / PhillyVoice

The bike was constructed with pieces and parts gathered and assembled by Duffy and her husband at Firth and Wilson Transport Cycles on Frankford Avenue. It has an internally geared hub for shifting, as well as a dynamo hub on the front that powers lights while she pedals. The rear rack, meanwhile, can carry about 75 pounds of kids or cargo. 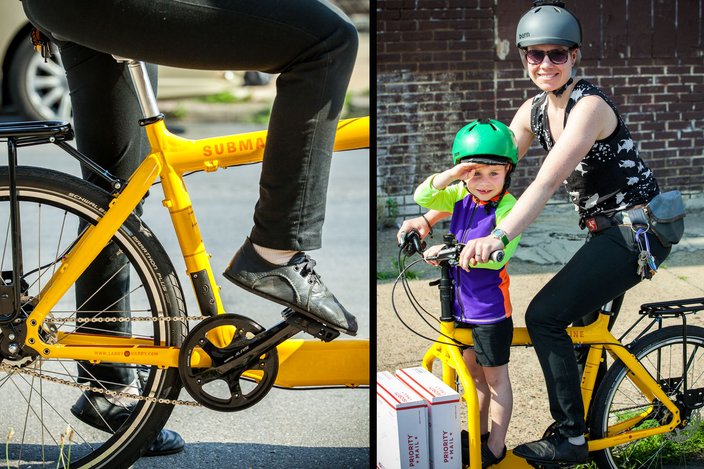 Marni Duffy hauls both cargo and kids on her bike. Thom Carroll / PhillyVoice

Duffy, who also organizes the Kidical Mass PHL family bike ride, describes her bike as a "beautiful tool" for getting around, but also as a way to enliven her day.

"I'm more engaged with my community when I'm on my bike: I can interact with my neighbors and friends, and I can see, smell, hear and feel my surroundings much more intimately than I do when driving a car," Duffy told PhillyVoice. "I have never had a special relationship with a car. Almost all of my memories have been largely negative. ... Being in the car with my kids is pretty horrible: they'll bicker, get car sick, and ask 'Are we there yet?' We generally have a better time on the bike."

Angie Hilem, the Jersey driver-to-biker convert, and her 'Bumblebee' 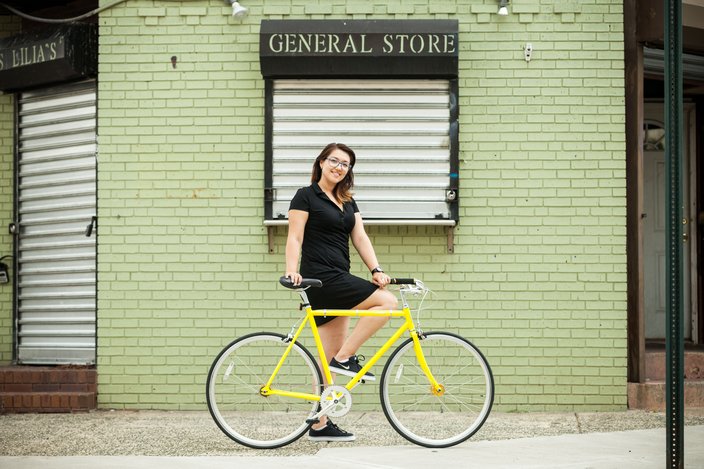 "She's like my friend. Her name is Bumblebee, because of the bright yellow color and black handle grips, but I call her 'Bee Bee,'" Philly entrepreneur Angie Hilem, who started biking in the city just this spring, told PhillyVoice.  "I got to customize it [at Bicycle Revolutions on Fabric Row] so that it's built for me; it's like an extension of myself."

Long a gal from New Jersey who's felt plenty cozy with her car, Hilem said having her bike as a go-to in the city has made her feel "liberated." It's also evolved to become a sort of marquee for her entrepreneurial brand.

"I love this bike because it stands out so much," she said. "It’s actually influencing my own personal branding – moving forward, I’m going to put bright yellow in my [marketing] logo." 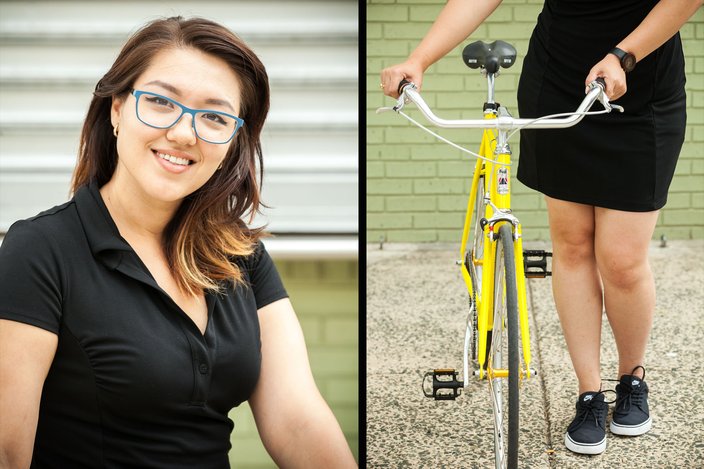 Hilem's bike is custom-made to be short, slim and accentuated in a way to give off a bee aesthetic. Thom Carroll / PhillyVoice

Hilem took the leap of faith with cycling this summer in an effort to reduce her carbon footprint and become more physically active. In the process, she said she's been pleasantly surprised to realize just how biker-friendly Philadelphia is -- despite driver-biker tensions ("That's gotta be a Philly thing," she said).

"My husband and I have been to LA, Chicago, San Diego, Paris -- we haven't seen a place as bike-able as Philadelphia," she said. "There's no reason this can't be the Amsterdam of the United States."