The 6 Gayest Beaches at the Jersey Shore

Where to go and what to do before the summer ends. 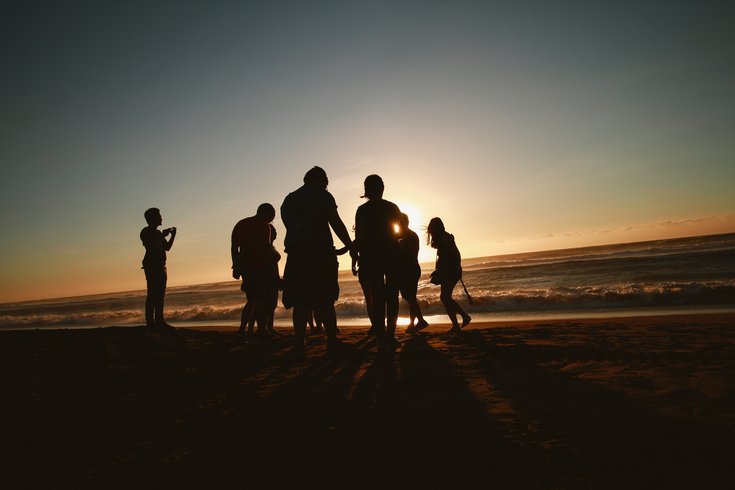 Provincetown and Rehoboth may be among the most famous gay destinations on the East Coast, but did you know that the Jersey Shore is also home to several LGBT-friendly beach communities? Within just a few hours or less from downtown Philly are stunning stretches of sand that have become both official and unofficial havens for slathering on out and proudness “down the shore.”

Asbury Park’s beach and beyond

Asbury Park has become an LGBT mecca in recent years thanks to a boom in gay-friendly shops, restaurants and nightlife less than 55 miles from New York City. And while there’s no “official” gay beach at this North Jersey hot spot, the sand between 4th and 5th Avenues at Convention Hall has become an unofficial gathering place for all things fierce. In fact, the location is ideal for catching some rays (and waves) and tapping into the mile-long boardwalk attractions – everything from noshing to shopping (there are lots of great boutiques featuring local designers).

Beyond the beach, the town is bustling with gay-friendly fun, like karaoke nights at Georgie’s Bar (yep, it’s a gay bar) and Paradise at the Empress Hotel , a gay nightclub that hosts live music and drag shows. Look for Philly’s own D.J. Carl Michaels spinning on weekends.

Sandy Hook’s Gunnison Beach (also known as “Area G”) is perhaps the gayest beach in all of New Jersey. Not only is it the only legal clothing optional beach in the state, but on a clear day beach bums can enjoy stunning views of New York City.

The federal land, managed by the National Park Service, was once part of Fort Hancock (pun intended) and now offers relative seclusion compared to many of the other much more populated (read: commercial) beaches at the Jersey Shore. Starting in the 1970s, nudists were first attracted to the area thanks to its beautiful views (you can see vistas of Brooklyn and the Verrazano Bridge) and sprawling natural habitat. Gunnison is home to the endangered piper plover bird.

Most LGBT folks like to head to the southernmost point of Sandy Hook to have fun in the sun. But a few things to keep in mind, for starters, is that it’s a bit of a hike to actually get here (the ocean is about a mile from the parking lot). And because it’s a federal land, alcohol and marijuana (despite state laws) are prohibited.

This also tends to be an adult beach – you won’t see kids running around or the usual antics that come with boardwalk culture. In fact, there is no boardwalk, so it’s best to pack a lunch and bring a cooler.

There’s also a very important unwritten rule that asks beachgoers to refrain from taking pictures of other nudists. Got questions? Consider checking out a nude beach etiquette guide before you drop trow.

And in case you’re wondering, yes, there are lifeguards at Area G. But no, they are not naked.

Surf’s up in Belmar

At the north end of Belmar in Monmouth County, near Avon-by-the-Sea and Lake Como, is a low-key LGBT-friendly beach near Second Avenue and the Boardwalk. The destination has become more popular thanks to both its natural and recreational attractions (Belmar is a very popular surfing destination).

The boardwalk, which runs from First to 20th Avenue, provides a respite from the beach with lots of shops, eateries and special events. There’s also a downtown that offers even more shopping and dining (and plenty of outdoor cafes for primo people watching). Into really fresh food for a beach picnic? Look for the weekly farmer’s market where everything is grown locally (hello, Jersey tomatoes).

Atlantic City by day and night

While A.C.’s gay scene has ebbed and flowed like the tide over the years, this famous city by the sea has been reigniting its LGBT nightlife thanks, in part, to a renaissance of drag. In fact, this summer, Philly’s own Sandy Beach is hosting a new drag review, La Cage aux Beach, at Worship Surf Bar at Showboat (you can also catch the legendary queen and A.C. alum during Putting on the Glitz at Club Unique, a new nightclub that opened at Showboat). The Rainbow Room, a gay bar on Bellevue Avenue, is another popular spot, especially on drag and leather nights.

The nightlife at A.C. has become a great addition to the beach again, which is very gay friendly and has been for decades. In fact, Atlantic City’s shorefront near Park Place and Boardwalk has long been a popular gathering spot for the LGBT community in this fabled city by the sea. Long before the casinos set up swanky beach bars, gays and lesbians have been visiting A.C. from New York and Philly thanks, in part, to its convenient location, nightlife and free beaches (no tags are required here).

Miss’d America , a popular pageant spoof that raises big bucks for LGBT charities, has also been queering A.C., as well as special events like Out at Borgata, not to mention major celebrity acts that have made this casino town a music and comedy mecca. Look for the ongoing Legends in Concert , a tribute show featuring impersonations of George Michael, David Bowie and more, at Harrah’s, as well as ABBA: The Concert – A Tribute to ABBA at Resorts, and other live acts swinging into town all year long.

Keep your pants on in Cape May

Cape May is not exactly known for its gay scene, but the beach near Higbee is a very well kept secret. Not only has Higbee Beach become a retreat from the busier beaches on Cape Island, it’s pristine one-and-a-half-mile stretch is a protected state park made for naturalists interested in bird watching, sunning and even taking the dog for a run.

You’ll know you’ve arrived when New England Road ends and opens into what seem like woods and a swamp. The beach is just beyond where, on the horizon, you might spot the Cape May-Lewes Ferry making its run.

One of the major draws here is the untouched landscape; Higbee is one of the last remnants of a coastal dune forest in the Southern Jersey Shore (some of the dunes here are as high as 35 feet). And while this used to be a popular nudist beach, it’s now illegal to sunbath without your skivvies.

LGBT folks tend to hang out between the creek at Sunset Beach near Cape May Point just along the Delaware Bay. While it’s become a pretty popular tourist attraction ( SS Atlantus and the Cape May Lighthouse are both here), the area between Sunset and South Voodoo Tree is very queer-friendly. Also, no beach tags are required.