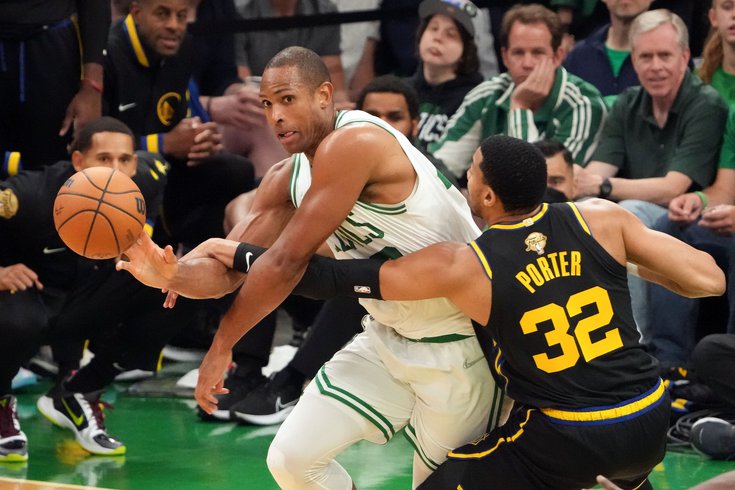 Al Horford's stint in Philly is forgettable for pretty much all parties involved.

The Sixers have been eliminated from the playoffs for what feels like an eternity, and for those who sat through and watched the miserable 2019-20 season, seeing Al Horford thrive again in Boston has had to be another gut punch among many. The hated Boston Celtics are two wins away from raising another banner, and if they get there, Horford will be a big reason why.

Horford's stellar postseason run has a lot of people finding ways to write flowery prose about him, including Jared Weiss over at The Athletic, who sat down with members of Horford's family to discuss the resurgence in Beantown. Within the piece, which hits on everything from chocolate milk to his play on the floor. But there was also a detour regarding Horford's reception in Philadelphia, where Horford's two sisters and brother weighed in on the dynamic:

The whole family, it seems, never moved on from Boston. They were fixtures at games, and Anna became a social media sensation while her brother was a foundational piece of the organization. She was heartbroken when he texted his siblings he was signing with the Sixers minutes before the news broke.

“We stayed Celtics fans when he was in Philly and when he was in OKC. We couldn’t let go,” Maria said. “They showed us so much love, and that wasn’t something we were ready to let go of, so we just never did. And we’re back!”

“Philly fans hated us there,” Anna added. “They hated us for it.”

“We continued to root for Boston, because they’re not dickheads,” said Josh. [The Athletic]

Being as charitable as possible to Horford, he alone was not responsible for his poor season in Philadelphia. A quick look around at all the other parties involved tells you that. Ben Simmons' limitations as an offensive initiator have only become more clear in the time since. Joel Embiid's night-to-night professionalism was not what it is today, the team often rising and falling based on whether he was mentally prepared to play on a given night. Josh Richardson was not cut out to be a critical floor-spacing piece on a team with few shooters. Tobias Harris was miscast in a full-time role at small forward. Hovering over all of that was a coaching staff whose message had run its course, failing to either inspire the players to better efforts or rearrange the pieces to maximize their talent. Brett Brown absorbs most of that blame as the head coach, but current Celtics head coach Ime Udoka was the defensive coordinator for a group that had the talent to be the league's best defense and never came all that close to that level of play, nor did they do much adjusting to meet the moment or an opponent.

If you're of the mindset that it never could have worked on the defensive end because they played Horford as a second big, you can shoot down that premise by pointing to Boston's ability to play out of a two-big setup this season. Different overall personnel, with Embiid certainly not as light on his feet as Robert Williams, but they underachieved as a group. The lineup numbers with either big sitting were telling: with Embiid on the floor in any lineup without Horford that season, the Sixers were 10.6 points better than their opponent, 82nd percentile on offense, and 95th percentile on defense. With Horford on and Embiid off for nearly 2900 possessions, the Sixers were 4.7 points better than opponents, 84th percentile on offense, and 61st percentile on defense.

On the other hand, there have been quite a few attempts to wipe Horford's hands clean for an ugly season in Philadelphia, which ignores the reality of that year. Brought in for both his playing ability and platitudes about veteran leadership, Horford rarely led by example on any front. He was as passive-aggressive as the rest of them were through the media, not exactly keeping problems in-house. His effort — or his ability/willingness to dial it up, take your choice of how to frame it — was as inconsistent of anybody else's on the team, even when he had opportunities to play as the solo big without Embiid. If Horford was in Philly to be a culture setter, he left with it being clear that most players will simply fall into the culture of the group.

But mostly, Horford was just not very good in the role Philadelphia needed him to play, and that would have been enough to sink any player's standing at his price tag, let alone a player who had tortured the fanbase playing for a bitter rival previously. Playing poorly and compounding it with hit-or-miss efforts after the fanbase had seen the heights Jimmy Butler could hit a season prior was a recipe for disaster, and Horford never dug himself out of that hole.

The suggestion from Horford's brother that Boston fans are, "not dickheads" and indirectly implying Philly fans are is pretty rich on multiple fronts, especially given that people from Golden State are actively complaining about treatment from Celtics fans during the Finals. And I don't mean that as a dig at Celtics fans, who in my experience are cut from the same cloth as Philly fans. They're passionate, sometimes overzealous people who will go overboard in either direction depending on how well and how hard you play for their teams. If a beloved Sixers player defected to Boston and then underachieved as both a player and leader while getting overpaid by the Celtics, I can guarantee you their family members would not be getting a hero's welcome in Southie.

Without realizing it, Horford's family provided a perfect explanation as to why the player and by extension his family never felt the love in Philadelphia (bold emphasis mine):

“I tell people I think we fully manifested his return to Boston because we all wanted it so badly. We kind of put that out there,” Anna said. “Al has alluded to that, as well. He always was homesick for Boston when he was in Philly and when he was in Oklahoma. Somehow, the stars aligned, and we got back here, and it just worked out perfectly.”

Look, at least they're able to admit that much. Horford's commitment to the organization that overpaid him and misused him was never all there, and it showed up throughout that season. Sure, he got paid a lot of money to switch allegiances and be a professional, but he isn't the first or last person to leave a place where he had success for a big payday only to figure out he didn't have what he wanted or needed at his new home.

Just be an adult and be honest about it now. Nobody hated Horford or his family because they had affection for a place that embraced them during his peak. But when you spend a year of a new relationship only half there because you can't let go of what you had with an ex, don't act surprised if you get your ass kicked to the curb.