All climbers at camps high up Everest airlifted to safety 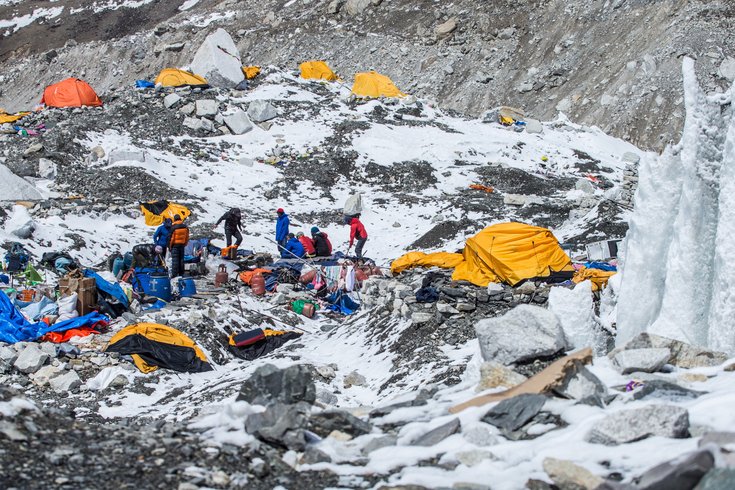 The Mount Everest south base camp in Nepal is seen a day after a huge earthquake-caused avalanche killed at least 17 people, in this photo courtesy of 6summitschallenge.com taken on April 26, 2015 and released on April 27, 2015.

All of the climbers who had been stranded at camps high up Mount Everest by a huge earthquake and avalanches have been helicoptered to safety, mountaineers reported from base camp on Tuesday.

Taking advantage of Monday's clear weather, three helicopters shuttled climbers all day from camp 1, above the impassable Khumbu icefalls, while others trekked back from camp 2 to be airlifted out.

Eighteen climbers at Everest base camp died in Saturday's avalanche that destroyed half of the tents there, according to Nepal's mountaineering association.

The huge cloud of falling snow and rock was triggered by a 7.9 magnitude earthquake that has killed more than 4,000 people across Nepal.

Canadian Nick Cienski said many of the returning climbers' tent camps had been wiped out by the avalanche which, surging at speeds estimated at up to 300 km per hour, cut a swath through base camp, hurling gear, people and tents hundreds of feet.

"Many of these people have no camps, no tents, nothing left - everything is strewn all over the glacier," Cienski said in a video dispatch recorded on Monday and posted on his Facebook page.

"The only thing they've got is what they land with in the helicopter, what's in their packs."

Around 350 foreign climbers, and double the number of local sherpa guides, had been on the 8,850-metre (29,035-foot) mountain when the worst ever disaster on world's tallest peak struck.

Danish climber Carsten Lillelund Pedersen said his team had been trekking on Saturday down from camp 2, which is at an altitude of 6,400 meters, when it was caught in a whiteout and had to turn back. He eventually made it to camp 1.

Three helicopters shuttled 170 climbers from camp 1 to base camp on Monday. Because of the high altitude and thin air, the aircraft were only able to carry two climbers at a time.

"Everest, above base camp, is now empty," Pedersen posted on his Facebook page. "A lot of gear, tents, oxygen, fuel etc is stashed a camp 2 ready to 'rebuild' later this season."

With much of base camp devastated and many sherpas returning home to see if their families and houses are safe, some expeditions have been forced to cancel their attempts to scale Everest this year.

Some, like Cienski, who plans to set a world record by scaling six 8,000-metre peaks this year, have yet to abandon their quests, despite the disaster that has overwhelmed Nepal.

Seventeen climbers died at Everest base camp while one more passed away in hospital. Sixty were hurt, 21 of them seriously or critically, said Ang Tshering Sherpa, head of the Nepal Mountaineering Association.