Allenby stands by 'kidnapped' story, says truth will come out 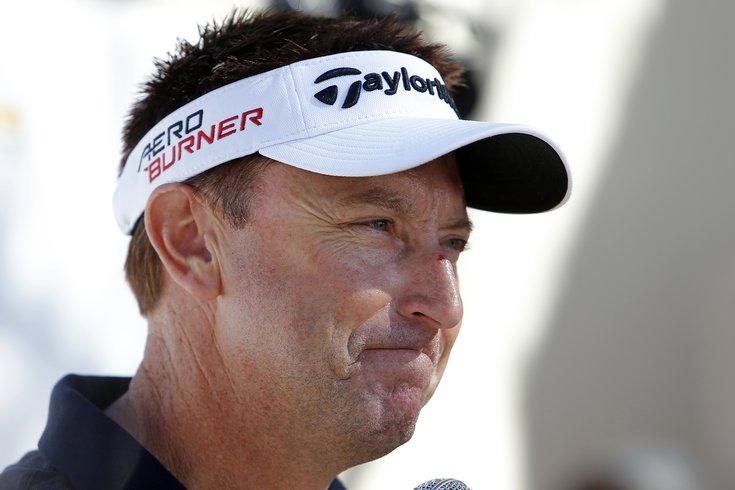 Robert Allenby talks to the media at a practice round for the Phoenix Open Tuesday in Scottsdale, Ariz.

Read More
SCOTTSDALE, Ariz.  — A defiant and at times angry Robert Allenby stood by his story Tuesday that he was robbed and beaten in Honolulu, basing the account on what he remembered and what he was told by a homeless woman who came to his aid.

"There has definitely been a lot of confusion," Allenby said. "But I think the No. 1 thing that you should all remember is that my story stays exactly the same as the way I told it. I told you what I knew, and I told you what someone told me. That's the bottom line. I never lied to anyone."

Honolulu police are investigating the Jan. 16 incident as second-degree robbery. No arrests have been made.

Allenby says he was at Amuse Wine Bar with his caddie and a friend from Australia on the night he missed the cut at the Sony Open. He said surveillance tape shows him leaving the bar with three people he doesn't recognize, and that his next memory is being in a park. He said a homeless woman told him he had been thrown out of a trunk, which he said caused his injuries.

Allenby posted a photo of his bloodied forehead and a swollen eye to his private Facebook account. He said he was robbed of wallet and phone, though the credit card he used to pay for dinner and wine was still in his front pocket.

"At the end of the day, I was in a place having a nice dinner and having a nice night, and then I became a victim. And now, it's all been turned around," Allenby said.

In the last week, however, the Honolulu Star-Advertiser quoted the homeless woman, Charade Keane, as saying she never told Allenby she saw him in a trunk and did not how he was injured. The newspaper quoted another homeless man in the park, Chris Khamis, as saying Allenby told him he was depressed and drugged at a strip club and that he passed out and hit his head on a lava rock.

Exactly what happened remains a mystery, even for Allenby. He said Tuesday he has "no memory in my brain" from about 11:06 p.m. to 1:27 a.m. on that date.

"I have been trying and overlooking and going backward and forward, and there is just nothing," he said. "I can't tell you how frustrating that is because we all want to know the truth."

The 43-year-old Australian said headaches subsided a few days ago and he chose to play in the Phoenix Open to try to get his life back on track.

His face looked relatively clean as he spoke to reporters — his injuries drew more attention than any of his 22 wins around the world — and the crowd was even larger because the podium was in front of the caddie hospitality tent.

Allenby saved his anger for the media, whom he sarcastically claimed to be "amazing experts at investigations."

"I was a victim, and all of a sudden you're putting all the blame on me," Allenby said. "I take full responsibility if I did do something wrong. ... At the end of the day, I was in a place having a nice dinner and having a nice night, and then I became a victim. And now, it's all been turned around.

"The police will come out with the right story."

Pressed for details, Allenby kept referring to the 2½-hour stretch where he blanked out. He previously told The Associated Press he had two receipts in his front pocket — along with his credit card used to pay for dinner and win — that were time stamped at 10:06 p.m. and 10:48 p.m.

Allenby said he was not drunk. "There's no way in the world what I drank could do what was done to me — not a chance in the world," he said. He also said he had blood tests to see if anything was detected in his system. He told the AP last week that doctors chose not to do a drug test the day after the incident because whatever was in his system likely would not be there for more than a few hours.

The photo, first shown on Golf Channel during the third round of the Sony Open, is what generated so much attention. Allenby said he posted it as a way to reach his family — he is divorced with a 15-year-old son and a 13-year-old daughter — because he was so disoriented he couldn't remember his phone number.

Tiger Woods, returning from his own dose of a photograph gone viral, was asked about Allenby before anyone quizzed him on how he lost his front tooth.

"I know he got beat up. I don't know much about it. I just saw a quick headline," Woods said. "I saw a photo. He didn't look very good."

Allenby has had a contentious relationship with the media throughout his career. He got into a public argument with fellow Melbourne native Geoff Ogilvy that Australian media said was close to a fight. And at the Presidents Cup in 2009 in San Francisco, he accused Anthony Kim of being out partying until the wee hours of the Sunday matches — this after Kim beat him in a singles match, 5 and 3.

The reception is gets at the TPC Scottsdale could be brutal. This is the rowdiest tournament of the year, especially at the par-3 16th that is set up like an arena.

"Mentally, I'm preparing myself for probably one of the toughest weeks of my life," Allenby said. "It hasn't been an easy week last week, and it wasn't an easy decision to come to this tournament. But I thought that I need to get my life back on track. I'm a professional golfer. And why should I let controversy put me out of the game that I love?"