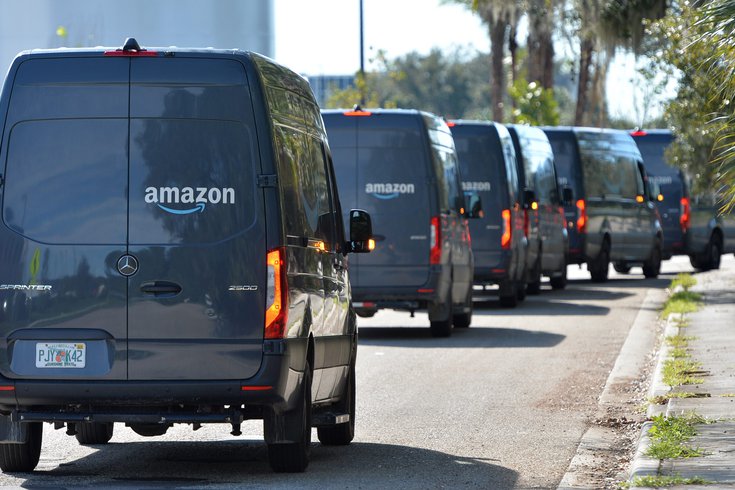 An Amazon delivery driver allegedly punched and kicked a man in the Roxborough section of Philadelphia on Dec. 14, 2021. The incident started with an argument about the driver's truck blocking traffic on the street. Above is a file photo of Amazon delivery trucks outside a company distribution center in Florida.

Philadelphia police are searching for an Amazon delivery driver who allegedly attacked and threatened to shoot a man after he complained about her truck blocking traffic in Roxborough, authorities said.

The incident happened Tuesday afternoon along the 500 block of Martin Street, where the Amazon driver had double-parked her vehicle and left the flashers on in order to make a series of deliveries. After a line of about 10 cars became backed up along the road, some motorists started shouting at the delivery driver for her to move her vehicle and let traffic pass, according to police.

A portion of the argument that ensued was captured on video by a neighbor, whose clip later surfaced on Twitter. In it, the Amazon driver can be heard responding to one of the drivers who shouted at her to leave. "Bro, I will really shoot you," the Amazon driver says in the video. "Stop testing me, bro. Stop f***ing testing me. I swear to God." (Note: This video contains explicit and violent language)

Some time after the exchange seen in the video, the Amazon driver allegedly assaulted a man, punching him in the face and kicking him in the chest, police spokesperson Eric McLaurin said Wednesday.

"The female then got back in the Amazon truck and went back to work like it was nothing," McLaurin said.

Police did not identify who the man was who got punched and kicked, and it is unclear whether it was someone from one of the cars stuck behind the Amazon truck or another person on the street. McLaurin said the complainant in the police report possibly may have been someone else who became involved in the dispute, and the extent of any injuries suffered was not known.

After the incident, the Amazon driver drove eastbound on Martin Street. The case is being handled by Northwest Detectives.

An Amazon spokesperson confirmed on Wednesday that the company is looking into the incident, but declined to share any additional information about the driver or Amazon's cooperation with law enforcement.

The city's Office of Transportation, Infrastructure, & Sustainability revealed this month that it is partnering with the Office of Innovation and Technology to test a new traffic reduction program. The system will work by enabling delivery drivers to reserve loading spots online ahead of time, mirroring a similar program that has been implemented in Washington, D.C.

Delivery drivers employed by Amazon, its logistics partners and other shipping companies have been under heavy strain as the economy continues to face supply-chain issues and labor shortages. Drivers are limited by law in their ability to work overtime, meaning that fewer drivers are left to deliver more packages in shorter timeframes than other times of year.

The city is in the process of finding a technology partner for the loading zones initiative and plans to test the new program for one year beginning in March.

Tuesday's incident also comes as Philadelphia nears the end of its deadliest year on record for homicides, which topped 530 on Wednesday. The escalating rate of gun-related violence has divided city leaders and frayed the nerves of communities across Philadelphia, who may hear the Amazon driver's threats as a frighteningly clear expression of the dangers that surround them.