Implant allows amputees to control bionic legs with their thoughts 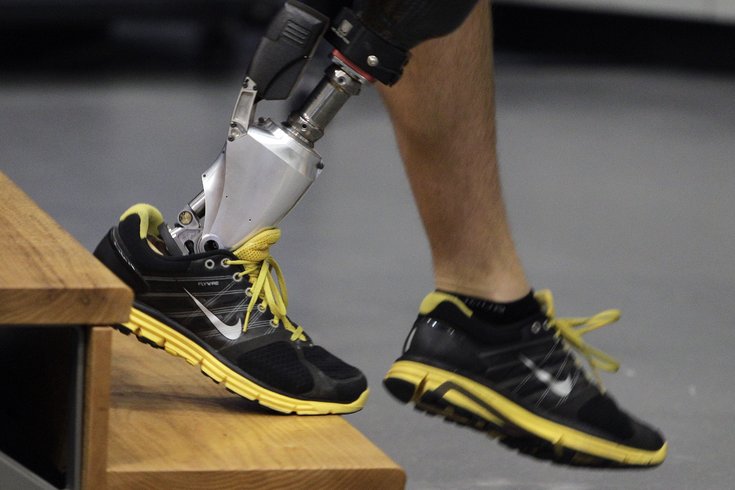 Amputees can control their bionic prosthetic limbs with their minds, thanks to tiny implanted myoelectric sensors (IMES) developed by Icelandic orthopedics company Ossur and surgically placed in a patient's residual muscle tissue.

Ossur implanted tiny sensors in the residual muscle tissue of two amputees that they say trigger movement in the prosthesis via a receiver. Ossur President & CEO Jon Sigurdsson was due to announce in Copenhagen on Wednesday (May 20) that the two amputees are the first world-wide to be able to control their lower-limb prostheses subconsciously.

One of the patients trialing the new implants, Gummi Olafsson, lost his right foot and lower leg years after a childhood traffic accident. He said the implants allowed him to control his bionic leg and foot almost instantly.

"As soon as I put my foot on, it took me about 10 minutes to get control of it. I could stand up and just walk away. Come back, sit down, use my muscles to move my foot in the position I wanted to use it. It was, like you couldn't believe the feeling when you were moving your ankle. It was really strange. I couldn't explain it. It was like, I was moving it with my muscles, there was nobody else doing it, the foot was not doing it, I was doing it, so it was really strange and overwhelming," Olafsson remembered.

The signals sent from the brain to nerve-endings in muscles that prompt movement continued even when Olafsson used a different prosthesis that did not have the receiver. He said it was frustrating to be unable to control the foot once more.

The Implanted Myoelectric Sensors (IMES) measure 5 millimeters (mm) long and 3mm wide and were provided by the United States-based Alfred Mann Foundation, which develops medical technology for use in patients.

Olafsson said his body continues to adapt to his prosthetic limb more each day, allowing him increased control of it.

"Your muscles are always getting bigger, so you get more control over it. So everyday if you are using it, you're always getting more and more control over what you're doing with your foot, so in a way, everyday you're learning more about how to walk properly with the foot, how to use it to go downhill, uphill, downstairs, upstairs, even sitting down and standing up from a chair," he said.

He has been living with the IMES and an Ossur bionic limb for over a year. Ossur plans to continue assessing the technology with clinical trials.

Orthopedic surgeon, and Ossur's director of research and development, Thorvaldur Ingvarsson implanted the sensors in the two patients involved in the trial himself while they were under local anesthetic in what he said was a straightforward procedure. Ingvarsson said the new technology allows the patient's brain to control both subconscious and intentional movements.

The mobility technology company has designed the system to be compatible with its current bionic devices, which already automatically adapt to their user's gait, speed and the ground terrain, but still require intentional thought.

Ossur says it will be more of a technology "upgrade" for its current patients and anticipates that the system will be on the market within three to five years.

Ingvarsson said Ossur was on the way to creating prosthetics that are more integrated with their user.

"Our ultimate goal is to replace the function of the lost limb, and we've been doing so step-by-step and doing very well. However, as our technology move on - you have sensors for muscles, you're able to replace function by the new mind-controlled prosthetics - the next step might be to get sensing from the environment so you have a feedback loop," he said.

The company says the device is the first to use an implanted sensor inside the patient's body, whereas other mind-controlled prosthetic technologies involve transplanting muscle tissue from another part of the body and repurposing it, requiring neuroplasticity (brain retraining) to operate.