Atlantic 10 comes to Brooklyn with much to sort out 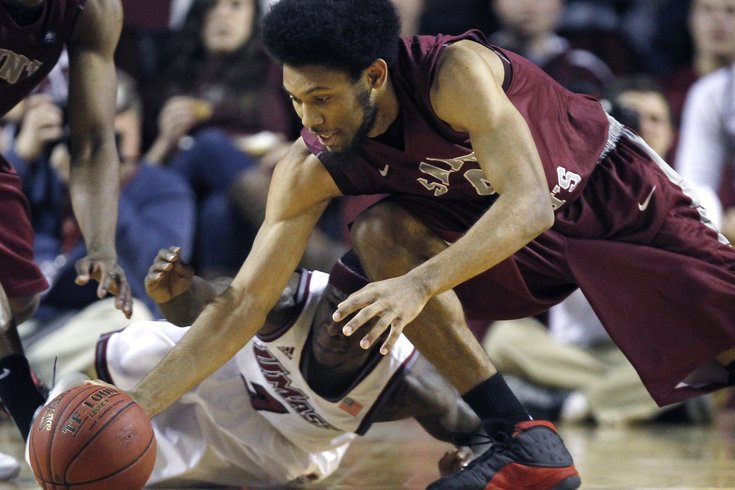 St. Joseph's DeAndre Bembry led the Atlantic 10 in scoring with a 17.9 ppg average.

NEW YORK  — The Atlantic 10 gathers in Brooklyn this week with much uncertainty.

There is no clear favorite to win the A-10 tournament and even the top seeds don't seem to have NCAA at-large bids locked up. A year after sending six teams to the NCAA Tournament, three seems a more realistic goal for the A-10.

The result: There will be a lot of very meaningful games played at the Barclays Center from Wednesday through Sunday.

"I don't know if there's one (team) you can just pencil in and say these guys are going to sweep through the whole thing, but I would say most of the better leagues are like that," VCU coach Shaka Smart said. "The top of the top leagues, they have great battles. The ACC has four, five Final Four contenders. We don't necessarily have that, but we have quite a few really, really good basketball teams."

The Rams and Dayton (23-7, 13-5), last season's NCAA upstarts, appear to be the safest bets for an at-large bid to next week's big tournament. The Flyers are the second seed.

Conference newcomer Davidson (23-6, 14-4) is the top seed in its first Atlantic 10 tournament after finishing a surprisingly successful regular season with nine straight wins to surge into NCAA conversation.

Rhode Island (21-8, 13-5), the A-10's other surprise team this season, is the third seed and light on NCAA resume-building victories.

Richmond's two victories against crosstown rival VCU dropped the Rams into the fifth slot and a Wednesday game. Smart's team will need four wins in four days, including a third meeting against the Spiders, to win its first A-10 tournament championship.

Here are some things to watch as the Atlantic 10 tries to crown a champion and boost some NCAA credentials in Brooklyn.

VCU star point guard Briante Weber was lost for the season with a knee injury 11 games ago and the Rams have not been the same since.

The senior averaged 8.1 points and 4.3 assists per game, but it was as the first line of defense in Smart's Havoc pressure where Weber flourished. He was on pace to set the NCAA career record for steals. Smart said Weber averaged 11 deflections per game.

"We are still in the process of getting used to and learning how to play without Briante," Smart said. "He was such a focal point of our team. Not just in terms of statistics or minutes, but in terms of our identity. He was such a part of what we did as a team."

The bright side of this tough stretch for the Rams: All but one of the five recent losses been close and they have been in a dreadful shooting slump which is bound to turn around.

NEW KIDS ON THE BLOCK

This was supposed to be a step-back season for Davidson after making the NCAA Tournament six times since 2002 out of the Southern Conference. The Wildcats were picked to finish 12th in their first A-10 season.

The A-10 competition didn't faze coach Bob McKillop's team. The Wildcats were the highest-scoring (80.6) and most-accurate shooting (47.6 percent) team in the conference.

"I've been shocked we have performed as well as we have," McKillop said.

Coach Archie Miller guided the Flyers to the Elite Eight last season and might have done an even better job this season, nearly winning the conference, essentially using seven players.

• Sixth-seeded George Washington was an NCAA tournament team last year that brought back in a lot of experience, but fell short of lofty expectations. Still, the Colonials are one of the best rebounding teams in the league, shoot the 3 OK and could be a tough matchup for Rhode Island in the quarterfinals.

• Saint Joseph's has maybe the most gifted and dynamic player in the conference in DeAndre Bembry, the conference's leading scorer. The Hawks are the 10th seed and open Thursday night against St. Bonaventure. The winner moves on to play Dayton.