The contribution was made by the Commonwealth Children’s Choice Fund, a political action committee that supports charter schools and vouchers 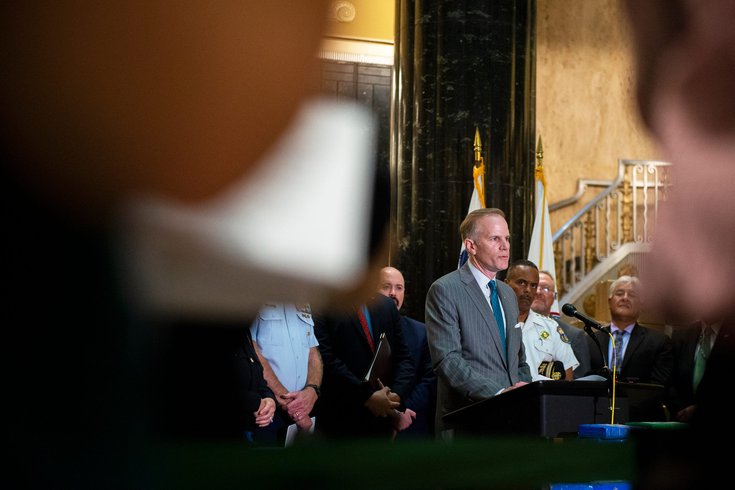 Bill McSwain, a candidate in Pennsylvania's Republican primary race for governor, received a nearly $5 million contribution from the Commonwealth Children’s Choice Fund. McSwain raised over $6 million for his campaign in April, beating out all of his opponents.

Pennsylvania Republican governor candidate Bill McSwain raised more than $6 million in April, easily surpassing his primary opponents, but most of it came from a single political-action committee championing school choice.

McSwain's eye-popping haul reported in the campaign finance filing for the period covering March 29 to May 2 was boosted by $4.9 million in contributions from the Commonwealth Children's Choice Fund.

The fund's website says it "supports candidates for state and local office in Pennsylvania who are passionate about expanding educational opportunity for children throughout the commonwealth."

McSwain, a former U.S. attorney in Philadelphia in the Trump administration, also reported receiving nearly $2 million worth of in-kind contributions from the Commonwealth Leaders Fund, which shares a Steelton, Pennsylvania, address with the Children's Choice Fund and, according to TransparencyUSA.org, is the major contributor to the Choice Fund.

The largest in-kind contribution, dated April 15, from the Leaders Fund for McSwain was $1.88 million for mail.

Overall, McSwain carried over $1.7 million from the last report then raised $6 million and spent $7.2 million, leaving him with $474,000 in available cash. More than $6.5 million of McSwain's spending during the reporting period from March 29 to May 2 was on ads and media buys.

State Sen. Doug Mastriano, widely considered the frontrunner in the crowded field based on recent polling, reported raising the least among the four leading candidates, but finished the reporting period with the most available cash for the final weeks leading to the May 17 primary.

After the reporting period, Mastriano has raised another $32,000.

Business owner and former Delaware County Commissioner Dave White rolled over $171,300 from the previous report, but raised $2.4 million, while spending $2.28 million. White had $282,000 in available cash at the reporting deadline.

White, owner of an $85 million-a-year HVAC company, also reported contributing $1 million to his own campaign on April 4 and receiving a total of $1.25 million from Michael Karp, the owner of University City Housing Co. in Bryn Mawr, Pa., in two contributions of $250,000 and one of $750,000.

In the days after the May 2 reporting deadline, White also reported raising more than $204,000, including several individual contributions of $5,000 and $10,000.

Corman reported in subsequent daily reports, though, that he received another $285,000, which included $250,000 from the Build PA political-action committee based in Coraopolis near Pittsburgh.