A day later, a possibly rabid bobcat was captured after attacking dog 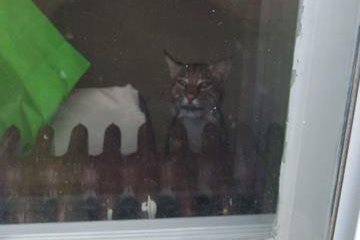 Washington Township police captured this images of a bobcat that wound up inside a home, trapping a mother and her two children in the bathroom on Wednesday. The bobcat later left the house and ran into the woods. It is not clear if that bobcat was the same cat that was captured in the township after attacking a dog the next day.

Bobcats caused a stir in a New Jersey township this week.

Police in Washington Township, Morris County, said a mother and her two young children encountered a bobcat, New Jersey's only wild cat, in their home on Wednesday.

A day later, officers there trapped and killed a possibly rabid bobcat that had attacked a dog on Thursday.

It was not clear whether the cat captured Thursday was the same one that trapped the woman and children in the bathroom of their East Mill Road home on Wednesday.

In a press release posted to the department's Facebook page, police  said two officers saw the bobcat on the first floor of the house, and that it did not show signs of rabies or any other illness. The bobcat manned the house for about an hour before exiting through the kitchen window and running into the woods.

No one was injured and the bobcat didn't make contact with anyone, police said. There was no damage to the residence, they said.

"Common sense probably suggests it was the same bobcat, but we don't know that. It's not certain," Hajna said.

A township resident called police Thursday evening, saying their dog had been attacked in the backyard. The dog was injured and taken to a veterinarian, police said.

Two officers then received a call about a bobcat at another residence, where they isolated it in a barn. A state Department of Fish & Wildlife officer captured and killed the bobcat with a snare.

The cat's carcass was taken to a lab for testing.

Once a widespread animal in New Jersey that nearly went extinct in the second half of the 20th century, the still-endangered bobcat is the last remaining wild cat to inhabit New Jersey. Typically, they are shy animals seldom seen by humans, although their increasing numbers in the state over the years have made it more common, according to Fish & Wildlife

As bobcat populations continued to plummet, Fish & Wildlife brought 24 bobcats from Maine and released them in New Jersey between 1978 and 1982. Populations have risen steadily since the early 1990s.