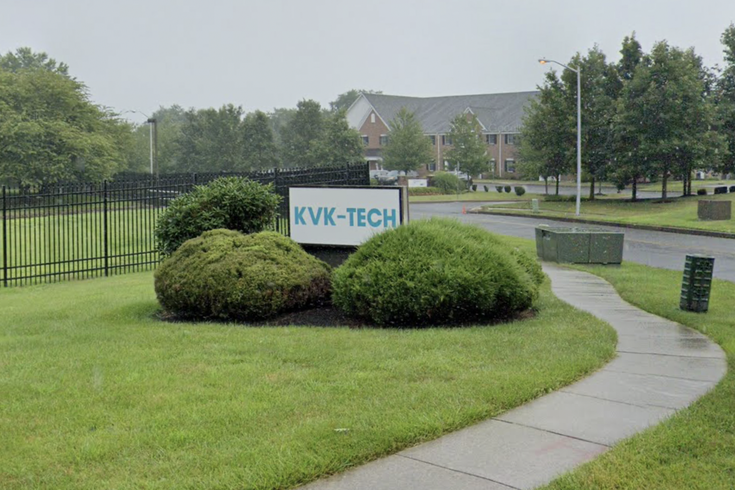 KDK-Tech is a generic drug manufacturer based in Newtown, Bucks County. Federal prosecutors say the company and two executives conspired to defraud the FDA and sold drugs using unapproved ingredients.

A generic drugmaker and two executives based in Bucks County are facing federal charges over an alleged conspiracy to evade regulatory requirements and sell a prescription anxiety medication with an unapproved ingredient.

KVK-TECH, based in Newtown, allegedly misled the U.S. Food and Drug Administration and concealed information that could impact drug safety and effectiveness, according to federal prosecutors. The executives, Murty Vepuri, 69, and Ashvin Panchal, 50, were charged with conspiracy for their alleged roles in impeding the FDA's mission.

According to prosecutors, Vepuri led day-to-day operations at KVK-TECH and made all key business decisions for the company, including those relating to regulatory compliance. Vepuri previously owned a generic drug manufacturer in New Jersey that was subject to a restraining order due to an ongoing FDA investigation. He allegedly hid his involvement at KVK-TECH by placing its ownership in private trusts for the benefit of his children.

Vepuri told the FDA he was an advisor and consultant to KVK-TECH, despite his alleged role as the company's key decision-maker.

Along with Panchal, KVK-TECH's head of quality assurance, Vepuri allegedly ignored regulatory requirements that might have slowed the manufacture, distribution and sales of its drugs. The two men are accused of giving false explanations to the FDA when violations were identified, telling inspectors the issues were the result of a mistake or misunderstanding. They allegedly promised to address the violations, but never pursued corrective measures.

Their indictment points specifically to the company's manufacture of hydroxyzine, a generic anti-anxiety medication sold under the brand names Vistaril and Atarax. According to investigators, Vepuri purchased an active pharmaceutical ingredient from Mexico-based Dr. Reddy's Laboratories even though the company is not an FDA-approved source.

Prosecutors allege Vepuri and Panchal knew the ingredient was considered adulterated and that Dr. Reddy's Laboratories had violated the FDA's good manufacturing practices. The Mexican lab's violations were so severe that the FDA issued an import alert for its products from 2011 through 2013.

As alleged in the indictment, KVK-TECH sold more than 383,000 bottles of the unapproved hydroxyzine without the FDA's knowledge or approval.

KVK-TECH was founded in 2004 and produces generics for a number of drugs, including the weight loss medication Lomaira and the muscle spasm drug Flexeril. The company has been in the midst of an expansion, including the current construction of a 250,000-square-foot sterile injectable plant in Langhorne and the purchase of the 461,000-square-foot Lockheed-Martin complex in Newtown.

"FDA laws and regulations regarding drug composition, manufacturing, quality and related controls are designed to protect Americans' health and safety – so we can all be confident that our prescription medications will be safe and effective," acting U.S. Attorney Jennifer Arbittier Williams said. "When companies attempt to game the system to avoid these regulations and increase their profits, the ramifications are potentially catastrophic. As this indictment makes clear, any individuals or companies that try to evade the law in this manner will be brought to justice."

If convicted, Vepuri and Panchal each face a maximum possible sentence of five years in prison, three years of supervised release, a $250,000 fine and other financial penalties, including forfeiture. KVK-TECH faces fines of up to $4 million and other financial penalties such as forfeiture and probation. The parties also face mandatory exclusion from participating in federal programs.