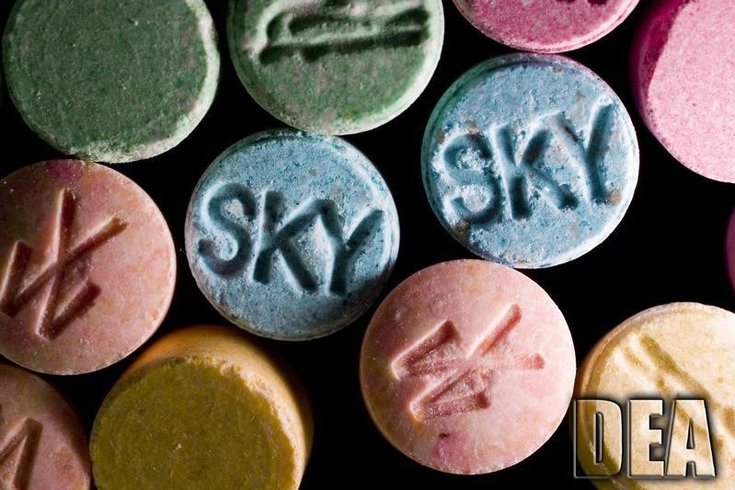 Ecstasy pills, which contain MDMA as their main chemical, are pictured in this undated handout photo courtesy of the United States Drug Enforcement Administration (DEA).

At least a dozen subjects with life-threatening diseases like cancer, and who are expected to live at least 9 months, will participate in the double-blind trial over the next year in Santa Cruz, said Brad Burge, spokesman for the Multidisciplinary Association for Psychedelic Studies, in Santa Cruz.

Each subject will be randomly given either a full dose - 125 milligrams of MDMA, or an "active placebo" dose of 30 milligrams, Burge said.

Burge said the goal is to test whether gravely ill patients suffering from debilitating anxiety, fear or depression due to their diagnoses can find a measure of peace during the extended ecstasy-influenced psychotherapy sessions.

The trial's principal investigator, Dr. Philip Wolfson, told the San Francisco Chronicle newspaper that the MDMA experience, lasting four or five hours, can be "transformationally potent" under controlled settings with a pair of trained therapists.

"It's a substance that supports deep, meaningful and rapidly effective psychotherapy," Wolfson told the Chronicle.

MDMA is a psychoactive drug that has been banned under federal law for decades.

While the Drug Enforcement Administration declined to comment, Burge said the federal agency has certified the security infrastructure of the clinic.

The Food and Drug Administration said U.S. law and FDA regulations prohibit the agency from disclosing information about drugs that are being developed and studied, said spokeswoman Sandy Walsh.

Results were expected within 12 to 15 months.

"Our hypothesis is that something is happening with MDMA that makes psychotherapy easier," Burge said.

"So with a lower dose of MDMA in the active placebo, it might fool the subject or the therapist. And by giving people the option of following up with another half dose, it just extends the window for therapy rather than making it more intense."

Those receiving the full dose have an option later to take another 62.5 milligram dose as part of the same session, and those receiving

the placebo can later re-enter the trial, he said.