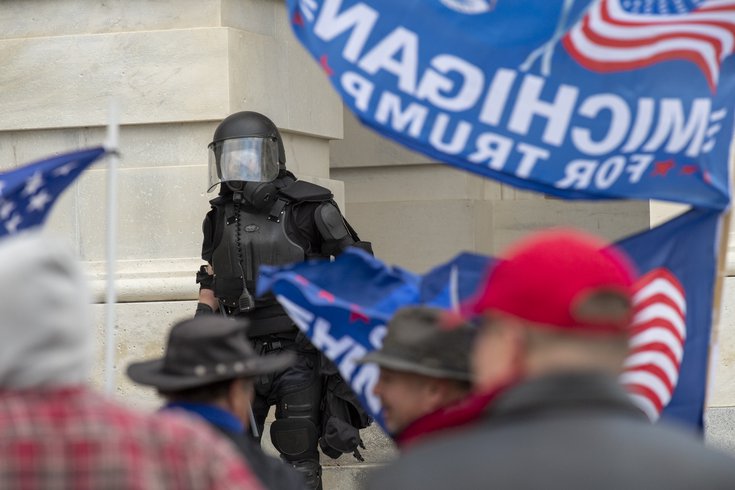 A South Jersey man was among 14 people arrested and identified Thursday morning by U.S. Capitol Police amid an ongoing investigation of yesterday's violent insurrection in Washington, D.C.

Leonard Guthrie, of Cape May, was listed in a news release announcing people arrested for unlawful entry of the U.S. Capitol, though additional details about Guthrie's alleged activities were not immediately available.

On Thursday evening, U.S. Capitol Police Labor Committee chair Gus Papathanasiou announced the pending resignation of Chief Steven Sund, who has come under heavy criticism for the department's failure to better manage the insurrection. The union chairman said officers were "frustrated and demoralized" by the absence of effective leadership throughout the crisis.

More than 70 arrests were made by various law enforcement agencies on Wednesday as hundreds of rioters overran the government building's security, or otherwise clashed with police beyond the 6 p.m. curfew.

In a separate press release from Capitol Police on Thursday, Sund said his officers had responded to reports of two pipe bombs in the area surrounding the Capitol at the Republican and Democratic National Committee headquarters. The devices were disabled and turned over to the FBI for further investigation.

A suspicious vehicle also was investigated by Capitol Police, FBI and ATF officers. Authorities found a cooler full of gasoline bombs and a long gun inside, officials said.

That press statement from Capitol Police also referenced 14 people being arrested for unlawful entry of the Capitol in connection with the suspicious vehicle investigation, but it did not name the people taken into custody.

Capitol Police did not immediately respond to a request for more information about Guthrie's arrest, or whether he was linked to the suspicious vehicle in any way.

During the mayhem on Wednesday, a Capitol Police officer fatally shot a woman inside the Capitol, who had defied an order to stand clear of an entrance. The woman, who was treated at the scene and later taken to a local hospital, has since been identified as Air Force veteran, fervent Trump supporter and San Diego resident Ashli Babbitt.

Three other people died after suffering medical emergencies during the siege.

Multiple investigations into Wednesday's incidents remain ongoing, and the FBI has established a tip line website for information related to the riots.

"The violence and destruction of property at the U.S. Capitol building yesterday showed a blatant and appalling disregard for our institutions of government and the orderly administration of the democratic process," FBI Director Christopher Wray said. "As we’ve said consistently, we do not tolerate violent agitators and extremists who use the guise of First Amendment-protected activity to incite violence and wreak havoc. Such behavior betrays the values of our democracy. Make no mistake: With our partners, we will hold accountable those who participated in yesterday’s siege of the Capitol."