Chip Kelly: DeMarco Murray isn't the only one who needs more touches 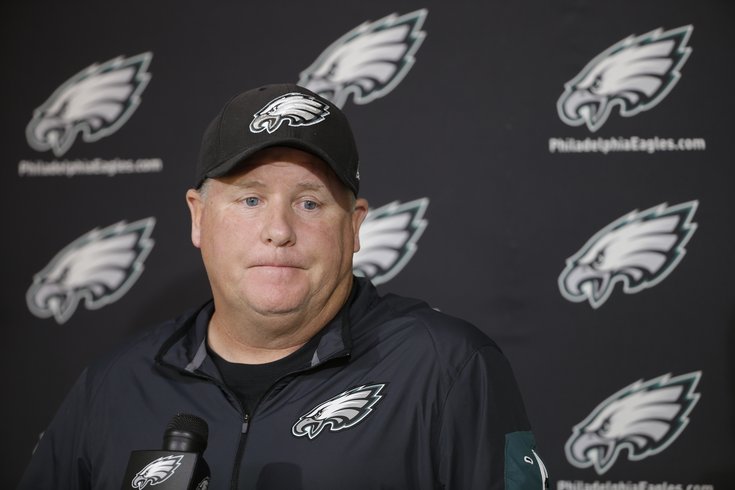 Eagles coach Chip Kelly addresses the media on Monday, a day after his team's 23-20 loss to the Redskins.

Following Sunday's 23-20 loss to the Washington Redskins, Eagles running back DeMarco Murray, who led the NFL with 1,845 yards on 392 carries a season ago, voiced his frustrations with a lack of touches so far this season.

"Do I think I'm touching the ball [enough]?" Murray said. "No, I'm not. I don't think I am. But it's the plays that are being called. I love this offense. I love playing with these guys. It's just how it is."

Through three games -- Murray missed last week's win over the Jets with a hamstring injury -- the former Cowboys rusher has carried the ball a total of 29 times for 47 yards (1.6 YPA), 30 of which came on his first carry of the game Sunday, and a touchdown. He also has 11 receptions for 76 yards and a TD. Through his first three games last season, Murray had 71 carries for 385 yards (5.4 YPA) and three touchdowns to go with seven receptions for 62 yards.

That's quite a drop -- both in volume and efficiency -- so it's easy to see why Murray is frustrated with his lack of touches so far this season. And on Monday, head coach Chip Kelly said he had no problem with his running back's comments.

"We all should be getting more touches on the offensive side of the ball," Kelly said when asked if Murray should be getting the ball more. "But when you only have 51 snaps on offense, there aren't a lot of touches [to go around]. So if we can stay on the field and snap it for 68-70 plays, then we're going to have a lot more balance in our run and pass game because we're on the field more."

Not only does Kelly understand the 27-year-old's point, but he embraces it.

"I want all of our guys at the running back, wide receiver spots to want the football," Kelly said. "I don't think you want someone that says, 'I don't want the football.' I think it's what you're looking for.

So why have the Eagles struggled to run as many plays this season, while allowing opponents to run more than in either of the previous two seasons?

According to Kelly, it's about execution. A drop here or a missed block there is the difference between extending a drive and being forced to send the punting unit out there. But as the weeks roll on, and the losses pile up, the Eagles coach is left looking for answers on how to fix this lack of execution.

"I wish I knew [why the Eagles aren't executing the plays], because then we would go out there tomorrow, fix it, and get ready for the Saints," he said. "I think it's a matter of -- and you see it a lot -- someone makes a play and makes a spark and then everybody kind of feeds off of that. It's such a game of confidence and as you see it being played out across the league, you see that with a lot of teams."

Unfortunately for the Eagles and their fans, those big spark-plug plays are often accompanied by a penalty or followed up by a turnover. Just look at the Nelson Agholor one-handed catch from Sunday. On the very next play, the rookie wideout fumbled on a reverse, and gave the ball back to Washington. In the Cowboys game, the defense made a big play to force a fumble late in the game. On the very next play, a botched snap handed the ball right back to Dallas.

At some point, however, Kelly is going to have to take a hard look in the mirror and decide whether or not these players -- the ones that he brought in, while letting other, Pro-Bowl caliber players walk -- are capable of executing.

At some point, he's going to have to say the thing we all dreaded hearing from the previous regime.

At some point, he's going to have to put his players in a better position to make plays. And if that doesn't work, he may need to put them in a different uniform.