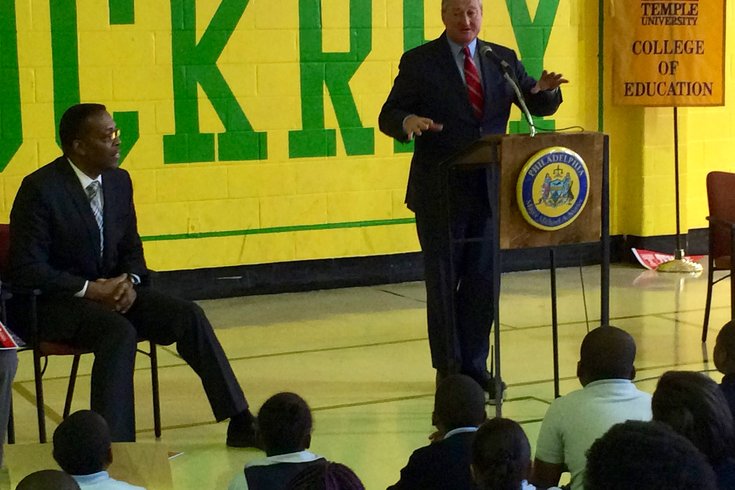 City officials gathered at Tanner G. Duckrey Elementary School in North Philadelphia, on Monday morning, to discuss lessons they have learned from a recent trip to Cincinnati, Ohio, to learn about the school system there and how some of the ideas that work there could be implemented into Philly's schools.

As explained by mayor-elect, Jim Kenney, he, and a group that travelled to Ohio last week -- including city council president Darrell Clarke (D-5th dist.) and Otis Hackney, the principal of South Philly High School who has been tapped to be Kenney's chief education officer -- learned about a "community schools" program that brings government and community resources to schools in an effort to improve education opportunities for local kids.

"Our job is to make sure you reach the potential you have in your life," Kenney told a room full of school children on Monday.

While the mayor-elect acknowledged that its too early to discuss just how this community school plan would work in Philadelphia -- he said they still need to talk to parents and teachers at schools throughout the city to determine what each school needs -- Kenney shared ideas he saw in Ohio that he thought could work here.

One example he said, are services for optometry and dentistry that he witnessed during a visit to an Ohio school. He noted that these examples only happened because the community and government are working hand in hand with schools to provide these services.

"If a child can't see a blackboard or a whiteboard, the child can't learn," Kenney said, saying that vision checks could help students academically.

By looking at what services the government already provides and by reaching out community partners - notably the business and philanthropic communities - and focusing these resources to the city's public schools, Kenney said, schools could improve across the board.

"We are constantly committed to providing these services every day," said Kenney.

Instead, the city could fund these services similarly to how it is done in Cincinnati where nonprofit partners bill Medicaid for many of the services or partners help raise needed funds. Clarke said many of the city's colleges and university are already on board to help start the community school plan.

Just how this would work in Philadelphia, however, is a little unclear, said Hackney. He said that it's too early to say exactly what sort of services or changes would be implemented in Philly schools.

"It's not just one thing," he said. "Each community school will be different."

Hackney said he's planning to evaluate schools throughout the district, work with teachers and parents at schools and determine what the best recourses and services the city can help bring to each school to best support students. Hackney said that he plans on doing community outreach to have more of a plan organized when Kenney takes office in January.

"We are still working on a model," he said. "When we can put these resources together, we can really transform these schools."