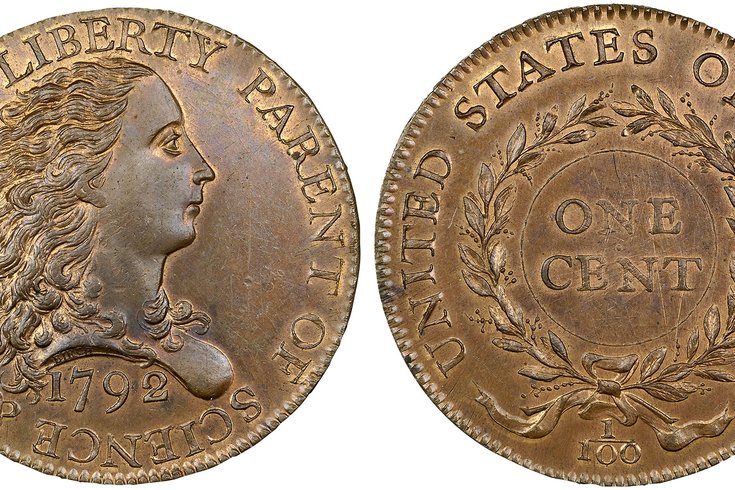 An experimental U.S. penny struck to test a design in 1792 that sold Jan. 8, 2015 for $2.6 million to a California man, according to Heritage Auctions in Dallas. The rare coin is called the "Birch cent" after engraver Robert Birch.

LOS ANGELES - A Beverly Hills rare coin dealer purchased a 1791 American penny for nearly $2.9 million, the most ever paid for a one-cent piece at auction.

Named after its engraver, Robert Birch, the so-called "Birch Cent" was among the first pennies struck for the United States, part of a series of prototype coins. Only 10 are believed to exist and collector Kevin Lipton said the coin he purchased is in the best condition of those 10.

"I felt elated, just wonderful,” Lipton, 65, of Lipton Rare Coins Inc said Monday of his winning bid made last Thursday at the Heritage Auction in Orlando, Florida. "I thought the coin would bring more money. This was a really good buy."

One side of the Birch Cent features the profile of Lady Liberty with flowing hair and the motto “Liberty Parent of Science and Industry.” The other side says “United States of America” and gives the denomination “One Cent” within a wreath.

"It’s a gorgeous coin, breathtaking,” Lipton said. “And the history is important. This is our earliest depiction of what we thought of ourselves as a nation.”

Jim Halperin, co-chairman of Liberty Auctions, said the $2,858,000 Lipton paid for the coin tops a record set the day before at the same auction - $2.35 million for a 1793 “chain cent,” named after the chains around the denomination.

Lipton, who plans to hold onto his new purchase for himself for now, said he was so excited to get the coin that the next day he spent another $1.9 million for the “Wright quarter,” America’s first quarter.