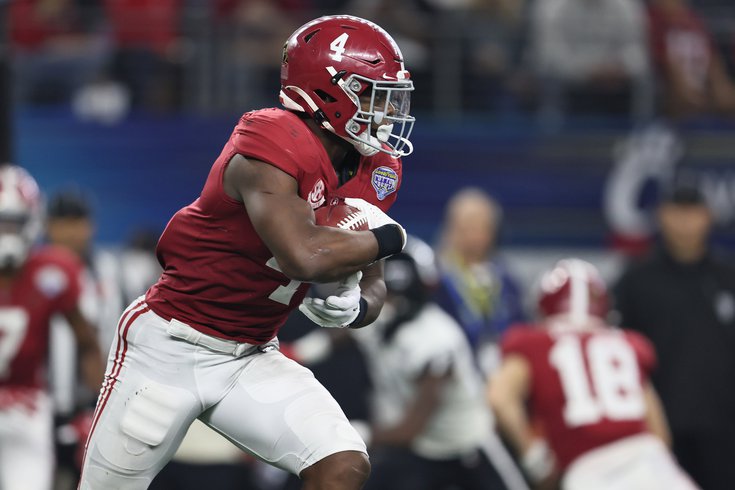 During the college football season each year, as long as you're watching the games, we point out five players each week to keep an eye who make logical sense for the Eagles in the following year's draft. Here are some Alabama and Georgia players that we missed during the season who will be playing in the National Championship Game.

In case you missed Bama's win over Cincinnati to get to the National Championship Game, Robinson ran all over the Bearcats, as he and the Bama offensive line were just to physical for Cincy's defensive front. He finished with 26 carries for 204 yards.

Over his career at Alabama, Robinson has been behind guys like Najee Harris, Josh Jacobs, Damien Harris, and Bo Scarbrough, and as a result only had 274 career carries in four years heading into the 2021 season. In 2021, it was finally Robinson's turn, and he carried 248 times for 1268 yards (5.1 YPC) and 14 TDs.

Robinson is a big back, as you can see, at 6'1, 225, and while he isn't often going to break off long runs, he is a hard runner who makes opposing defenders put him on the ground. He is also a competent pass catcher out of the backfield. He could be a younger replacement for Jordan Howard.

Battle is an instinctive, playmaking safety who has three pick-sixes over the last two seasons. In 2021, he had 81 tackles to go along with three INTs. For those of you who follow college football closely, he's also the guy who kept Auburn's running back off the ground and shuttled out of bounds, stopping the clock and giving Bama's offense a chance to win that game, which they eventually did.

The Eagles have a clear need at safety, and after Kyle Hamilton of Notre Dame, this draft class has a deep group of guys who could go Round 2.

White was a five-star recruit out of high school (10th in the nation, per Rivals). He was sort of thought to be the next in line of great Georgia running backs, after Todd Gurley, Nick Chubb, Sony Michel, and D'Andre Swift, but he suffered an ACL tear his senior year in high school, and then another one his freshman year in college. At Georgia, he has not had the same explosive impact as those other great Georgia running back prospects.

He is a physical, "one cut and go" downhill runner, who also excels in pass protection. In three years at Georgia, he has 369 carries for 1959 yards (5.3 YPC) and 24 TDs. He is not much of a threat out of the backfield as a receiver, as he only has 17 career catches. A look:

White is a tough inside runner who could be a cheap rotational guy on Day 3.

The Eagles love versatile offensive linemen like Salyer, who has played all five OL spots over the course of his career at Georgia. In the NFL, he'll very likely be a guard. Here he is at LG against Cincinnati in the Peach Bowl a year ago:

Isaac Seumalo has been unable to stay healthy in recent years, and the Eagles would be smart to find a player who can replace the flexibility that a healthy Seumalo gives them. Day 2 guy.

Like White above, Smith was a highly rated prospect coming out off high school (2nd in the nation, via Rivals), who had the best SPARQ rating in his recruiting class. (That means that he's an incredible athlete, in case you're unfamiliar with SPARQ.)

Smith had an immediate role in Georgia's defense as a true freshman, but his production has left something to be desired. 2021 has been his best year, as he has 46 tackles, 3.5 sacks, one INT, and three forced fumbles. Here he is against Georgia:

Smith should probably stay in school another year, but I like him as a SAM in Jonathan Gannon's defense if he comes out.

If there are some Bama or Georgia players you like that you think we missed, they might be below... 👇