Healthy Cooper-Grant neighborhood seen as bridge to rest of Camden 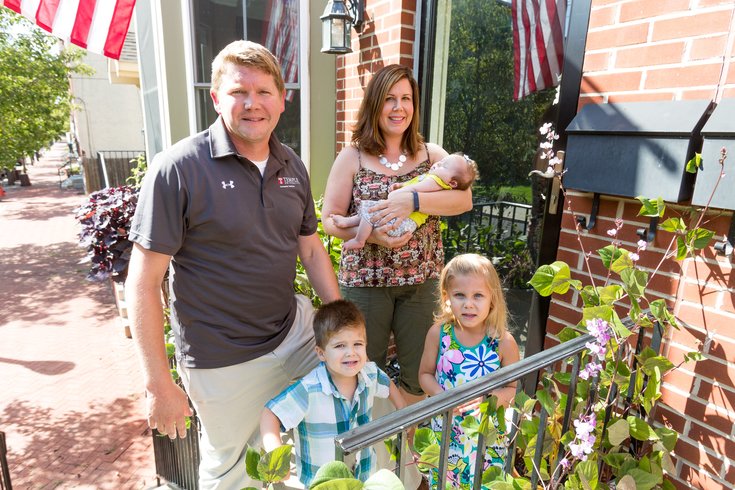 Since 2014, there’s been a steady trickle of stories with the same general theme about Camden.

The city is “on the cusp of a revival.”

It may be the next Brooklyn. Hoboken. Jersey City.

And while there are indeed positive signs in the city regarding crime, education and big-time development on the waterfront, most of the accounts fail to look at the small building blocks of neighborhoods needed to align for that redevelopment to happen in a more than skin-deep fashion.

Most of the stories, in fact, fail to even mention any neighborhood other than the waterfront, the largely barren touristy area closest to Philly, or the city’s downtown, five blocks away, centered around City Hall.

Overlooked in between, there is a sliver of a neighborhood in between: Cooper-Grant. At just 130 residential buildings, it is easy to see why. 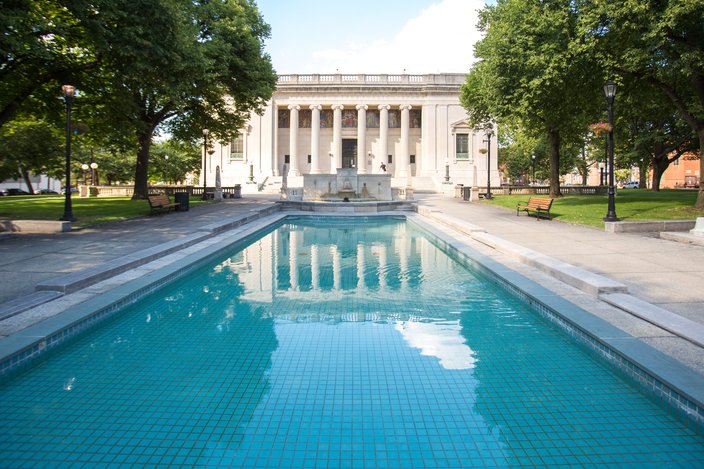 Patrick Miner, a frequent blogger on urban issues who recently moved into the neighborhood, wrote this summer that his “gut instinct suggests to me that central Camden is moving toward being to Philadelphia what Hoboken is to Manhattan.”

Miner cites the walkability and streetscape, the price differential between Cooper-Grant and Philly neighborhoods, its small arts scene, some of the proposed development in the area and the transportation infrastructure. He's a contracted engineer who does work on the adjoining Ben Franklin Bridge, though he prefers biking.

And up to a point, Miner makes valid points in his blog about the appeal of Cooper-Grant, though his take is the highly personal view of a well-paid white professional without children – hardly a typical Camden resident’s profile.

But first the positives, then the "buts." 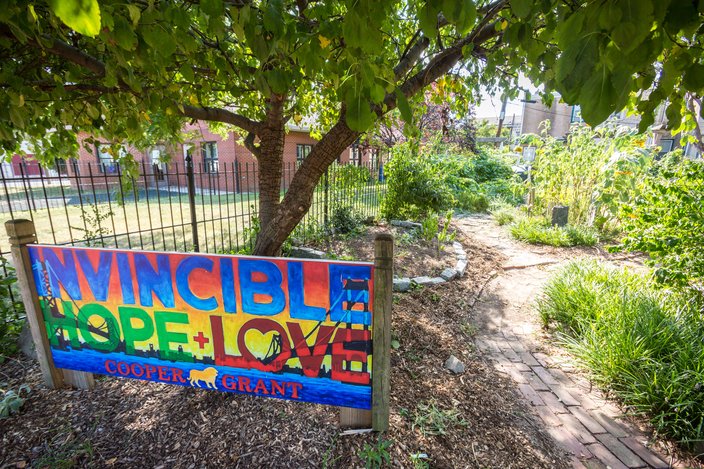 The Cooper-Grant neighborhood recalls the look of Philly’s Society Hill. It’s on the National Register of Historic Places. There’s a park, an arts center, a working space for an artist in a restored firehouse and neighboring Rutgers University-Camden.

It is hemmed in by the Ben Franklin Bridge and Rutgers to the north, the city’s commercial downtown to the east, the waterfront to the west. The street boundaries are roughly Friends, Linden, North Front, North Second, Penn, and Point, a tidy 250 acres.

The neighborhood has excellent access to roadways and also public transit, especially via PATCO, the rail line paralleling the Ben Franklin Bridge, a 24/7 link to Philly.

It isn’t just the landscape, though, that set the Cooper-Grant neighborhood apart.

The residents of Cooper-Grant are whiter, better educated and more affluent than the rest of Camden.

And with county, university and transit police all assigned to the area, it has the least violent crime in a city frequently scarred by crime.

Latko points out a major issue facing the neighborhood as well as the rest of Camden: Property values in the city continue to depreciate, even in his stable neighborhood, perhaps the only neighborhood without a single abandoned home, though there is the shell of Radio Lofts marring the landscape. 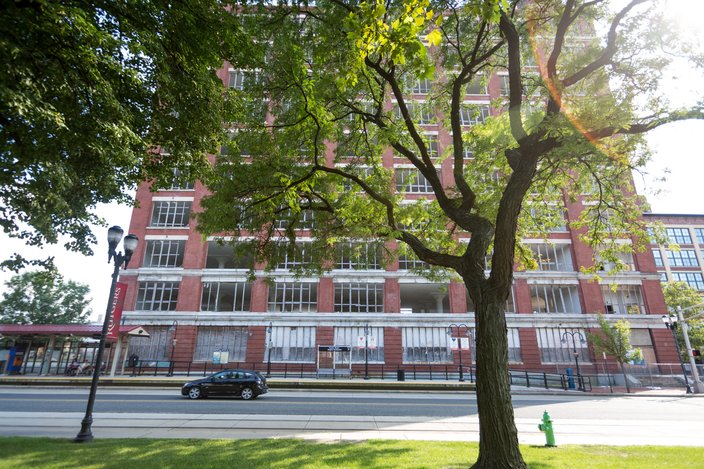 The Radio Lofts, which were gutted years ago sit unsecured and unfinished with an uncertain future.

Latko bought his house, a new home designed to look like the traditional homes of the neighborhood, in 2008 – just as the real estate bubble burst.

And yet the average sale price in his neighborhood now is only about $145,000. That is well above the average price – only in the mid-$20,000s – that homes in Camden sold for – on average – at the end of last year.

“I’m married to the house,” said Latko, who teaches at Temple University’s School of Business and works in information technology. “It is not sellable.”

On the other hand, Miner did not even consider appreciation when house hunting. His older rowhome just a block from Latko cost only $100,000, so he has less to worry about.

Journalist Tara Nurin was the first person to buy one of the new homes in Cooper-Grant in 2008. Convenience and good transportation were her main incentives.

The beverage writer loves the home and her neighborhood community is  “an unbelievable perk” – a refrain heard from Latko and Miner.

But she wishes it had what similar Philly neighborhoods have in abundance: high-end bars and coffee shops which function as neighborhood meeting places.

The persistent poor quality of Camden schools is what has driven many who first moved to Cooper-Grant to move away when their children hit school age, Latko and Nurin said. 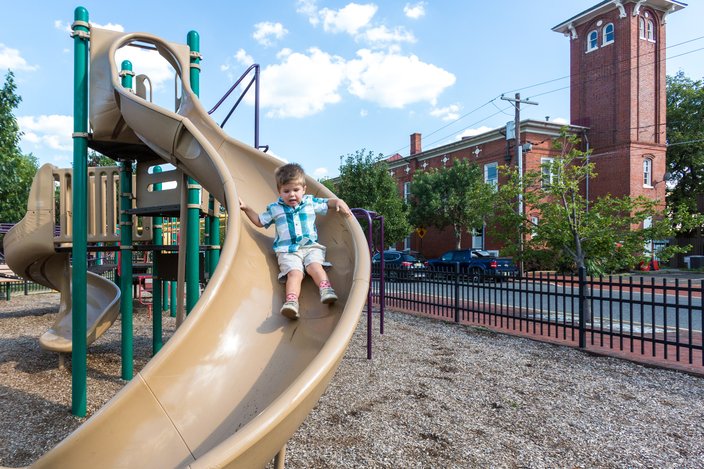 River Latko enjoys the playground in the Cooper Grant neighborhood. The neighborhood has periodic access to the Rutgers University turf field that borders to the North.

“I can’t send my kids to school here,” said Latko. “People get burned out here” dealing with such issues and costs.

“There’s a brain drain,” he added.

Latko said Rutgers is a mixed blessing because student renters often represent “quality of life” issues in the neighborhood when rentals – not owner-occupied homes – account for better than 60 percent.

Many rentals start as unregistered, thus uninspected by the city, he added.

One place that is registered and a focal point for the neighborhood is the Victor Building, a rental high-rise that offers Philly-style amenities and river views for a far cheaper price.

Rutgers professor Stephen Danley made his home there due to convenience and community, but he admits the adjoining commercial downtown lacks the amenities he and his wife would like to patronize.

Latko said the city has slowly gotten better at listening to neighborhood concerns, but issues, such as unruly crowds from nearby concerts and more mundane issues such as clean streets, remain. 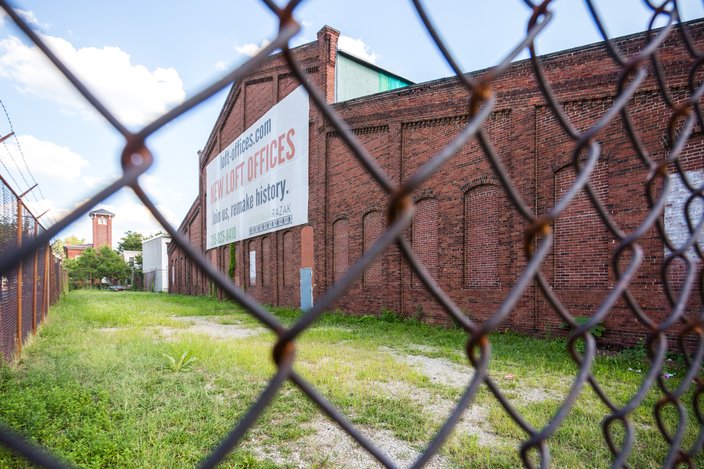 This existing 45,000-square-foot warehouse will be converted into a 75,000-square-foot work space. In the time before it's transition, an 'art box', a pre-fabricated shipping container will be placed on the green space and will serve as a pop-up art gallery for the city's 'Third Thursday' art crawls.

Latko realizes his neighborhood is seen as something of a bridge to the large-scale development planned on the waterfront. Relatedly,  a $16 million dollar grant secured by the city is meant to spread the streetscaping of several blocks near Cooper-Grant, but north of the Ben Franklin Bridge.


“If just 10 people who start out renting on the waterfront decide to buy and live here eventually, it will change our community,” said Latko.

“That would change our community,” he added. “We need more people [owning] here. Gentrification is a 1970s term.”

Allan Mallach, one of the country’s leading housing experts, said there is no sign of gentrification anywhere in Camden.

But attracting more people to live in homes they buy in Camden is the only real path for revitalizing neighborhoods, Mallach added.

That means the only way development on the waterfront can filter to the other neighborhoods of Camden is by spreading outward through Cooper-Grant.

It will be very difficult for the benefits of revitalization to spread in Camden because most neighborhoods “look like Swiss cheese,” torn apart by decay, abandonment and demolition, he explained.

Which means the tiny enclave of Cooper-Grant could potentially play an outsized role in bringing revitalization to the rest of the city.

“It has the potential to get there,” Mallach said.