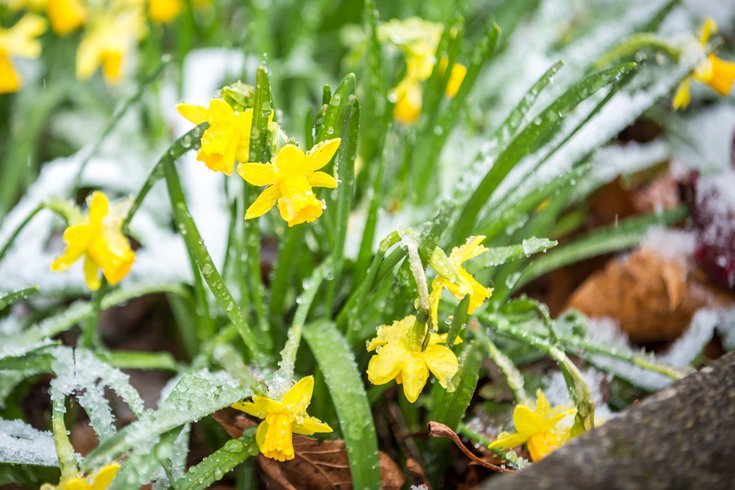 Snow falls on flowers in Philadelphia during a snowstorm on March 10, 2017.

The Philadelphia Flower Show arrives each March, an annual reminder that spring blossoms are just around the corner.

But each year, Mother Nature seems bent on pointing out that the spring equinox does not come for several more weeks.

So, it comes as no suprise that a nor'easter is expected to dump 4-6 inches of snow in Philadelphia on Wednesday, with the northern and western suburbs anticipating as much as 12 inches.

That's just the way it seems to go during the Flower Show. Philadelphia has experienced measurable snowfalls during four of the last five flower shows, including the current edition.

"I think Mother Nature wants to attend the show as well, so she shows up every year," Flower Show spokesman Kevin Feeley said. "It's quite funny. Even this year, it's not one, but two nor'easters."

The first nor'easter dropped 3.5 inches of snow – and plenty of trees – on Friday and Saturday, just as the Philadelphia Horticultural Society opened its latest show, coincidentally dubbed "Wonders of Water."

Looking beyond Wednesday's forecast, a third nor'easter could move in Sunday night – just as the show comes to a close.

Regardless of Wednesday's forecast, the show will go on. The Flower Show will open at 10 a.m. – the same time it does on any weekday, whether it's sunny, cloudy or rainy.

"It's really giving us a challenge," Feeley said. "But we've got a rainforest built inside the convention center, so if people are trying to escape this delay of spring, they could not find a better place."

For people who can safely attend the Flower Show during inclement weather, it often provides a prime viewing opportunity free of crowds.

"We (often) get some snow or rain or freezing rain – or whatever it is," Feeley said. "Through all of that, the show stays open. Some of those days, if people can get here safely ... it's actually a great time to see the show."

SEPTA Regional Rail trains will operate on a Saturday schedule (that means fewer trains running), with enhanced Wilmington/Newark Line service to Newark and Churchmans Crossing stations. Additionally, the Cynwyd Line will not operate. 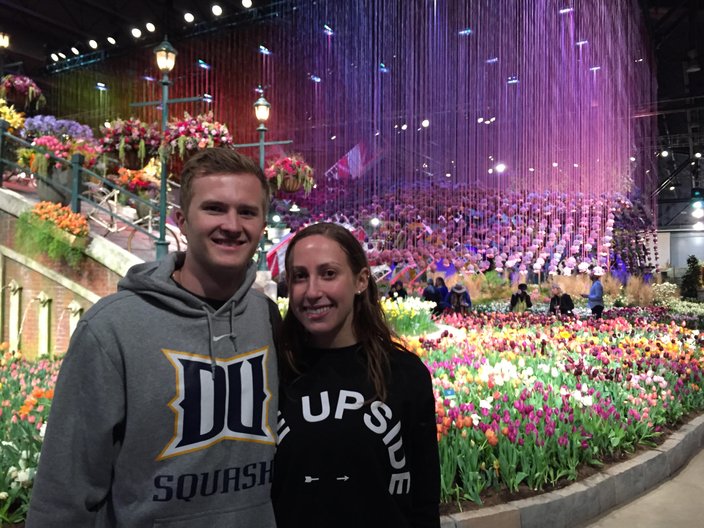 Last year, Superstorm Stella dumped 5.2 inches of snow in Center City, according to Wunderground.com. That left the Flower Show void of crowds, but some people braved the elements.

"We walked all the way here," Morgan told PhillyVoice last year. "It was a trek. It was an interesting experience coming down here."

And in 2013, when forecasters predicted a Philly snowstorm that ultimately fell flat, PHS president Drew Becher blamed radio and television stations for a $1.2 million loss, accusing them of hyping forecasts.

Prior to that, the Flower Show had dodged significant snowfall since 2009, when the opening weekend of the "Bella Italia" show was met with nine inches of snow.

"The show certainly has an interesting history with inclement weather," Feeley said.

The table below provides a snapshot of when measurable snow has fallen during the flower show over the last 10 years.

With snowfall predicted for Wednesday, Feeley said some bus groups either moved up their trips to Tuesday or postponed them until later in the week.

"Tickets that people buy are honored throughout the week," Feeley said. "A ticket is not for a specific day. You can change your plans around the weather. We are open until Sunday. ... There are plenty of days to see the show after Wednesday."

But for those looking for an incentive to attend on Wednesday – aside from fewer crowds – the Philadelphia Water Summit will go on as scheduled. The all-day event includes a discussion led by Mary Ellen Weber, an astronaut and competitive diver.

Because, as we've learned over the years, the Flower Show always soldiers on.