Mehmet Oz doubtful to get his TV show back after losing U.S. Senate race in Pennsylvania 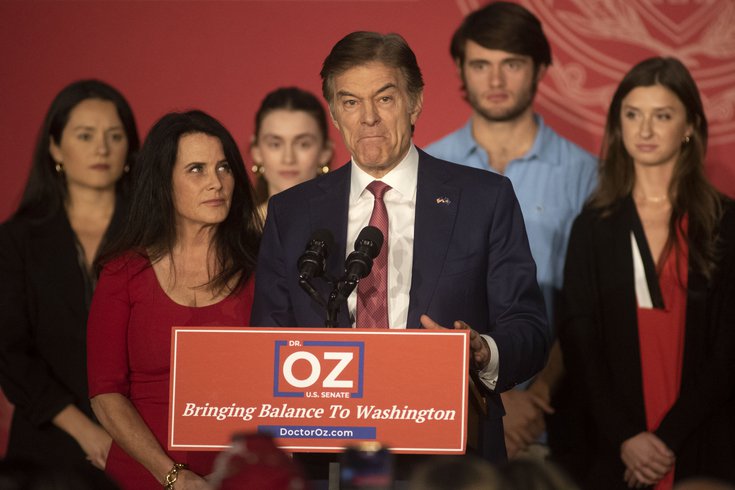 Dr. Mehmet Oz lost his Republican bid for the U.S. Senate in Pennsylvania in 2022 midterm elections, falling to Democrat John Fetterman. What comes next for the retired surgeon may be impacted by the fallout of the election.

Mehmet Oz has kept a low profile since he was defeated by John Fetterman in Pennsylvania's U.S. Senate race earlier this month, a critical midterm contest that helped Democrats hold onto the upper chamber of Congress.

Entering Election Day, many political observers had believed Oz would take down Fetterman, who struggled in an October televised debate that renewed concerns about his recovery from a stroke. In one of the most acrimonious races in the country, Fetterman's Pennsylvania roots helped him overcome that skepticism, while Oz's loss raised questions about why he was unable to land a Senate seat that the GOP already held.

It's not yet known how Oz, 62, aims to bounce back from his unsuccessful foray into politics. In order to make his run, the retired heart surgeon and syndicated television doctor had to give up "The Dr. Oz Show," for which he'd won multiple Daytime Emmy Awards during its 13 seasons on the air.

If Oz is hoping to revive his show, it may not be easy for him to convince producers any time soon.

"I can't imagine 'The Dr. Oz Show' being rebooted at this point," Robert Thompson, professor of television and popular culture at Syracuse University, told The Wrap on Monday.

The tabloid RadarOnline quoted an unnamed insider who said Oz is now being confronted with the stark reality of having entered politics, which inherently makes him more of a divisive figure than he was previously.

"He can't even get a word with his former producers," the unnamed source said. "Dr. Oz is a social creature who likes to hear himself talk, and it's beginning to dawn on him that he's just not wanted in Hollywood circles anymore."

Another unnamed source described Oz as desperate to get his show back.

"He's beating the bushes to revive his health-oriented talk show and groveling to everyone he knows to give him a break, but he's not making much progress," the source said.

The tabloid also reported that Oz has "impressed execs" at Fox News and Newsmax, but hasn't received any offers for his own show. He appears likely to make cameos on right-wing networks, but that could also hinder his efforts to get back to what he was doing before his run in Pennsylvania.

"If he wanted to go back to TV, and he was to be done with politics, he could cut the cord on his conservative path," said Eric Schiffer, chairman and CEO of Patriarch Equity, an investment firm that also offers reputation and management consultation. "In fact, he would be advised to do that because he's going to want the widest audience. Why cut off 50% of your audience?"

A particular challenge for Oz will be that the demographics of daytime TV viewership skew toward women, many of whom may be put off by the Oz campaign's support of the U.S. Supreme Court's overturning of Roe v. Wade.

The dirt flung during the campaign also will be a roadblock for Oz, whose history of questionable medical claims was examined by The Washington Post. Oz also was criticized for supporting past research experiments that killed hundreds of dogs and for appearing in front of a vintage car made for Adolf Hitler during a pre-election fundraiser.

Schiller told The Wrap that Oz could benefit from limited awareness of the particulars of his Senate campaign outside of Pennsylvania.

"There's still a core audience that's available to him," Schiffer said. "I don't think there's going to be significant negative implications from that election, and people forget over time as well."

Fox News contributor Joe Concha suggested that right-wing radio could be a successful avenue for Oz, if he's willing to further build a Republican brand. On the other hand, Oz may not be the most welcome voice among conservatives at the moment.

"The last thing that conservatives want to hear right now is Dr. Oz giving political advice," Concha told The Wrap. "I think there is some resentment that he lost such a winnable race."

In the aftermath of the election, former President Donald Trump, who endorsed Oz, denied reports that he was angry about the advice he received from some of his advisors to favor the former TV host over ex-hedge fund CEO David McCormick in the Republican primary. McCormick, who narrowly lost that race, reportedly will consider running for Senate again in Pennsylvania, according to Bloomberg.

After calling Fetterman to concede the Senate race earlier this month, Oz released a statement urging unity around addressing the nation's problems.

"We are facing big problems as a country and we need everyone to put down their partisan swords and focus on getting the job done," Oz said. "With bold leadership that brings people together, we can create real change."

In his first tweet since the election, Oz shared a positive message on Thanksgiving — but his path forward now looks murky as he takes full stock of the hit his reputation has suffered.

Wishing you all a joyous Thanksgiving. I’m appreciative of my many new friends this year and am especially grateful for the freedoms with which we are blessed in America.