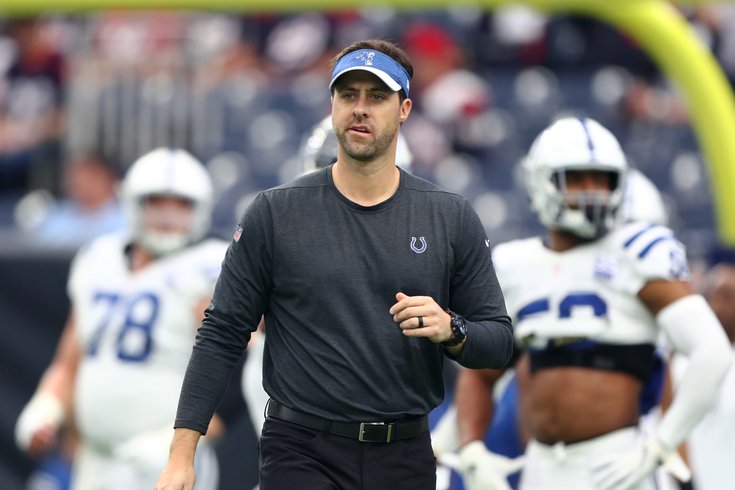 Now that the Philadelphia Eagles have hired their new head coach, they will begin to focus on filling in the rest of their staff. And so, like we did with the head coaching search, we'll continually update our assistant coaching tracker as updates trickle in. Bookmark, please.

• Jonathan Gannon: The Eagles have reportedly "agreed to terms" with Gannon to be their DC. Gannon coached the Colts' secondary, and is largely credited with the development of their young and effective corners and safeties. Gannon reportedly drew interest from several teams, but will be able to run his defense in Philly while working under an offensive-minded head coach.

• Shane Steichen: The Eagles reportedly interviewed Steichen on Sunday as well. He was the Chargers' offensive coordinator in 2020 under Anthony Lynn, and has been at least partly credited with the development of then-rookie quarterback Justin Herbert.

More on Steichen here. And here.

UPDATE: Adam Schefter is reporting that Steichen is expected to become the Eagles' new OC.

• Curtis Modkins: The Eagles reportedly interviewed Modkins on Sunday. He is currently the Denver Broncos' running backs coach, and has two previous stints as an offensive coordinator, both times for a head coach that ran their own offense.

• Dave Fipp: Fipp was reportedly initially blocked from interviewing elsewhere, but according to Bo Wulf of The Athletic the Eagles will now allow him to explore other opportunities, which is probably just a nice way of saying he's out.

• UPDATE: The Lions announced that they have hired Fipp.

• Michael Clay: The Eagles are interviewing Clay for the open special teams coordinator job, according to Matt Barrows of The Athletic. Clay was formerly with the Eagles in the Chip Kelly days, when he was a defensive quality control coach initially, and later a special teams assistant under Fipp.

Clay left with Kelly for the 49ers in 2016, where he has been the assistant special teams coach since.

• Kevin Patullo: Per John Clark, the Eagles hired Patullo to be their passing game coordinator, a job title he also held with the Colts in 2020. Patullo is 39 years old,, and has been coaching in the NFL since 2007. He has had stints with the Chiefs, Bills, Titans, Jets, and Colts, mostly coaching wide receivers, but with some experience coaching quarterbacks as well.

• Brian Johnson: The Eagles have reportedly hired Johnson, who was Florida's offensive coordinator.

• Jeff Stoutland: The Eagles will be bringing back their well-respected offensive line coach for his ninth season with the team. That's good news for guys like Andre Dillard and Jordan Mailata, who won't have to start over learning new techniques from a different OL coach.

• Duce Staley: Staley wants out of his contract to explore other coaching opportunities, according to John Clark. Can't blame him.

Update: Duce will be joining the Lions' staff, per Jason La Canfora. He'll be the assistant head coach and running backs coach in Detroit, which were his same titles in Philly.

• Aaron Moorehead: Moorehead will remain as the Eagles' wide receivers coach in 2021, per Geoff Mosher.

• Justin Peelle: The Falcons announced that they hired Peelle to be their new tight ends coach.

• Tracy Rocker: The Eagles have targeted Rocker to be their D-line coach, according to Pete Thamel. Rocker is currently with Auburn, and he is a defensive line lifer, as he has a long list of defensive line jobs. In chronological order: West Alabama, Troy State, Cincinnati, Arkansas, Ole Miss, Auburn, Georgia, Tennessee, South Carolina, and then Auburn again. He also coached the D-line for three years with the Titans.

• Ken Flajole: Flajole reportedly won't be back in 2021, and may retire.

• Nick Rallis: The Eagles have hired Rallis to be their linebackers coach, per Mike Kaye. Rallis has been coaching in the NFL for three years, all with the Vikings, both as a defensive quality control coach, and as their assistant linebackers coach. Rallis is only 27 years old.

• Dennard Wilson: The Eagles are hiring Wilson to be their "secondary coach," per Rich Cimini of ESPN. To be determined if that job title is exactly accurate, but it appears he'll be coaching defensive backs in some capacity. Wilson has been coaching in the NFL since 2012, with the Rams and Jets. He was also a scout with the Bears for four years prior to his coaching career. Wilson was most recently the "passing game coordinator" in addition to being their defensive backs coach for the Jets.