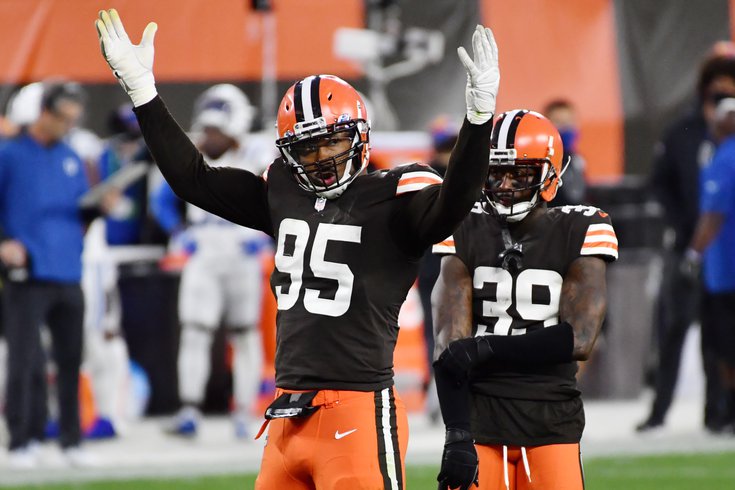 The Philadelphia Eagles are perhaps as healthy as they have been all season, as a handful of players returned to action last Sunday against the New York Giants, and LG Isaac Seumalo is expected to return this Sunday against the Cleveland Browns. The Eagles remain 3-point underdogs, according to TheLines.com's consensus odds.

• S Rudy Ford: It feels like the Eagles' special teams only guys, Ford and Craig James, take turns landing on the injury report. They'll both be out this Sunday.

• It's also worth noting here that the Eagles will be without passing game coordinator/QB coach Press Taylor and WR coach Aaron Moorehead on Sunday as a precaution.

• LG Isaac Seumalo (21-day practice window activated): Seumalo could be added to the 53-man roster on Saturday, but for now he remains on IR, which means the Eagles don't have to give a status for him on the injury report. Doug Pederson said on Friday that he fully expects Seumalo to be cleared and ready to go for Sunday.

If the Eagles do indeed activate him on Saturday, Seumalo will start at LG, and the rest of the line will likely look like this:

• LB Nate Gerry: Gerry is obviously not a fan favorite these days, but he is a starter who never came off the field, so the Eagles had to figure out how to reassign his role. Against the Giants, it was Alex Singleton. To be determined if that changes this week.

• RG Brandon Brooks (PUP): Brooks is in the conversation for 'best RG in the NFL," so obviously, losing him for the entire season has hurt. The Eagles have had a revolving door at RG all season.

• RG Wyatt Teller (calf): Teller is the Browns' starting RG. He's an athletic lineman, who is particularly effective in the run game.

• LB Mack Wilson (hip): Wilson played in all 16 games as a rookie, starting 14. He had 82 tackles, an INT, a forced fumble, and a sack. He's had more of a part-time role this season, after returning from a hyperextended knee. He is now also dealing with his hip injury.

• WR Odell Beckham: We all know OBJ well, having played with the Giants for five season. He had 23 catches for 319 yards and 3 TDs in 2020, before being lost for the season with a torn ACL.

• S Grant Delpit: Delpit suffered a torn Achilles and is done for the season. Delpit was thought of by some as a likely first-round pick in the 2020 NFL Draft, but fell into the second round, where the Browns selected him with the 44th overall pick. He was poised to start at S for Cleveland as a rookie. Instead, Andrew Sendejo has filled in.

• CB Greedy Williams: Williams was a second round pick of the Browns in 2019, who started 12 games as a rookie. He suffered a nerve injury in his shoulder during training camp.

• DE Myles Garrett: As we noted in our five matchups to watch, Myles Garrett leads the NFL both in sacks (9.5) and forced fumbles (4). Most of his sacks have come against opposing left tackles this season, but he lines up outside, inside, and on both the left and right sides. He is an elite player, with length, strength, speed, flexibility, and balance. Garrett was ruled out, so Jason Peters dodges a bullet.

• OT Chris Hubbard: Hubbard has played in 76 career games, starting 47, including 7 games played this year, with 4 starts. He's the first guy off the bench at several OL spots.