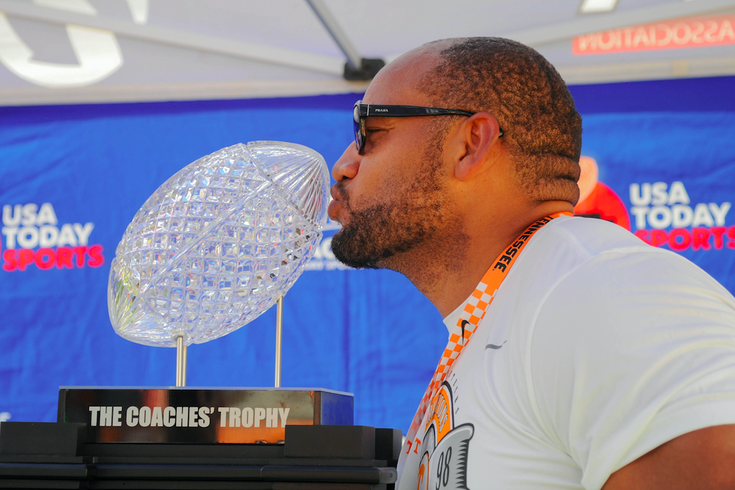 Darwin Walker played six seasons with the Philadelphia Eagles from 2001-2006. He won a NCAA national championship in 1998 at the University of Tennessee. Nowadays, Walker is an investor in commercial real estate, including two Wawa locations in South Jersey.

With the churn of NFL rosters from year to year, it's easy to lose track of players from previous eras who are no longer actively involved with football.

Darwin Walker played defensive tackle for the Philadelphia Eagles from 2001 to 2006, recording 24.5 sacks in that span before finishing his career with the Chicago Bears and Carolina Panthers.

Walker won a national championship with the University of Tennessee in 1998 and appeared in a Super Bowl with the Eagles in the 2004-2005 season.

While we hear horror stories about former pro athletes blowing through their fortunes, Walker had an investment plan in motion well before he made it to the NFL.

Now 42, Walker recently sat down for an interview at his alma mater in Knoxville, where he earned a degree in civil engineering. He has an extensive portfolio of commercial real estate that includes the sites of two Wawa stores in South Jersey.

Walker owns properties lease by Wawa for its stores Berlin and Somerdale, Camden County, according to the Philadelphia Business Journal. The Berlin property was reportedly acquired earlier this month for $3.6 million, while the Somerdale Wawa site was purchased for $3.1 million.

It's worth noting that Walker is not involved in the operation of either store. Wawa does not franchise its stores, and they are often located on leased properties. So don't go bugging him for free Sizzlis or anything.

Other properties Walker owns include Bojangle and Panera Bread franchises. He started his own engineering firm while he was an Eagle and later merged it with Philadelphia-based Pennoni, where he remains on the board of directors.

The investment in the Wawa site comes as the convenience store chain continues to expand into new territory, announcing this week that it will invest in 40 new locations in northern Virginia over the next 15 years.

As for Walker, he may not be playing football anymore, but he's still paying attention, as evidenced by his reaction to last weekend's Lions game.

This is ridiculous!!!!! Backup or not it’s your job to catch the damn ball!!!!! You have been doing it your whole life. If I was the @Eagles I would cut every damn one of my backup receivers!!!!!!!!!!!

The Eagles' 34-27 win over the Packers on "Thursday Night Football" may have calmed him down a bit.