DeMarco Murray spent most of Eagles' loss on the sideline 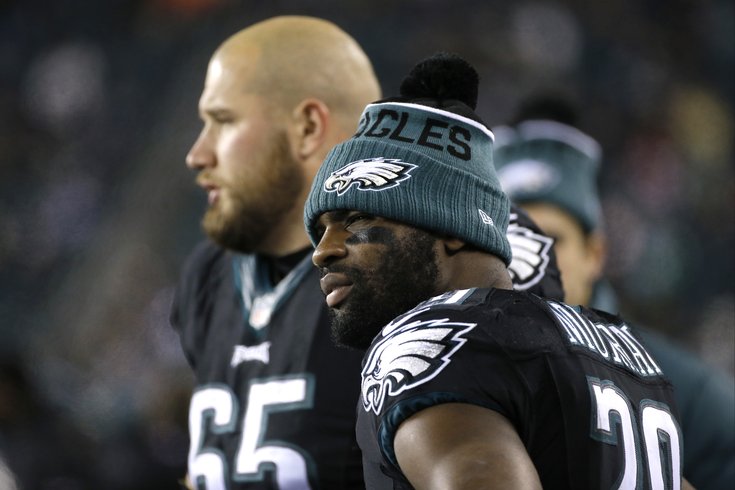 Philadelphia Eagles running back DeMarco Murray looks on from the sideline during his team's 40-17 loss to the Arizona Cardinals.

Last year at this time, Philadelphia Eagles running back DeMarco Murray was well on his way capturing the NFL rushing title. Now, through 14 games in midnight green, the former Cowboy is 24th in the league in rushing with 603 yards and has fewer rushing touchdowns (4) than Kirk Cousins (5).

Over the last several weeks, Murray has seen his role in Chip Kelly's offense continually diminish -- he's carried the ball just 20 times in the last three games combined -- and it hasn't much mattered who was carrying the ball for the Eagles, so long as it wasn't the reigning rushing champ. Even while Ryan Mathews was sidelined with a concussion, it was backups Darren Sproles and Kenjon Barner receiving the extra touches, not the $40-million free agent the team signed in the offseason.

But against the Arizona Cardinals on Sunday night, the season hit a new low for Murray, who carried the ball just twice for three yards in the 40-17 loss. Overall, he was on the field for just eight total snaps, most of which came in the third quarter. In fact, his first carry of the game didn't come until midway through the third quarter.

After the game, Kelly said the plan was to "rotate the running backs" and attributed Murray's lack of carries to the fact that none of his backs ran particularly well. While that may be true, they did run the ball 17 times with either Sproles or Mathews, the latter finishing with a team-high in carries (11) and yards (58).

"I expected us to run the ball better, so, obviously, the more carries you have, the more you can distribute that," Kelly said. "So, again, and you get behind and it turns into a little bit more of a throwing game. That's what kind of happens in those games."

At no point was Murray's absence more notable than a key fourth and one late in the first half. With the Eagles driving, and facing a short fourth down attempt inside the Cardinals' 10-yard line, Kelly opted to go with Mathews. He came up short, and the Eagles went into halftime down seven points rather than three, or possibly tied.

"We had Ryan [Mathews] in there who is a 230-pound back," Kelly said of that particular personnel decision. "We thought we were going to get it on fourth and one, the ball got bounced outside to the DB's and that's kind of the game. We don't get it there.

"You can look back at that -- kind of in hindsight -- but I thought in terms of making the call that we were going to get it. It was fourth and one and we think we can pound it up in there. We've got two tight ends in the game, brought a receiver over to handle the DB and then pound it up in there and see if we can get the first down."

Unfortunately, the didn't. And, interestingly enough, the numbers suggest that not only have they used Murray more often in those spots, but also that he's been more successful. Much more successful.

During the fourth quarter, Murray could be seen sitting on the bench in a winter hat rather than his helmet. After the game, he offered a more simple explanation than perhaps some were expecting.

As for his lack of touches against the Cardinals, despite his recent tête–à–tête with owner Jeffrey Lurie, Murray said his playing time is not all that different from the weather that forced him to bundle up as the night grew colder -- it's out of his control.

"I want to play, "Murray said. "This is what I signed up for. I’ll be here ... I signed up to be here for an opportunity to make the playoffs.

"Whenever I get an opportunity I just got to make the best of it," he added. "I’m not calling the plays. Things [that are] out of my control, I can’t worry about it."  [via Bleeding Green Nation]

Murray is correct in that he doesn't call the plays. But if he was performing better when his number was called, perhaps he would see an increase in carries.

After the loss, several of his teammates were asked about the running back's lack of carries, and the reactions were mixed.

Quarterback Sam Bradford, who out-rushed his college roommate by a yard in the loss to Arizona, was somewhat surprised to find out after the game that he only handed Murray the ball twice.

“To be honest, I’m not even sure how many times he carried the ball," Bradford said before a member of the media told him it was just twice. "Two? Yeah, I mean guess that is a little bit surprising but we have been rotating our backs for the past couple weeks and I think that’s just kind of been the plan.”

As for tight end Zach Ertz, who caught a 22-yard touchdown in the first quarter, he offered the following assessment of the Eagles' running back rotation:

“I think everyone has 100 percent faith in Duce [Staley] to put those guys in situations to be successful. Ryan Mathews is a heck of a running back. We’ve seen all year what he can do and I think he deserved the bulk of the carries tonight. DeMarco [Murray] has been an unbelievable teammate throughout this year. His demeanor and approach hasn’t changed at all. I think that speaks volumes to the person he is.”

It would only be natural for Murray to be upset hasn't been more involved in the Eagles offense lately, especially when you consider that the 27-year-old carried the ball 392 times last season and was the focal point of a team that finished 12-4. After all, these guys are competitors -- and pride is certainly a factor.

As is the five-year, $40-million deal he signed in the offseason.

Whether or not that's enough to force the Eagles into keeping Murray around beyond this season remains to be seen. But remember this: Giving up on Murray would not only cost the team financially, but it would also be a gut-punch to Kelly's ego.

However, it's not as if the current situation is much better. Murray is one step away from being inactive, and if things keep going down this road, the third-year coach -- and first-year GM -- may not have a choice but to suck it up and admit he made a mistake.

Or, since none of the Eagles backs are running particularly well, he could work on improving the offensive line. But that's a different story for a different day.