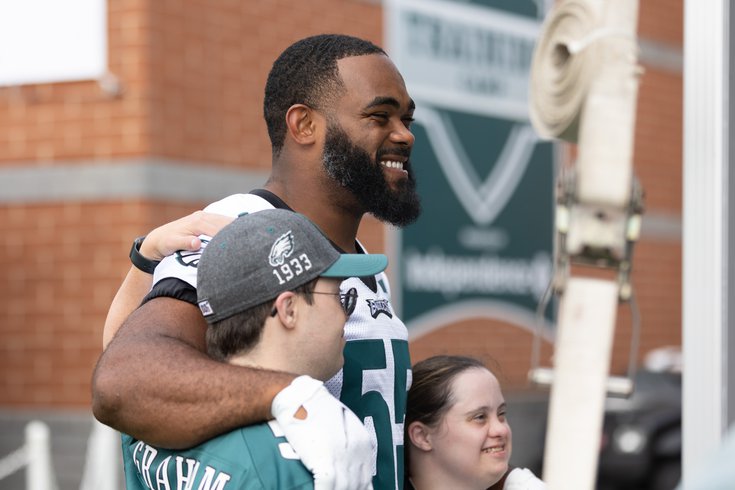 Eagles DE Brandon Graham poses for a photo with fans back at training camp in late July.

Brandon Graham makes his living on the football field, but now he's looking to help out on the ice and beyond.

Announced Monday, the longtime Eagles defensive end is joining the board of directors for Ed Snider Youth Hockey & Education, a foundation built to educate and empower the Philadelphia area's underserved youth through the game of ice hockey.

"One of best parts about being an athlete is the ability to use my voice to help make a difference, especially when it comes to helping underserved youth in my community," Graham said in a statement released by Snider Hockey. "I'm so excited to be joining the board of Snider Hockey & Education and help them continue to bring positive change to so many in Philly. I want to do my part in helping student-athletes succeed in the game of life!”

Founded in 2005 by the late Flyers owner, Ed Snider, the foundation offers a wealth of learn-to-play hockey programs and after-school education that have introduced a countless number of kids to the sport and have given them the tools to succeed throughout life.

Graham, in his 13th season with the Eagles, has been a fixture and fan-favorite within Philly sports for well over a decade thanks to his positive and easygoing nature. He always has a smile on his face, even when he's chasing down opposing quarterbacks.

Snider Hockey's board of directors also include former Flyers Danny Briere and Kimmo Timonen, along with an emeritus spot for Wayne Simmonds, who is currently with the Toronto Maple Leafs.

And though the foundation's ties are to a different sport and team, Graham's and Snider Hockey's values do line up well, and can only be a good thing for the city.

Very cool to see that Brandon Graham has been named to the ⁦@SniderHockey⁩ board of directors. Graham is truly a citizen of this town and Snider Youth Hockey is a terrific program teaching sport & values. This is a great match. pic.twitter.com/p2O61AvJ1v