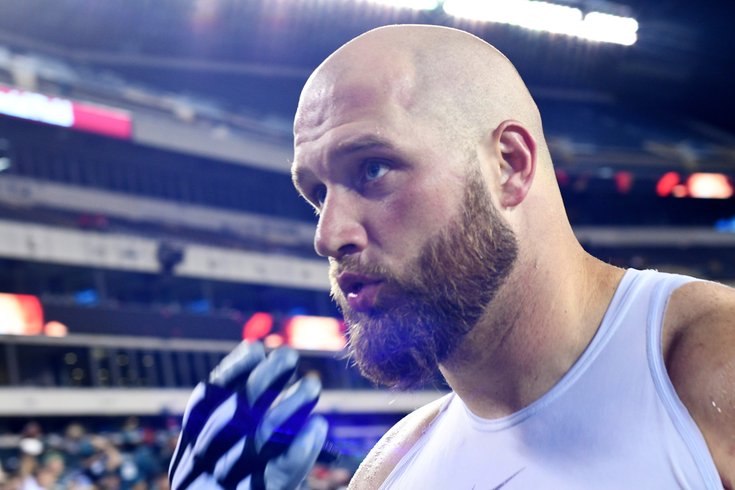 The Eagles dispensed some less-than-stellar injury news on Saturday morning, with reports that starting right tackle Lane Johnson and backup (second starting?) tight end Dallas Goedert will each miss the remainder of the NFL preseason with lower-body injuries. Both Johnson (knee) and Goedert (calf) are considered week-to-week.

Obviously, the bigger concern here is Johnson, who is arguably the Eagles' best offensive lineman on a unit that also features a future Hall of Famer at left tackle, an All-Pro at center and a Pro Bowler at right guard. And, of course, the health of that group might be second in importance only to that of starting quarterback Carson Wentz. After all, they're the guys tasked with keeping Wentz upright on Sundays.

Already without his partner in crime on the right side of the line, Brandon Brooks, who is recovering from a torn Achilles' tendon, the Eagles need Johnson to return before the start of the regular season. The good news is, according to head coach Doug Pederson, the team expects Johnson to be ready when the team hosts Washington on September 8 at the Linc.

"The anticipation is there — yeah, I would expect him [to be ready]," Pederson said following Saturday's practice. "If I know Lane, he's not going to want to miss that game."

In the meantime, that could mean Halapoulivaati Vaitai moves back to tackle after spending this offseason cross-training and learning to play guard as well. But if the team elects to leave Big V at guard to get a better assessment of how he's learning that position, we could see more Matt Pryor at right tackle this preseason.

"We know Big V has play tackle, we know he can play guard now. We definitely wanted to see him at guard the other night," Pederson said. "The other one is [Matt] Pryor. Pryor is another guy that we can move inside and outside — he played tackle the other night too — so we've got some versatility there. And we're going to continue to watch that and try to get him some [reps].

"I think one of the things that Stout [OL coach Jeff Stoutland] does is manages those guys and puts them in the position to coach them up and get them on tape so that we can have a little more versatility at that spot."

As for Goedert, who injured his calf during Thursday night's loss to the Titans, the expectation is also that he returns in time for the regular season. But because he's more of a luxury than anything else — the Eagles also have this Zach Ertz guy who is pretty good at tight end — if Goedert winds up missing a game or two it won't be the end of the world. In fact, Pederson even alluded to Goedert's absence allowing the team to get a better look at the other tight ends further down the depth chart, so he doesn't seem overly concerned.

Of course, none of that is meant to diminish how good of a player Goedert is.

The 2018 second-round pick has huge breakout potential in his second season with the Eagles, and with the offense being so enamored with two tight end sets, he's likely to see quite a bit of the field this season. He's looked good in practice, he's looked good in games, and he definitely has a role to play on this team. So while it doesn't seem like a serious injury, it's certainly one worth monitoring.

And, at least so far, it seems like there's not a huge cause for concern...

The Lane Johnson and Dallas Goedert injuries, to my understanding aren’t serious. #Eagles just shutting down until the season opener. https://t.co/4vaWFUILWN

Johnson and Goedert both expected to be fine for regular season opener but don't expect to see either one the rest of the preseason.