Week 4 NFL picks: Rounding up the experts' predictions for Eagles vs. Jaguars 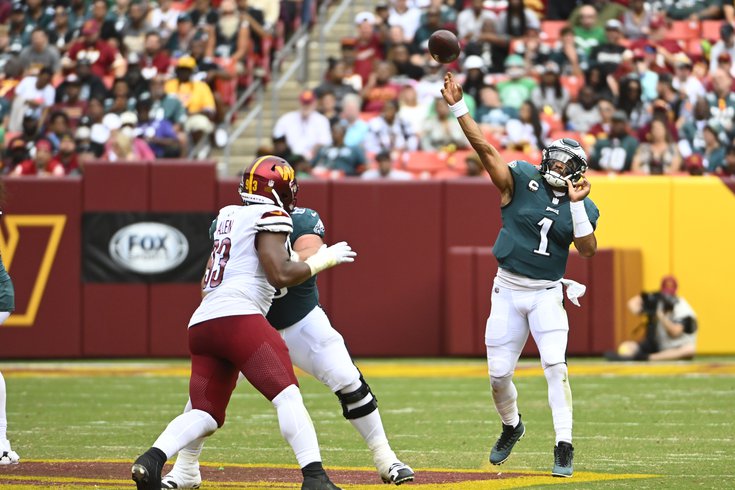 Can Jalen Hurts keep airing it out against Jacksonville?

The Eagles are 3-0 looking for 4-0 when their former Super Bowl-winning coach Doug Pederson returns to town with the Jacksonville Jaguars.

The Birds are firing on all cylinders. The defense has been fierce, the offense is scoring at will, and Jalen Hurts is starting to hear those "MVP" chants.

But the Jaguars don't look to be any slouch either.

They blew out the Colts and then the Chargers in back-to-back weeks, already coming a long way from the Urban Meyer-led disaster they were this time last year.

Both teams have momentum going in their favor in what might be the 2022 Eagles' toughest matchup yet.

Who will keep it going after Sunday?

I think picking the Eagles to score exactly 24 points is a smart strategy after they scored exactly that in their last two games. I also think that while the Eagles are better than the Jags and should come away with the win, the current 6.5-point spread is discrediting Jacksonville a bit too much. They have had two pretty impressive wins and they have an offense that can move the football. I think they'll cover the spread, and maybe score a garbage touchdown late after the Eagles get ahead early with one of their patented fast starts. [PhillyVoice]

Now on to other expert predictions...

• Inquirer.com: Two of three Inquirer beats have the Eagles besting the Jags. Jacksonville got better, but as Jeff McLane writes, maybe not enough to keep the Eagles under control through the air.

The Jaguars defense has strung together impressive back-to-back outings, shutting out Matt Ryan and the Colts, and holding the injured Justin Herbert and the Chargers to just 13 points. Edge rusher Josh Allen has been a tough block for tackles and, because he rushes evenly from either side, should be a handful for Jordan Mailata and Lane Johnson. Inside linebacker Devin Lloyd has been a rookie revelation and has commandeered Jacksonville’s stout run defense. The Jags have allowed just 55 rushing yards a game.

The Eagles have some notable advantages through the air, though, and this should be where the game will tilt in their favor. Slot cornerback Darious Williams has been exploitable. Look for Quez Watkins or Zach Pascal, who has a considerable size advantage, to be targeted early. Outside cornerback Tyson Campbell has been steady, but Jacksonville has some injury uncertainty on the other side, and their safeties can be suspect. Expect Eagles receivers A.J. Brown or DeVonta Smith — or maybe both — to have banner days again.

• The Athletic: Vic Tafur doesn't think anyone is stopping Jalen Hurts right now. Predicting the result with the 6.5-point spread in mind though? The Eagles may come out on top, but he likes Jacksonville to cover.

The Jaguars are good at stopping the run, but nobody is stopping Jalen Hurts this season. He is relentless and has 916 yards passing, 167 yards rushing and seven touchdowns, and one can only imagine what his numbers would be if the Eagles didn’t get out to huge leads every week and hit cruise control. The Jaguars’ defense, meanwhile, still gives up too many big plays. Jacksonville opponents have averaged 8.38 yards to go on third down — most in the NFL — yet somehow its defense ranks 21st in third-down conversion rate (42.4 percent).

There might be some line value here, as the Jaguars are coming off a big win on the road against a hobbled Chargers team that kept losing bodies as the game went on. Trevor Lawrence is much improved this season, but I think Doug Pederson will have some tricks up his sleeve for his former team. I like the backdoor cover.

• Gregg Rosenthal, NFL.com: A close one, but one Rosenthal sees the Eagles still coming out of undefeated, 27-23.

The top four teams in DVOA play each other this week. Bills-Ravens makes sense in this context. Jags-Eagles is a surprise. Jacksonville's defense is getting superlative play at every level with Josh Allen wrecking shop up front, Devin Lloyd becoming a Defensive Rookie of the Year candidate and Tyson Campbell evolving into a CB1. Sunday marks a bigger challenge, where the perfectly called and executed defense still sometimes won't be enough. Philadelphia has more firepower, but Jacksonville should keep it close. [NFL.com]

• Pete Prisco, CBS Sports: Again, a close one and maybe the best game of the weekend, but one that has Hurts and the Birds walking away 4-0 after a 28-24 score.

This is one of the best games of the weekend. Who could have imagined? Watching the Eagles offense against the Jaguars defense will be a treat. Can the Jaguars contain Jalen Hurts? It won't be easy. That's why I think the Eagles will find a way, but it's close. [CBS Sports]

MDS’s take: It’s hard to believe these are two of the best teams in the NFL, but that’s what they look like through three games. The Eagles will move to 4-0, but the Jaguars will give them a tough fight.

• USA TODAY Sports: And it carries over to USA Today's panel of seven writers. They like the Eagles, but no one has them winning by any more than 10.

• Sheil Kapadia, The Ringer: The Eagles could easily come out and just steamroll their opponent like they have the past couple of weeks, but there's something about these Jaguars. Kapadia senses a close one too, with Jacksonville at least covering the spread.

The battle between the Jaguars’ defensive line and the Eagles’ offensive line will be fun to watch. It’s possible that the Eagles are just really, really good and are going to continue to steamroll their opponents. But I really like what I’ve seen from this Jaguars team. This feels like a close game.

Who knew Jalen Hurts vs. Trevor Lawrence would be one of the best QB matchups of this season? It's a reunion game for Doug Pederson, and the Jaguars have blown out AFC preseason contenders in back-to-back weeks. We're going to stick with the Eagles in one of the more exciting games of Week 4.

Doug Pederson will try to fare better in his revenge game vs. Philadelphia than Carson Wentz did. Pederson has his offense looking complete with Trevor Lawrence, Christian Kirk, James Robinson and others. This is a good defensive challenge for the Jaguars but they will have some success moving the ball with a dynamic and diverse attack. The Jaguars' defense is seeing some young players stand out early, but there are still enough issues to struggle on the road with the Eagles' balance and explosiveness led by a red-hot Jalen Hurts.

Pick: Eagles win 34-27 and cover the spread. [The Sporting News]