Which Eagles can make the Pro Bowl this season? 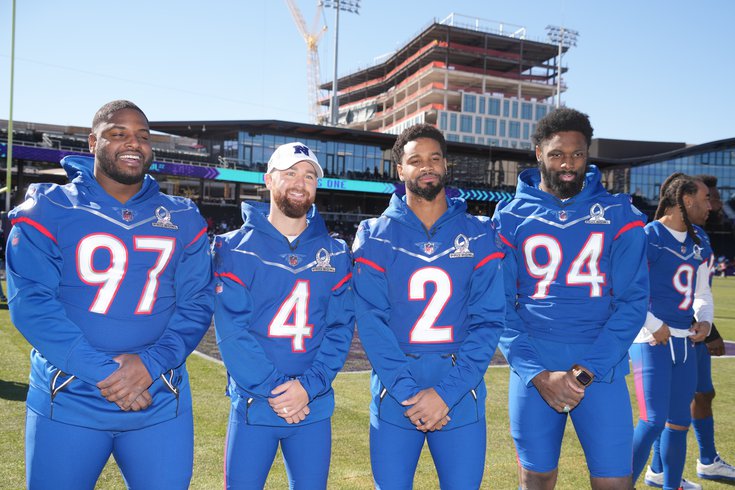 After a 2021 season in which the Eagles had a surprise playoff berth, the Eagles had five players named to the Pro Bowl: Jason Kelce, Darius Slay, Javon Hargrave, Jake Elliott and Josh Sweat. Kelce and Slay were original Pro Bowl selections named in December. Hargrave, Elliott and Sweat later made the roster as alternate choices who got the bump up.

It feels like more and more players get added to the Pro Bowl roster every season because tons of guys don't make the trip because of injuries/rest. That could bode well for a talented Birds squad. Which Eagles have a shot to represent the NFC in the 2023 Pro Bowl? Here's a position-by-position breakdown:

Jalen Hurts: Hurts was an alternate for the 2022 Pro Bowl, but ultimately didn't get selected to the roster. Officially, that doesn't count as a Pro Bowl season for the Birds' QB1. I wouldn't expect Hurts to be named during the first wave of Pro Bowlers this winter, but with a team that could win 10-plus games and marginal improvements because of a deeper cast of skill position players, there are some factors that could lead to Hurts making the squad.

Hey, Mitchell Trubisky once made the Pro Bowl in the NFC. Hurts can do the same if his passing efficiency takes a jump, his rushing numbers remain strong and the Eagles win the division.

Miles Sanders: Sanders was selected to a Pro Bowl following the 2020 season because of a "Madden NFL 21" fan challenge event, but that also doesn't count as an official Pro Bowl nod. While Sanders is the Eagles' RB1, he's in a crowded backfield with two other good players in Boston Scott and Kenny Gainwell. If Hurts keeps racking up rushing touchdowns in the red zone, Sanders' raw numbers won't be enough to garner a selection.

A.J. Brown: Brown made the Pro Bowl in 2020 with the Titans after posting a 70-1075-11 stat line on the season. That came on a Tennessee team that had the second-most rushing attempts in the NFL. Brown has showcased that he can put up numbers despite being in an offense that emphasizes the running game. The Eagles will throw more in 2022 than they did in 2021 with a run-heavy attack, but the run game will remain a factor. I don't think he'll hit double-digit touchdowns, but with a 1,000-plus yard season, he could make his second Pro Bowl team.

DeVonta Smith: Smith undeniably has the talent of a Pro Bowl player, but it's a numbers game where Brown will take some of his target share and, once again, the Eagles still run the ball a lot. Smith had 912 receiving yards as a rookie last season. I'm not bullish on him hitting that 1,000-yard mark. It's so hard to have two dudes do that. The Eagles have never had a season in franchise history where two players both topped 1,000 yards (via Stathead). The closest that's come to happening in recent history is 2010 when DeSean Jackson had 1,056 yards and Jeremy Maclin had 964.

Dallas Goedert: Like Smith, Goedert is a Pro Bowl talent, but I don't know if the raw numbers will be there. Playing in the same conference as George Kittle and Kyle Pitts, who I imagine will both get more targets than him, hurts. Goedert was an alternate this past season, so maybe he sneaks his way on the roster this year as an injury/rest replacement.

Jordan Mailata: Mailata will be in consideration for an All-Pro team in 2022. He'll certainly be in the mix for the Pro Bowl.

Landon Dickerson: Maybe it's a bit too early for Dickerson, though he has Pro Bowl potential. What works against his case is that he's only the Birds' fourth-best lineman. Hard to send a million guys from the same spot on the same team, right?

Jason Kelce: Kelce made his fifth Pro Bowl team last season. Assuming a healthy season for the Eagles legend, he'll get his sixth nod this year.

Isaac Seumalo: Seumalo is a solid starter and if he's the fifth-best o-lineman on your team, you're in a great spot. I can't imagine he's in line for a Pro Bowl selection though.

Lane Johnson: Johnson made three-straight Pro Bowls from 2017-2019 as the best right tackle in the game. He was Second-Team All-Pro guy in 2021 despite not making the Pro Bowl. I expect a return to the Pro Bowl roster for him this season.

Haason Reddick: Reddick had had double-digit sacks in each of the last two seasons. There's been some chatter about how much Reddick will rush the passer as opposed to dropping back as the Birds' SAM linebacker in Jonathan Gannon's defense. I've written that Reddick should almost exclusively be used as a pass rusher. If Gannon wisely does that, Reddick will be vying for 10-plus sacks yet again. Keeping a guy who's done that three years in a row off the Pro Bowl team just seems wrong.

Fletcher Cox: Cox is still a solid player, but no longer his All-Pro self. He doesn't put up the numbers in Gannon's system the way he did under former defensive coordinator Jim Schwartz's "Wide 9" front. Perhaps he can make it on the fan vote, but I doubt that.

Javon Hargrave: Hargrave made his first ever Pro Bowl team last season after recording a career-high 7.5 sacks at defensive tackle. That number was third among traditional defensive tackles in 2021, trailing only Aaron Donald and Jonathan Allen (via Stathead). The Birds' sack numbers were putrid last year, coming in 31st in the least with just 29 total. That number will take a jump in 2022 and I can see Hargave replicating those numbers even with the development of Jordan Davis and Milton Williams. His rep building from that first Pro Bowl nod definitely helps too.

Brandon Graham: Graham finally made his first Pro Bowl in 2020 during his age-32 season. BG has never had elite sack numbers, topping out with a career-high 9.5 sacks during the Eagles' Super Bowl campaign in 2017. His pressure numbers, however, are always strong and he can rack up tackles for loss as one of the best run-stopping defensive ends in football. Coming back from an Achilles tear will be difficult, but it's always hard to count out a player and person of Graham's caliber. If he comes back and gets eight sacks like he did on a poor Eagles team in 2020, I could see a scenario where he makes the squad as a promoted alternate.

Josh Sweat: It's wild that the Eagles had two Pro Bowl defensive linemen in 2021 between Hargrave and Sweat despite their underwhelming overall sack numbers. Sweat recorded 7.5 sacks last season before making his first Pro Bowl team. Like I said about Hargrave, a player's reputation building after their first Pro Bowl nod bodes well for the future chances of making the roster. Given how strong this unit is, there could be more than just two Eagles pass rushers who merit Pro Bowl consideration.

Jordan Davis: Davis won't have enough playing time to put up big numbers and he isn't a pure pass rusher, but he should be pretty exciting for Birds fans to watch as a rookie.

T.J. Edwards: Edwards has had a strong training camp, but I don't think he's a Pro Bowler. Good player, but not everyone can make the Pro Bowl!

Kyzir White: Basically the same line of thinking for White as I had for Edwards.

Darius Slay: Slay made his fourth Pro Bowl and first as an Eagle in 2021. He looked the part of an All-Pro in his second season in midnight green. I'm predicting him to make his fifth squad this winter.

James Bradberry: Bradberry has looked excellent in training camp with sticky coverage on the likes of Brown and Smith. Much like the glut of talent offensive linemen for the Eagles, it's hard to send multiple corners to the Pro Bowl, though Bradberry did make the team in 2020 as a Giant. I don't expect him to be making it, but I am expecting a great season for him in Philly.

Marcus Epps: Epps could be a solid contributor in his age-26 season, but he's not a Pro Bowler.

Anthony Harris: Harris is a good vet presence who has a strong familiarity with Gannon's defense, but he's not a Pro Bowl guy.

Jake Elliott: Elliott already has one Pro Bowl trip to his name. He has the big-name recognition too because of his clutch kicks in the 2017 season. He can back there again even if it comes as an alternate.

Arryn Siposs: I could not imagine Eagles beat writer Jimmy Kempski's reaction if Siposs made a Pro Bowl.

Rick Lovato: Lovato made the Pro Bowl in 2019. For the random special teams spots, being on a really good team is a huge factor. If the Birds are good and Elliott makes 90 percent of his field goals again, why not Lovato?

Shaun Bradley: Bradley was a Pro Bowl alternate as a "special teamer" last season. He had a couple huge plays, including a game-changing punt block in Carolina in Week 5. He's in the cards!

Britain Covey: Covey likely won't make the Eagles roster, but he's an excellent returner. If he somehow made the team with strong performances in joint practices and the preseason, it only takes one or two big returns for him to get some juice going around the league.

It's a Friday in August and I'm feeling optimistic. I'll say the Eagles have seven Pro Bowlers this season. Brown, Mailata, Kelce and Johnson on offense and then Sweat, Reddick and Slay on defense. It sounds like a lot, but the Eagles had five last year and are way better in 2022. Do too many players make the Pro Bowl? Maybe! It makes the Birds look good though.