State of the Batcave: Jason Kelce and the Eagles' O-Line join the fray

"Listen, if we score on a screen, I'm getting that cape and I'm being Fat Batman," Kelce told his brother Travis on their "New Heights" podcast 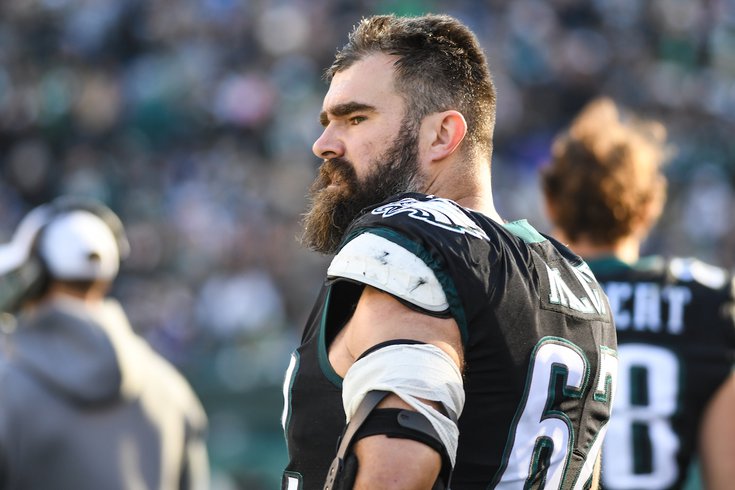 Jason Kelce also wants to be a Batman.

The Eagles' Bat-Family is getting bigger.

After A.J. Brown (Swole Batman) and Devonta Smith (Skinny Batman) each wore the cape for the first time following their touchdowns in last Sunday's 24-8 thrashing of Washington, the celebration went viral and caught tons of eyes, including those of one of the guys right next to them.

"Listen, if we score on a screen, I'm getting that cape and I'm being Fat Batman," the veteran center told his brother and Kansas City Chiefs star Travis Kelce this week on their "New Heights" podcast. "I promise you that, that is gonna happen. The next screen we score on, Fat Batman is gonna be on the sideline."

Add Lane Johnson and the rest of the offensive line to the internal roster of Batmans too, though cornerback Darius Slay said the designation needs some fixing.

"I told him he's not the Fat Batman because honestly...I'm first sexiest on the team...he's the second sexiest, then Lane's the third sexiest," Slay told the media on Thursday. "But I'm first for sure, but Lane...I told him y'all are Sexy Batman, so when y'all put the cape on y'all gonna be the sexiest Batman in the world!

"You know Lane..LANE, HE GOT A SIX-PACK. C'mon like...we got sexy guys over there. We're gonna call them the Sexy Batman, they're Sexy Batman."

Jason Kelce wants to be Batman 🦇

“I told them all, ‘You’re Sexy Batman. When you put the cape on, you’re gonna be the sexiest Batman in the world’” 😂

A certain magazine from a few years ago backs him up on that.

There's precedent for one of the linemen to score too.

Last season against the Giants, the Eagles ran a play-action call that left Lane Johnson wide open at the goal line as an eligible receiver. The Giants bit and Johnson was free to haul in the first touchdown reception of his career.

So a tour up the sideline with the Batcape is definitely in play for the o-line, but you know, in pads, fully dressed.

Heading into the Week 2 home opener against Minnesota – which became a 24-7 rout of the Vikings –  Slay called Brown the "Swole Batman" and applied the tag to the team's other two top receivers in Smith and Quez Watkins.

"You know y'all see him with the dark visor, SWOLE. You know he just looks like a swole Batman," Slay said. "Y'all cannot tell me he doesn't look like a swole Batman! DeVonta (Smith) is a skinny Batman, Quez (Watkins) is a fast Batman, so we got three Batmans on the team. But we got one swole, one skinny, one fast!"

They leaned fully into it, and in the last two weeks, all three have had massive impacts on the field.

Just remember: No Robins. All Batmans.