What they're saying: Eagles have money to spend, but may be facing a power struggle 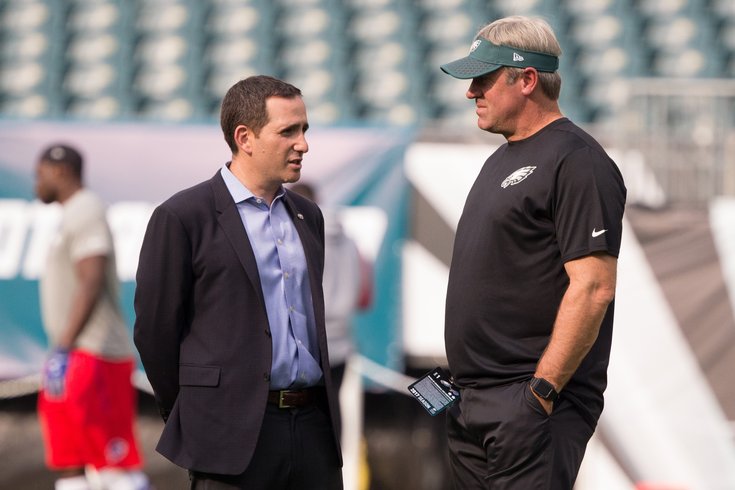 The season may have ended last Sunday, but it's been quite the interesting week for the Philadelphia Eagles, who parted ways with offensive coordinator Mike Groh and receivers coach Carson Walch just a day after head coach Doug Pederson gave a ringing endorsement of his two embattled assistants.

In the days since, Pederson has claimed that the decision was his own, despite reports that owner Jeffrey Lurie actually made the call to fire Groh and Walch. And that's brought into question the stability down at the NovaCare Complex. Did Pederson make those positive remarks as a last-ditch effort to save the duo and undermine his owner? Was it simply the latest example of Pederson always having his guys' backs? Or was something else at play?

Needless to say, with a busy offseason likely ahead for the Birds — with plenty of areas in need of improvement, including a desire to get younger — now is not the best time for a power struggle atop the organization. So, what are we to make of what went down in Eagles Land this week? And how might it impact the team heading into free agency and the draft? Let's take a look at what they're saying about the Birds...

Who is calling the shots?

Let's start with that question of a possible power struggle atop the Eagles organization. According to David Murphy over at Inquirer.com, the reason behind this potential riff could be in fact due to a power void, in which no one voice is ultimately guiding the Eagles through the big-picture decisions they have to make.

While that's a scary thought — and filling that void is also potentially scary because you need to make sure you have the right voice making those kinds of decisions — it also may explain the awful messaging this week out of NovaCare.

The farther we get from the Super Bowl run, the more reason there is to wonder whether the interplay between Pederson and his de facto general manager includes the necessary symbiosis. There was reason to wonder about the dynamic when the Eagles traded for Golden Tate without an apparent plan to play him. Same goes for the maneuvering we saw this season at the wide-receiver position.

The Eagles have created a chain of command that can often incubate the sort of fiefdoms that are antithetical to a coherent vision. Pederson is in charge of the offense and wins and losses. Jim Schwartz is in charge of the defense, Roseman the players. All are dependent upon one another, but when dealing with the laws of scarcity that dictate roster construction, who is the one who ultimately decides what is best for the group as a whole?

“We have a lot of voices who are not afraid to air their opinion,” Roseman said Thursday, "and I think that we always want that and obviously we have the coaching staff, too, who gives us their opinions, as well.”

But the question remains: Which of these voices is ultimately responsible for articulating the big picture? Once again, we’re left to wonder: Do the Eagles have one?  [inquirer.com]

The real seat of power

Over at the other Inquirer.com property, The Philadelphia Inquirer, columnist Mike Sielski says there is a guiding voice behind the Eagles, and it belongs to owner Jeffrey Lurie. And if he is the one that indeed made the call to fire Groh and Walch, despite Pederson's claims otherwise, that's just fine.

There's nothing wrong with Lurie laying down the law after Pederson's positive press conference remarks if that's what he thinks is best for his team. After all, it is his team.

As Sielski points out, we've seen examples like this play out in the past, with an owner telling his coach what's what — like, for example, when Robert Kraft told Bill Belichick that Tom Brady would remain the quarterback rather than switching to the younger Jimmy Garoppolo, who would soon be traded despite an impressive showing in relief of Brady. Owners tend to stand by their guys.

And there's no question who Jeffery Lurie's guy is...

Perhaps, in our collective fixation on press conferences and “optics” and the words that our most prominent athletes, coaches, and executives use, in our analysis of what Pederson said Wednesday and why he said it and what he meant when he said it, we’ve forgotten a basic truth: Pro sports owners are the ones who wield the real power in these situations, and this sort of thing is what pro sports owners do.

These franchises are the places where rich men’s loyalties and preferences and favors and favoritisms play themselves out. The results are myriad — benefits and drawbacks and things in between. One might be a multimillion-dollar fund-raiser for autism research. Another might be Vera Wang-designed cheerleading ensembles. Another might be a competitive football team. But the results come with the usually implicit understanding that this is Mr. Owner’s Team and Mr. Owner’s Show. In this case, the result was more explicit than most. Lurie did what owners all around the NFL, Major League Baseball, the NBA, and the NHL do. He stuck by his guy.

Kraft has had Brady. Jerry Jones had Jason Garrett. Ed Snider had Bob Clarke. Lurie has Howie Roseman. They’re that close, and for Lurie, the choice between believing that Roseman had erred in counting on Alshon Jeffery, DeSean Jackson, Nelson Agholor, and Mack Hollins and believing that those receivers just needed to be coached up more was no choice at all. And if you want to argue that Lurie isn’t prone to this sort of meddling, let’s remember who came up with the cutting-edge front-office alignment under which the Eagles operated in 2015, just five years ago. There was Chip Kelly, ostensibly in control of everything while undergoing Lurie’s yearlong assessment of his, Kelly’s, administrative and coaching skills. There was Roseman, out as the team’s player-personnel czar but still in the building, in a smaller office down the hall, biding his time. Smartly, as it turned out.  [inquirer.com]

For whatever reason, for better or worse, Lurie seems to be heavily invested in the success of his general manager, even if that means making his head coach look bad in the process. While that might've flown in Pederson's first two seasons here, he's proven to be a winning NFL coach who now has a Super Bowl ring. Eventually, he may say enough's enough.

And that's the fine line the Birds are now walking.

This power-struggle stuff would be important in any offseason, but it may be even more crucial this time around as the Eagles are set to have twice as many draft picks as they've had each of the last two seasons and have more money to spend in free agency than any other season under Roseman's leadership. On top of that, they have big decisions to make about several free agents that could free up even more cap space, as well as figuring out what to do with guys like Malcolm Jenkins, who is currently unhappy with his contract.

Over at 94 WIP, Eliot Shorr-Parks took a deeper look at how much money the Eagles currently have, as well as how much they could free up by getting creative with the roster and making some bigger changes than just what's expected...

Since Howie Roseman became general manager of the team, they have never had a financial situation like the one they are currently in. They are projected to have a ton of cap space. They have a ton of big-money veterans on the books. They both have the ability to make some major changes while also being locked in to almost all of their high-priced players.

Watching how Roseman, who has stressed the need for change on the roster, handles it is going to be fascinating.

According to Over the Cap, the top salary cap experts out there, the Eagles are projected to have a whopping $46.9 million in cap space this offseason. That number is easily the highest it has been in years and perhaps the most cap space Howie Roseman has ever had to work with.

That number could get even higher depending on what Roseman decides to do with four key players.  [94wip.radio.com]

Speaking of free agents, Eagles fans can do a little window shopping this weekend with four divisional-round games on tap. Several players on the with remaining teams will be free agents at the end of the postseason, and some could even be of interest to the Birds — what, with all that money they're going to have.

Mike Kaye of NJ.com took a look at nine players Eagles fans should keep an eye on this weekend, including a pair of wide receivers that we'll include below because, you know, they could really use help there.

Sharpe, a Newark native, could look to play closer to home next season. While he’s not known as a deep-threat weapon, he does have the ability to stretch the field. The 6-foot-2, 194-pound receiver could be a low-cost option for the slot receiver position. He had 25 catches for 329 receiving yards and four touchdowns during the regular season.

Robinson would be a low-cost option for the No. 2 wide receiver role. He would complement DeSean Jackson as another deep-speed threat. The former fourth-round pick caught 32 passes for 449 receiving yards and four touchdowns this season. He has the legitimate breakaway speed that the Eagles have been missing.  [nj.com]

Orlando Scandrick, who tried making a name for himself on TV by ripping the Eagles after he was released, made thousands of dollars on the backs of those same former teammates he bad-mouthed. Scandrick was gone before the Birds turned their season around with a late playoff push, but because he was on the team at all, he got a share of the bonus money Eagles players received for making the playoffs.

The despised former Cowboy, briefly an Eagle before spouting a bunch of nonsense about his former team on national TV, is among several Eagles castoffs who received a half playoff share because the Eagles reached the playoffs.

According to the NFL’s Collective Bargaining Agreement, players who spent at least three weeks on a team’s roster are entitled to a half playoff share if that team reaches the postseason and they’re not currently under contract to another team in the same conference.

Playoff shares for division winners in 2019 were $31,000, so guys like Scandrick, L.J. Fort, Zach Brown and Jay Ajayi each received checks for $15,500 on top of what they stole … I mean earned from the Eagles while they were here.  [nbcsports.com]