What they're saying: Replacing Dillard, high praise (and expectations) for young Eagles WRs

Plus, Yannick Ngakoue is somehow still being linked to the Birds 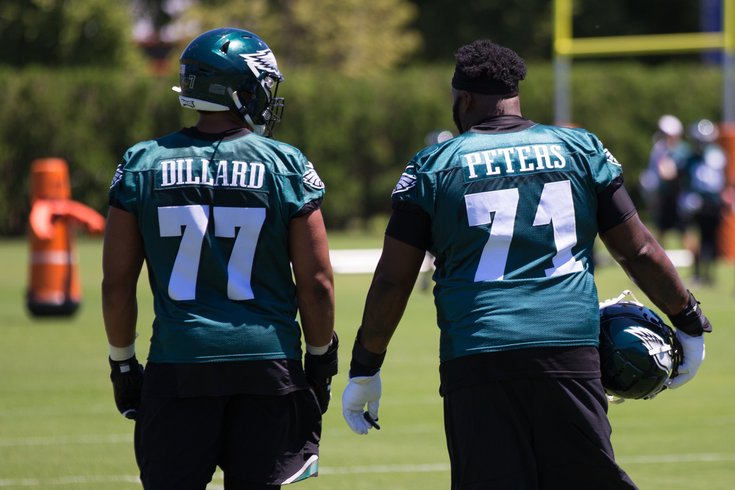 The start of the NFL season is rapidly approaching — as is the end of the practices open to the media, meaning the flow of information coming out of the NovaCare Complex is about to slow to a drip.

There will still be two more weeks worth of practice before the start of the season for Doug Pederson and Co. to prepare. They'll have even less time to make cuts, as rosters need to be down to 53 players by September 5.

But with just one NFL player currently on the Reserve/COVID list, it seems like the NFL season is going to start on time — and that's a good thing, assuming players, coaches, support staff (and their families) can all stay healthy and virus-free.

The Eagles, who are sixth in the NFL in projected win total according to TheLines.com's consensus odds, could have a few moves left up their sleeves before their season opener, especially given the season-ending injury to Andre Dillard in Thursday's practice. That's where we'll start today's edition of What They're Saying about the Birds...

Andre Dillard wasn't looking that great before he got hurt — and Jason Peters might have ended up replacing him at some point this season anyway — but now, the Eagles are going to have to figure out how they re-shuffle their offensive line with Dillard being out for the season.

They could move Peters back to left tackle from right guard, where he was going to replace injured Brandon Brooks, or they could opt to bring in someone from the outside to plug in for Dillard and leave Peters in his new position. If they opt for the latter, Brandon Gowton of Bleeding Green Nation took a look at a handful of options for the Birds.

Here's a look at one that BLG thought made sense back in the spring, long before the the Brooks injury, the Peters signing, and the Dillard injury. It's also one he believes still makes sense...

First mentioned Waddle as a potential Eagles free agent target back in March. What I wrote at the time:

Waddle has tackle/guard versatility and 31 starts in 61 games played. Eight of those starts came as an undrafted rookie on Jim Schwartz’s Lions in 2013.

The Lions traded Waddle to the New England Patriots and he served as a valuable swing tackle for them as they won two Super Bowl title while he was on the team. Safe to say they couldn’t have done it without him.

Waddle was lining up as the Buffalo Bills’ second team left tackle during 2019 offseason practices before suffering a season-ending quad injury last August. One would think he’s healthy by now.

Waddle only turned 29 in June so he should have plenty of tread left on the tires. He looks like a good swing tackle option to me.  [bleedinggreennation.com]

The hype surrounding the Eagles young wideouts has been aplenty so far this summer. And people are expecting big things from first-round pick Jalen Reagor, who, by all accounts, has looked ready to step right into a starting role in Pederson's offense.

But CBS Sports' Jeff Kerr is taking it one step further. On Friday, he published a list of three bold predictions for the 2020 Eagles, and he has the TCU product doing something no other WR in franchise history has ever been able to accomplish...

In the 87-year history of the Eagles, no player has ever surpassed 1,000 receiving yards in their rookie campaign. Reagor is going to be the first. ...

Ironically, the Eagles have Jackson [who had a franchise record 912 receiving yards as a rookie] starting at one of the wide receiver spots, but there's a vacancy at the other one. Alshon Jeffery is on the PUP list and it's unclear when the veteran will return, leaving Reagor to compete with Greg Ward and J.J. Arcega-Whiteside for playing time. The Eagles will have Ward strictly in the slot while moving Reagor interchangeably between the slot and outside. Reagor will win the starting wide receiver job and get a strong target share from Week 1 onward.

An impressive camp from Reagor will translate into regular season success (just like Jackson had in 2008) as he becomes another deep-ball threat for Carson Wentz. Reagor's elusiveness after the catch and game-breaking speed will open up the offense throughout the season, as he'll have opportunities for big plays with Jackson, Zach Ertz, Dallas Goedert and Miles Sanders as the other playmakers in the offense. Speed is the name of the game, and Reagor clearly has that asset.

With Reagor lining up opposite Jackson, he'll surpass the 1,000-yard plateau and break Jackson's rookie record. The Eagles front office will make sure fans forget why they didn't trade up to get CeeDee Lamb in April.  [cbssports.com]

Over at Pro Football Focus, they're also quite high on Reagor. They also posted a "bold predictions" piece recently, this one solely focused on NFL rookies, and they think Reagor could be a potent deep threat opposite Jackson.

The Eagles haven't a real field-stretcher in a few years (a healthy one, at least). And this year, they could have two, if this prediction from Michael Renner comes to fruition.

Over the past two seasons at TCU, Reagor hauled in only 18 of his 51 deep targets. While that doesn’t sound impressive, flip on the tape of those 33 incompletions to see why he was drafted so high. Reagor has explosive game-breaking ability that went wholly untapped with the quarterback situation at TCU. After lining up exclusively at right wide receiver last season, Reagor has been running all over the formation early in camp. More creative usage plus far better quarterback play with Carson Wentz means some big things ahead for the rookie.  [pff.com]

Or maybe we should make that three legit deep threats? Renner's colleague Anthony Treash took a look at some NFL rookies who could surprise in 2020 and, you guessed it, another Eagles wideout appeared on the list. This time it was fifth-round speedster John Hightower. But he might be more than just a stretch-the-field kind of guy.

However, if recent reports out of Eagles training camp are anything to go by, former Boise State wideout John Hightower, the team's fifth-round selection from the 2020 draft, could very well be in the mix for a chunk of targets this year.

He's not going to win many contested balls downfield, but Hightower's sheer speed means that he can avoid those altogether on go-routes. He earned the 16th-best deep-receiving grade in college football over his final two years at Boise State while his nine deep touchdowns with at least a step of separation in that span tied for the second-most.

He's more than just a deep threat, too, as he's also a complete route-runner. It shouldn't come as a surprise to see him break away from Philly's defensive backs in camp. Philadelphia got great value for Hightower in a loaded receiving class, and he's a player who is capable of making some noise in Year 1.  [pff.com]

With this many guys able to stretch the field, Zach Ertz and Dallas Goedert could feast on underneath routes.

The rookie wideouts aren't the only ones getting love, as second-year receiver J.J Arcega-Whiteside has also been getting some love at camp. In his recent up-down article coming off the second week of camp, NBC Sports Philly's Dave Zangaro listed JJAW as one of his "ups" along with rookie running back Adrian Killins, who got a nickname from Pederson, a great sign for any roster hopeful.

For the second straight week, JJAW has been very impressive. Of course he’ll need to start doing this is games for many to believe in him, but you can’t take away what he’s done in training camp either. He’s been really good and very consistent. The best signs are his ability in the red zone and his confidence level.

J.J. Arcega-Whiteside was just asked about a touchdown catch from practice.

He responded, "You'll have to be more specific. I had two or three of those today."

Killins probably would have made this list anyway but then Doug Pederson broke out the “AK” nickname in a press conference and I was sold. You gotta do something right for the head coach to use a nickname. And that aside, Killins has been getting a ton of reps with the first team. They’ve been lining him up in the backfield, in the slot and out wide. He’s one of the smallest guys on the team but he is also one of the fastest. [nbcsports.com]

And, finally, a look at the latest on Jaguars defensive end Yannick Ngakoue, who we've covered plenty in this space this offseason.

According to Dan Graziano, he's really put the Jags in a tough spot and appears to have a ton of leverage, including over where he plays next.

Does Ngakoue have any say in where he goes?

Yes, he does. As mentioned earlier, he's not technically under contract with the Jaguars until he signs the tender, which means they can't trade him until he signs the tender. So if, hypothetically, the Jaguars worked out the terms of a trade with a team, and it was a team Ngakoue didn't want to play for, he could just refuse to sign the tender. This is another factor that damages the team's leverage, since it theoretically limits the number of suitors.  [espn.com]

And that's important, because we've already seen him show interest in the Eagles on a couple of different occasions. Given that, the Eagles will be tied to him right up until he's dealt, which is likely why the Graziano listed the Eagles among his most likely landing spots.

The Eagles might have to clear some cap space to make a move like this, and they're among the most cap-strapped teams in 2021 and beyond. But they also are a win-now team -- a defending division champion that has made the playoffs three years in a row, won the Super Bowl three years ago and is eager to show the world they can do it again.

Philadelphia has been in the mix as a potential Ngakoue suitor all offseason and still hasn't ruled out the possibility. But with the cap gymnastics it is going to have to go through in the next couple of years, a first-round pick might be too high a price for a player whom they might not be able to afford beyond 2020.  [espn.com]