Thumbs up/thumbs down: Experts weigh in on Eagles' decision to hire Nick Sirianni as coach 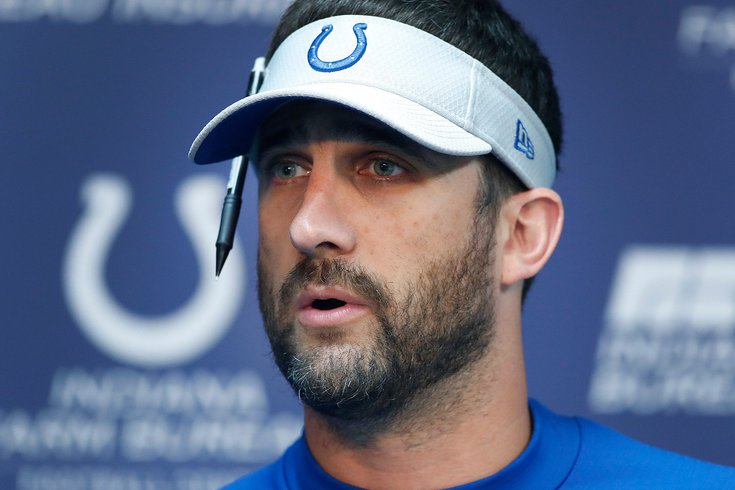 We've had some time to digest the news that the Eagles hired a 39-year-old offensive coordinator with no play-calling experience and little track record to be the next head coach of their football team.

Having slept on it, do you feel better or worse about the decision?

A lot will surely be written about the Eagles' unexpected decision over the next few days, with decisions about the rest of the coaching staff and eventually the players who will be on the 2021 team sure to be made in the coming days and weeks. But right now, a day later, we are still left scratching our heads.

Was this a good or bad hire?

Here's how some of the top Eagles writers and football thinkers answer that question:

The Eagles front office went a different direction than expected, and they're trying to be the "smartest guys in the room" Hayes says. And the columnist appears to talk himself into giving the hire the benefit of the doubt:

Wait a minute. Andy Reid had never called plays. Neither had Pederson. They both won Super Bowls. Maybe the play-calling thing is overrated. Maybe Lurie and Roseman know that.

Smartest guys in the room?

Head coach Joe Judge has near-universal approval among Giants fans, helped by his end-of-season rant decrying Pederson and the Eagles’ tanking methods. There are clear signs of progress. The defense, led by defensive coordinator Patrick Graham, looks promising. They should be able to add more playmakers at wide receiver (and elsewhere) through free agency and in the NFL Draft, where they’ll have the 11th pick.

The Eagles lack identity. The Giants are cultivating theirs in the image of Judge.

It’s going to be a while before the Eagles are relevant again.

The Giants aren’t even relevant just yet, though maybe that’ll change in 2021.

Either way, Nick Sirianni shouldn’t scare them. Neither should Wentz. Or, for that matter, Roseman.

The NFC East is there for the taking. Washington still needs a quarterback. The Cowboys need to fix their defense. Both are in better shape than the Eagles.  [NJ.com]

Fowler: C. Just seems like the Eagles telegraphed this one, firing Pederson for a coach who's an extension of the Pederson tree, trying to fix Wentz without doing it with Pederson. Sirianni is an ascending coach with good demeanor for the job, so maybe that will translate in Year 1. My guess is some other candidates weren't thrilled about this job.

Graziano: C-minus. I don't know. If he can get Wentz fixed, the hire is going to look really good. But if that's his primary responsibility, then how's he going to do with the gazillion other things a head coach has to handle. I've heard good things about Sirianni as a coach, but it feels a bit early for him to have a job like this.  [ESPN.com]

At least they like him in Indy, so that's a good sign. The article we link to below from the Indy Star is actually the most in-depth and interesting description of what Sirianni is like, and the impact he's had on the Colts. I highly recommend it. And not surprisingly, writer Jim Ayello is very high on the Eagles decision to make him their head coach:

As for what the Colts are losing in Sirianni as a coach, they're losing both a creative mind and one of the more well-organized and detail-oriented members of their staff. Sirianni helped craft the highly successful short-yardage package featuring backup quarterback Jacoby Brissett. During offseasons, Reich charged Sirianni with divvying up assignments for study: with different members of the staff exploring third downs situations, someone else on red zones, short yardage etc.

Dealing with players, Reich often referred to Sirianni, a former Division III wide receiver, as expert around receivers. When discussing the development of young pass-catchers such as Michael Pittman, Reich raved about the Sirianni's work with them. Rivers did, too.  [IndyStar.com]

A lot of Eagles fans and members of the local media are being much more critical of the front office than of their actual choice, and this entry is a prime example of that.

The Eagles have eroded faith we had in their process, but I’ll hold out hope on this front: Sirianni strikes me as a good coach, and one that will be more than just a Wentz fixer. The players’ ability (not the owner’s hopes and dreams) will decide this sooner than later. I’m a fan of Sirianni, and am willing to give him a chance to get the most out of what looks like a dire situation that may not be as ugly or predictable as it seems.  [Radio.com]

The aforementioned trio of NFL writers at The Athletic wrote down their first impressions about the hiring Thursday afternoon. They were not exactly beaming with excitement:

Sheil Kapadia: I don’t know? OK, don’t make that the headline. But Sirianni is one of the candidates I honestly don’t have a strong opinion about. This is not someone with a résumé you can point to and really say it feels like a home run or it feels like a disaster. I think it’s fine.

Bo Wulf: I know it would be naive to have a strong opinion one way or another about how Sirianni will work out as the Eagles’ head coach. I wasn’t in the room when he interviewed, and I’m not privy to his staffing plan or how he plans to build an offense. But my initial impression is that I’m underwhelmed.

Zach Berman: One would think the Eagles trusted the insight of Reich, who made Sirianni a priority hire in Indianapolis and gave him similar game-planning responsibilities to what Reich had in Philadelphia. (Of course, Reich also had the benefit of a career as an NFL quarterback, so this isn’t an apples-to-apples comparison.) One should hope there was more nuance to this hire than Sirianni receiving a strong recommendation from your former offensive coordinator. And perhaps Sirianni is the type of up-and-coming coach who would have been in demand in the future, and it’s better to be early on him than too late. He might even be what Wentz and the offense need and have the necessary personality and leadership qualities to be successful. Because this job requires far more than an offensive mind and a background with quarterbacks. But my first reaction is that the Eagles made that their top priority.   [TheAthletic.com]

Hunter Doyle | Inside the Iggles

The offensive possibilities are what excite the the writers over at the Eagles' FanSided Blog. Here's a small snippet as to why:

Of the remaining candidates, he was at the top of our list here at ITI. Getting this Eagles team back on track is a tall task and there’s a lot on Sirianni’s plate. Fans will love what he brings to the table in terms of offensive knowledge though.

This is a coach who was well respected by his players in Indianapolis and for good reason. He has a strong track record of coaching both quarterbacks and wide receivers. He puts his players in the best position possible to succeed.

When Sirianni was hired in 2018, he did an exclusive interview with Caroline Cann discussing some of his offensive philosophies with film. He used the Philadelphia Eagles game-winning Super Bowl touchdown with Zach Ertz as one of his examples.  [insidetheiggles.com]

We'll wrap this thing up with USA Today, which gave grades for each of the new hires. They might as well have given them an F...

The man Sirianni is replacing, Doug Pederson, wasn’t exactly the most popular choice when he was hired — and all he did was win a Super Bowl. But this hire feels like a feeble attempt to fix the Carson Wentz issue by hiring Reich-lite while ensuring that Roseman doesn’t have to listen to anyone else’s opinion. That’s a disaster.  [USAToday.com]

Eight different takes on Sirianni's hiring — four say it's good, three say it's not so good, and one media outlet is undecided. That sounds about right.