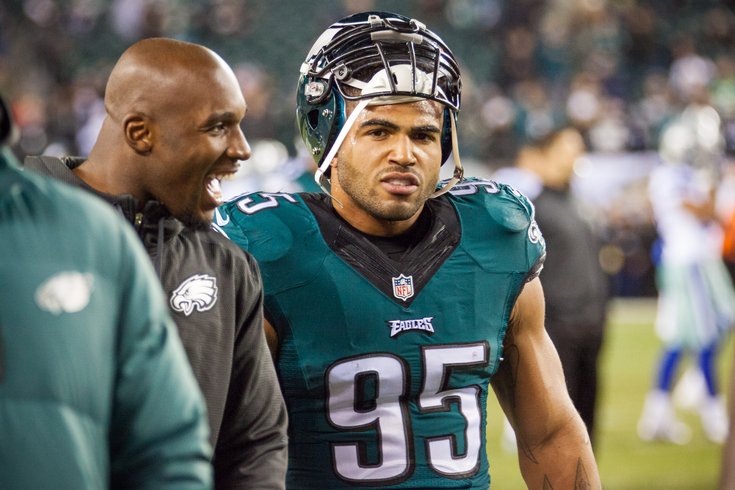 Mychal Kendricks will start for the Eagles in 2015. Will DeMeco Ryans?

Cotinuing on once again with our offseason team needs series, we'll look at inside linebacker, where the Eagles were exposed for a lack of depth in 2014. We identified ILB as the fifth-most glaring need on the team when we began this series. Here's what we said:

"Mychal Kendricks continues to improve and is becoming one of the better starting linebackers in the NFL. And then it gets dicey. DeMeco Ryans, who turns 31 in July, tore his right Achilles tendon against the Texans, four years after he tore his left Achilles tendon. Ryans is as respected as anyone in the Eagles' locker room, but does not have good speed and could be further slowed by this latest serious injury. Beyond that, the Eagles lack quality proven depth."

Here are some guys who make sense in free agency and the draft:

After being a third round pick in 2011 (he's 26), Irving got his first chance to start last year for Denver, but tore his MCL in the Broncos' eighth game. He is a good run stuffer, but not an ideal three-down player. If DeMeco Ryans is not recovered well enough from his Achilles tear to produce on the Eagles' D, Irving makes some sense as a temporary replacement. The Eagles would of course have to check him out medically, and be comfortable with his mental ability to make checks at the line of scrimmage.

This is the brother of Eagles ILB Mychal Kendricks. The Kndricks brothers play the same position, and have nearly identical size. Like Mychal, Eric has impressive athleticism. He can cover, he can blitz, and this season he was a tackling machine, leading the Bruins with 145 tackles, or 58 more than any of his teammates.

Here's Kendricks' game against Virginia earlier this season. He's always around the football, and he made two huge plays in this game -- He forced fumble that was a returned for a TD, and he intercepted a pass that he returned for a TD:

Kendricks could immediately serve as quality depth and possibly more depending on how well DeMeco Ryans returns from his torn Achilles tendon. However, drafting Kendricks would give the Eagles a pair of undersized  linebackers in the middle of their defense, and I wonder how comfortable Chip Kelly and Billy Davis would be with that.

Thompson rushed for 456 yards on 61 carries (7.5 avg) and two TDs for the Huskies this season. Oh, and he played linebacker too.

As a linebacker, Thompson is an athlete in his own class. He would likely project to ILB in the Eagles' 3-4, but is certainly athletic enough to play safety as well. In addition to contributing on offense, Thompson had four TD returns for TDs on three fumble recoveries and an INT. Watch the highlight video below. Playmaker.

Like Eric Kendricks mentioned above, Perryman doesn't have good size, which is doubly concerning for a team like the Eagles who already appear to have a long-term starter in Mychal Kendricks, who is also short. However, Perryman plays big. He a physical tackler who explodes through ball carriers.

Perryman could be a long-term physical presence in the middle of the Eagles' defense if they aren't scared off by his height.

Unlike the undersized inside linebackers mentioned above, McKinney is a big athletic freak of nature who Mississippi State lined up all over the field. There is concern that McKinney may struggle against NFL passing attacks, but as a run defender and pass rusher, he is a very intriguing prospect at ILB in a 3-4 defense.

Eagles Assistant Player Personnel Director Ed Marynowitz was the Director of Player Personnel under Nick Saban at Alabama from 2008-2011, and will have deep intelligence on all Alabama players. Last draft, the Eagles liked Alabama ILB C.J. Mosley, who was taken by the Ravens before the Eagles could land him. With Mosley gone, DePriest piloted the Alabama defense in 2014. He's not the athlete that Mosley was, but is regarded as a very intelligent player and a thumper, almost like former Alabama ILB DeMeco Ryans, who the Eagles may need to replace.