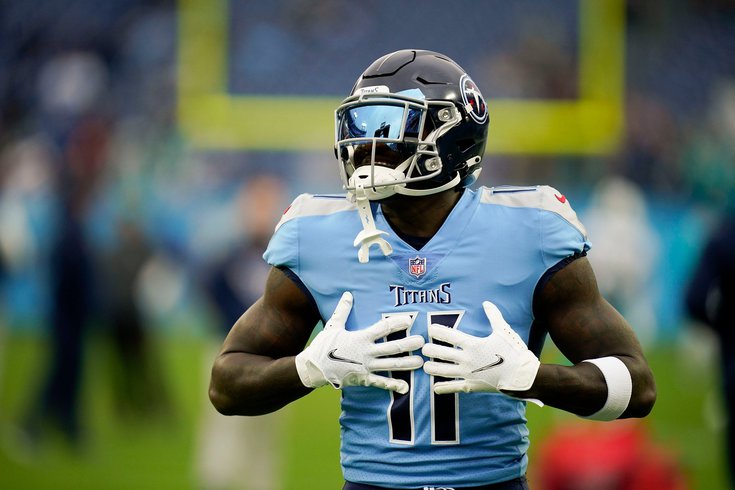 During the offseason, we'll be taking a close look at Philadelphia Eagles players of interest who are currently on the roster, but maybe we don't know a lot about them just yet. Today we'll look at star wide receiver A.J. Brown.

Before we get started, I cut up video of all 114 of Brown's targets in 2021. It's over 26 minutes long. I'll wait while you go watch that. To note, you have to click "Watch on YouTube" below to see the video.

Done? Great! Before we get to our notes on Brown's game, here's a snapshot of his career production:

Despite missing four games, Brown was the Titans' leading receiver by a wide margin. The next closest receiver, Julio Jones, had 496 receiving yards (including the playoffs), or 515 fewer yards than Brown.

The Titans' offense wasn't the same when Brown didn't play. They were 11-3 (including the playoffs) with him, and 1-3 without him. In games Brown played, Tennessee averaged 26.1 points per game, and Ryan Tannehill averaged 230 passing yards. In games Brown didn't play, Tennessee averaged 17.5 points per game and Tannehill averaged 184 passing yards.

Brown's production is particularly noteworthy, given that the Titans had the second-most run-heavy offense in the NFL (behind only the Eagles), and Brown often drew the attention of the opposing team's best corner, like Jalen Ramsey or Xavien Howard, to give a pair of 2021 examples.

I was also surprised by the relative lack of manufactured touches. When you have a player like Brown who is difficult to tackle, a lot of play callers would look to get him the ball on quick screens and use him as an extension of the run game. The Titans did a little bit of that, but not much. There are plenty of other receivers around the league who have their receiving totals artificially inflated by those types of plays, but that can't really be said of Brown.

• Big production in big games: In the three-game stretch in the middle of the season against the Bills, Chiefs, and Colts (all Titans wins), Brown was a stud. He had 25 catches on 29 targets for 379 yards and 2 TD. Late in the season, he completely took over a game in the second half against the 49ers (11-145-1 in another win), and he was the main reason the Titans were even in the game at all in their playoff loss to the Bengals, when he caught 5 passes for 142 yards and a TD, including two plays of over 40 yards, and two additional plays of over 20 yards.

• He's streaky: I don't have a stat to point to here, but when cutting up video of Brown's targets, there would be times when he'd have three catches on one drive, and other times where he might go a quarter or two without a target. Part of that could also just be the nature of the Titans' run-heavy offense.

• Good route runner: Brown is a big target and he does a nice job using his size on slants and in-breaking routes. That's his bread and butter. I was also impressed by his ability to turn corners around on double moves, as well as his ability to sell deeper routes and then provide separation for easy throws on comeback routes.

• Downfield playmaker: While Brown does a lot of his damage in the middle of the field, he also makes his share of plays deeper down the field. He has deceptive speed to run by bigger corners and the bulk to outmuscle smaller corners. He has a career yards per catch average of 16.2.

• Physical against press coverage: The following was my favorite A.J. Brown moment while cutting videos of his targets:

Get off of me!

I love that there was no flag on that play. It's clearly illegal contact by Jimmie Ward of the Niners, but then it's also OPI when Brown chucks Ward to the ground, and the officials were just like, "Eh, I guess I'll just let them both go." But holy crap, Brown's strength is impressive.

• Sideline awareness: Brown made several toe-tap catches near the sideline. He seems to have good awareness of where he is on the field.

• Tackle-breaking was disappointing: Watch any highlight reel of Brown, and you'll see guys bouncing off him like he's Christian Okoye in Tecmo Bowl. But that wasn't the reality of his game in 2021. Pro-Football-Reference.com had him down for just two broken tackles in 2021. They shortchanged him a bit. I have him down for six, which is still a lower number than I would have anticipated. Of course, if you watched the video above, you saw that one of those broken tackles led to a long TD against the Colts.

In watching his targets, there were some occasions where I thought he was going to break a tackle or at least power through a tackler for extra yardage, and he was unable to do so. A good example is at the 8:00 mark in the video above, when Chiefs corner Charvarius Ward was able to keep him out of the end zone on what looked like a sure TD after he caught the ball.

Brown dealt with injuries almost all season in 2021, which I'll assume had something to do with his lack of broken tackles relative to the rest of his career. His injuries in 2021, via draftsharks.com:

• Play style could make him more prone to injury: The chest injury that Brown suffered was a result of a hit by Desmond King. You can find that play around the 16:30 mark in the video above. That play happened to occur near the sideline, but Brown takes a lot of shots after the catch in the middle of the field. He also often tries to dish out punishment to opposing DBs, but will also take some of the brunt of those shots as well.

The physical nature of Brown's game is what makes him such a compelling receiver, but it also comes with added injury risk. If you're the Eagles, you don't want Brown to lose that edge, because without it he's a different player, whereas you're probably telling a guy like DeVonta Smith to get down to the ground or out of bounds when in danger.

• Drops 😬: There were a lot of them in 2021. Pro-Football-Reference.com had him down for eight regular season drops. It's a subjective stat, but a harsher grader might have dinged him for more. I think eight is a favorable number for Brown. There definitely weren't fewer than eight.

When looking at drops, I calculate "drop percentage" by "reasonably catchable passes," or better stated, drops divided by the sum of drops plus catches. I do not use total targets, which I believe are a bad measure of drop percentage, seeing as the receiver often has no chance of catching some of his targets. Got it? No? Yes? Whatever. Using eight as a number of drops (again, probably a kind tally for him), Brown had a drop percentage of 11.3 percent. That's not quite Dorial Green-Beckham territory, but it's in Nelson Agholor's neighborhood.

The added concern is that some of those drops were egregious. In fairness, drops weren't an alarming issue for Brown in the past. Pro-Football-Reference had him down for an acceptable five drops in 2020, and only two in 2019. Again, maybe the injuries were a factor?

• He had two pass attempts: If you watched the video, you saw them. One was a throwaway. Nice job not getting too greedy when something could have gone very wrong with pressure in his face. The other was nearly picked. But file that away for future reference. He obviously has a pretty good arm.

Brown's fit with the Eagles

Brown brings a new element to the Eagles' offense that they were missing from the wide receiver position. He is the big, physical YAC monster who will be complemented nicely by the smooth, separation-creating route runner in DeVonta Smith and the speed guy in Quez Watkins.

While all three receivers have their clear strengths, they can also all be productive at all three levels of the defense. It's a very intriguing trio, and on paper it's the best set of receivers the Eagles have had in quite some time.

But beyond that, I also believe that Brown's specific skill set will help the front office and coaching staff evaluate Jalen Hurts. The following is a video of Benjamin Solak on Lindsay Rhodes' podcast. While I'll respectfully disagree with Ben's notion that the teams with star quarterbacks might be better served to go cheaper at wide receiver, I do think he makes a absolutely fantastic point about Hurts' struggles throwing to the middle of the field, where Brown thrives.

Thanks to @BenjaminSolak for helping me understand why the #NFLDraft is never going to have a bad WR class again & what that’s gonna mean for roster building.

Ohhh alright, I guess I'll transcribe it, too.

"He's 24, and he's a proven NFL star. He also is amazing over the middle of the field, which is where Jalen Hurts has not liked throwing the ball at the NFL level. So let's go get A.J. Brown. We have Hurts right now under contract. If Hurts is gonna be a good enough passer to win a playoff game — because the Bucs, in the wildcard round, just did not respect his arm at all, period. They had no interest in pretending to defend the Eagles' passing game. They didn't care about it.

"So if Hurts is ever going to become that guy, Brown is the sort of receiver he'd need, so let's give him Brown, and now he's got a year to show us that he can throw in the middle of the field and he can develop as a passer. If not, we still have A.J. Brown. He's 25 years old... and we're gonna go get our new guy, a rookie, and we're going to have a star 25 year old receiver to develop him."

That's one of those points where as a writer you're mad you didn't think of it first. But Ben is dead on here. And it's worth noting that Tannehill — a "win with" type of quarterback, as opposed to a "win because of" quarterback — made all kinds of window throws in the middle of the field to Brown in the video above that, as Ben points out, we haven't seen Hurts often attempt.