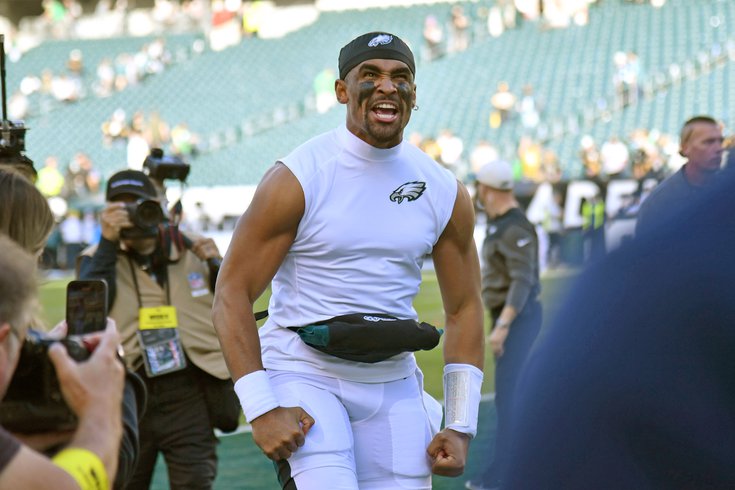 Jalen Hurts is excited that the Eagles moved up a smidge in the overall power ranking roundup average.

Here's where people have the Birds ranked after Week 8. Oh, and here's our version of these sellout rankings, too.

We are eight weeks into the season, and the Eagles have yet to trail in the second half of a game. Philly was in the zone once again on Sunday, attacking an overmatched Pittsburgh secondary through the air in a 35-13 win at the Linc. The receiving star was A.J. Brown, who had three first-half touchdowns and very nearly added a fourth before his monster afternoon was through. Jalen Hurts, meanwhile, continued to build on his increasingly compelling MVP case with a career-high four passing scores while throwing for 10.1 yards per attempt. With an upcoming schedule that includes the Texans, Commanders and Colts, the runway is clear for 10-0. Someone wake up Mercury Morris.

I don't know if the Eagles are going to finish 17-0, but it's hard to imagine them winning fewer than 14 games.

Philadelphia is 7-0 for just the second time in franchise history, matching the 2004 team that advanced to Super Bowl XXXIX. Dreams of home-field advantage throughout the playoffs are warranted: The Eagles have the easiest remaining strength of schedule, according to ESPN's Football Power Index. Playing in the resurgent NFC East, not even a divisional title is close to a lock at this stage, but they couldn't have asked for a better start or to be in a better position for the home stretch.

Fact: After his 156-yard, three-touchdown performance in the win over the Steelers, A.J. Brown is on track to potentially go down as the best wide receiver in Eagles history.

Opinion: The head-to-head between “Thursday Night Football” and Game 5 of the World Series is a little nonsensical following Monday night’s rainout. The NFL has never been one to accommodate others, but the Eagles should propose moving Thursday’s game against the Texans to Friday. The goodwill they would engender within the city would be priceless. They don’t play again after this week until the following Monday night, so there’s no real sweat off their back. It’s an Amazon game, so there’s no broadcast window to worry about. It’s also predictable how much a matchup between an undefeated 13-point favorite and the team with the worst record in the league will outdo baseball’s crown jewel in ratings. OK, maybe Major League Baseball should give us the World Series day game we’ve all been pushing for instead.

#JimmySays: It just absolutely sucks that a Phillies World Series game is scheduled to be head-to-head against an Eagles game. I agree with Bo here that something should be worked out, and the Amazon point isn't one I had considered.

A.J. Brown recorded a hat trick with his three touchdown celebrations in the first half, and the Eagles were able to rest their starters with 9:24 remaining in the fourth quarter. Jalen Hurts is playing like a top-five quarterback, Brown and the rest of this supporting cast is among the best in the NFL, and the defense is second in yards per play allowed (4.66).

#JimmySays: We quibble about Jonathan Gannon and the Eagles defense at times, and sometimes there's merit to the quibbling, but there's no arguing with the results. 4.66 yards per play allowed is ridiculous.

Are they peaking too early? Hard to find many flaws for the league's only unbeaten team, which is winning by an average of 11 points a week. They've turned the ball over all of two times, are stifling teams defensively – and added DE Robert Quinn to that side of the ball – and new WR A.J. Brown is clearly finding his groove after a three-TD explosion Sunday. And then there's QB Jalen Hurts, the first Philadelphia quarterback in the 90-season history of the franchise to win 10 straight starts. Are the Eagles the best team? Very possibly. Are they playing the best football in the league? Almost certainly.

#JimmySays: We'll see if the Birds add a running back today to their firepower as noted above.

Losing big defensive tackle Jordan Davis for a few weeks to a high ankle sprain isn't great, but the Eagles' upcoming schedule (at Texans, vs. Commanders, at Colts, vs. Packers) isn't all that daunting. It's almost unavoidable that the Eagles are the NFC's No. 1 seed, as long as they can stay ahead of the Cowboys in the division.

#JimmySays: The Cowboys are on their bye this week, and then they'll have a pair of road games in Green Bay and Minnesota. It would helpful to the Eagles if they lose one of those games (duh).

They came off their bye with an impressive beatdown of the Steelers. Jalen Hurts has the offense humming as the team readies for a Thursday night game against the Texans.