Five over/unders for the Eagles' preseason opener vs. Steelers 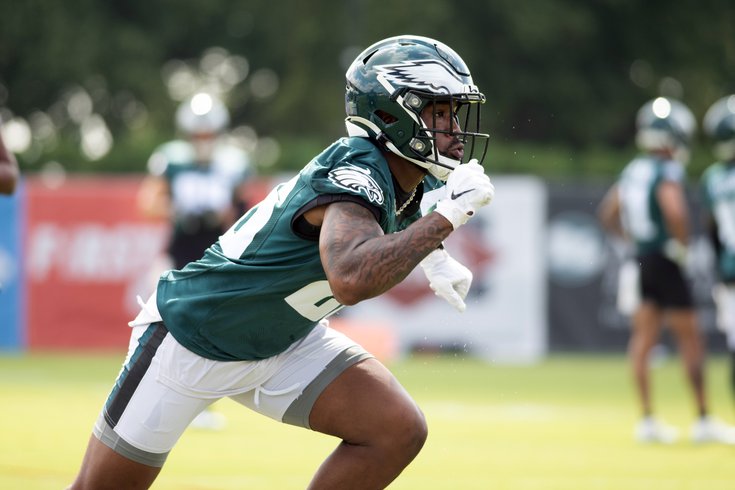 That's right folks, football season is back (sort of) as the Eagles will be back on the field at Lincoln Financial Field for their first game since the conclusion of a disastrous 2020 season that ended with the team firing its coach and trading away its starting quarterback.

But the page has been turned and the Doug Pederson-Carson Wentz Era has transformed into the Nick Sirianni-Jalen Hurts Era — at least for the time being with constant rumors surrounding the Eagles' desire to trade for Deshaun Watson despite the mountain of civil and criminal complaints against him. But all that off-the-field talk can melt away for at least a day, because tonight Philly fans will get their first look at Sirianni's offense, how Hurts fits in that offense (even if we have to wait for DeVonta Smith's debut), and whether or not the strong play from the defense so far this summer has more to do with them or with the fact that they're facing a subpar offense day after day.

The Eagles are hoping it's the latter, but they won't know for sure until they get a chance to see them out on the field. And that comes for the first time tonight against the Steelers, a game in which the Eagles are one-point favorites, according to Pickswise. As we do for every game (including the preseason), let's take a look at five numbers to keep an eye on in the form of our five over/unders...

[A quick reminder for those new to our over/unders: Unless it's explicitly stated, these are my own numbers based on how I think the players/teams will perform on Sunday — and the advice that follows is where I would put my money if I had to. Most are not actual numbers you can bet on, but we'll let you know when they are.]

Over at Pickswise, the over/under for the game ranges anywhere from 34.5 to 36, with the majority favoring the higher number, including Bet Rivers and Unibet, who both set the number at 35.5. And since that's also about the average of the five books they have listed, that's the one we'll go with.

Now the question becomes whether or not they'll hit this number, and I'm really struggling to get a feel for this team. Not only was there not a preseason in 2020 off which to base these predictions, it wouldn't really matter much if there was. This is a new coach, a new quarterback, a new defensive coordinator — not to mention going against a team with a longstanding coach and QB combo — and on top of all that, there are only three preseason games this year, so it's even more difficult than usual to predict how long starters and other 53-man roster locks will play.

Since it's a low number, the safe bet seems to be taking the over, but preseason games are notoriously low scoring, especially early on when the offenses are still looking to get up to speed.

Given that the Eagles defense has been winning more days than it hasn't down at camp this summer — not to mention that they're going against a team that isn't necessarily known for putting up big numbers and could be sitting a large number of their starters — I'm leaning toward the under here.

Last season in four starts (plus a few other appearances), Hurts completed 52 percent of his passes. That's not going to cut it in the modern NFL, no matter how well you can run. And it's especially not going to cut it on a team who has invested considerable draft capital in wide receivers in recent years. Clearly, they know this game is now won and lost through the air first and foremost, and if Hurts can figure out that part of the game, combined with the threat he brings on the ground every time he drops back, he could be as dangerous as QB as there is in the league.

But he's not there yet. He's still got to prove that he has the passing game to be a starting NFL quarterback, and that starts on Thursday night against the Steelers. We still don't know how long Hurts is going to play in this one, which is why I didn't put a number here for passing yards, completions or touchdowns. He might play one series, he might play an entire quarter. We just don't know.

So, do I think Hurts will reach the 60% completion threshold against the Steelers? I actually do. Why? Because I don't see Hurts throwing the ball more than a handful of times, and that small sample size will mean he only needs to complete a few easy passes.

And if Sirianni is smart, he's going to have a few easy passes for Hurts to start the game and get his feet under him. Maybe a quick slant to Greg Ward? A short crossing route to Dallas Goedert? A quick out to Miles Sanders out of the backfield? There will be a lot more of that than there will be of Hurts taking deep shots down the field, especially with DeVonta Smith out. And that likely means a higher completion percentage than we're used to out of Hurts. Of course, the real test will be when he plays a game start to finish, as he failed to hit 60% in each of his four starts down the stretch last season.

But at least for tonight, we think he can hit the number (and honestly I'm going to shoot my shot here and say he finishes exactly at 60%, going 3-for-5 for like 37 yards).

(You know what, now that I think about it some more, I'm a little worried that Hurts has been instructed not to scramble too much and instead to throw the ball away earlier than usual in order to protect his health, which could lead to some incompletions that aren't really on him. Oh well, I'm standing by my prediction.)

Last year, the Eagles were one of the best teams in the league in terms of yards per carry, finishing third in the NFL with 5.0 yards per run. Some of that was aided by Jalen Hurts, who carried the ball 63 times at an average of 5.6 yards per carry. Miles Sanders wasn't far behind at 5.3 YPC, and Boston Scott also contributed a healthy 4.7 yards per carry.

That remains to be seen, but their offensive line should be healthier, they'll get even more touches from Hurts as he'll be the full-time starter, and they have all the main contributors back in the running game, plus a few new additions in Kerryon Johnson and Kenny Gainwell. All the makings are there for this to be a dangerous team on the ground this season.

And that doubly applies to tonight's preseason game, as the Eagles depth at the position likely means that some guys like Jordan Howard and Johnson will be going up against guys pretty far down the Steelers' depth chart. And that could make for a big night on the ground from the Eagles backs. Also, all it takes is one guy to break off one long run and the over hits easily.

Last season, the young defensive end was third on the team with six sacks while playing just 38% of the team's defensive snaps. Only Brandon Graham and Fletcher Cox brought the other team's QB down more than Sweat, who now appears to be locked in a battle for the starting defensive end job with Derek Barnett.

In year's past, I would take the over here, but I wonder how much Sweat actually plays in this one given that the team listed him as a Co-DE1 alongside Barnett in their first unofficial depth chart of camp. They know he's going to be a regular in their defensive end rotation this season whether or not he's named the starter or not — and it's not like rushing the passer takes a lot of timing that needs to be worked out during live preseason action.

If this was a national game, we'd be setting the number much, much higher. But this is a local broadcast, with a broadcast crew that technically works for the Eagles. And because of that, you can bet that they're going to limit the number of references to Wentz (and Pederson for that matter). There could be some mentions in passing, like how Hurts does this or that differently, but overall the belief here is that they'll make one reference to him being traded/injured/whatever earlier in the broadcast when they're recapping the offseason and then they're going to give him the Voldemort treatment during the actual game.