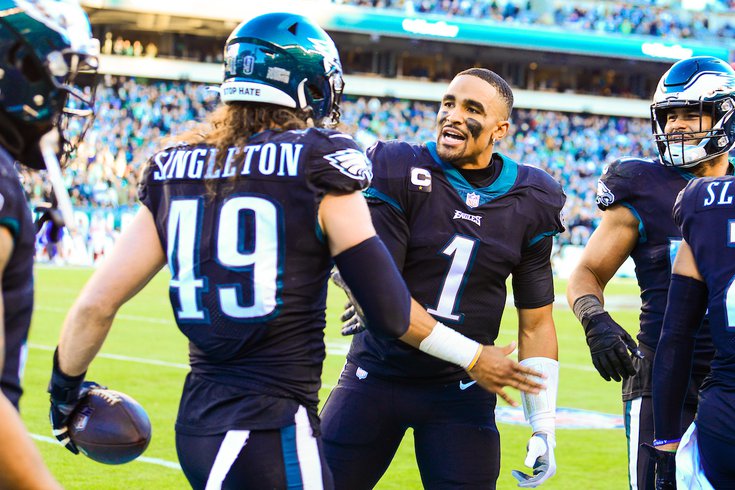 Eagles quarterback Jalen Hurts celebrates with linebacker Alex Singleton during their win over the Giants.

Stats and trends are great talking points — after all, that's kind of my job — but there is really only one number that matters for the Eagles on Sunday: the final score. That's because a win over Washington is the first of three dominoes that needs to fall in Week 17 for the Birds to clinch an NFC wild card spot with one game to spare.

So while it would be nice for the Eagles to continue their rushing dominance (on both sides of the ball) or to see Dallas Goedert or DeVonta Smith go off or the defense get another score, that's all simply noise meant to distract us from the only thing Eagles fans should care about. Beating Washington — and moving one step closer to making the playoffs in Nick Sirianni's first year — would also see the Birds proving a lot of people wrong (myself included) by guaranteeing themselves an above .500 record as well.

Now that we've made it clear that the stats aren't important in this one and a win is all that matters, let's take a look at some numbers to watch anyway in the form of our weekly over/unders, since these are mostly numbers we think will play a role in the final outcome. You can also check out our predictions — and predictions roundup — for Eagles vs. Washington, as well as the latest injury report and some matchups to watch for Sunday's game at FedEx Field.

That's the current total being offered at several sports books listed on Sidelines.io, and it feels about right considering my prediction for the week has this game finishing at 46 points, just slightly on the over side. It also tracks with not only what these teams are averaging in terms of points for and points against, but it's a half point higher than the total from a week and a half ago when they met at the Linc for some Tuesday night football. However, there were quite a few extenuating circumstances in that one, aside from the fact that it was being played on a Tuesday.

Washington was starting Garrett Gilbert, and this time around it will be back to Taylor Heinicke, who himself is a backup but is clearly a better option than a guy you signed off another team's practice squad just a few days before the game. And Washington has actually played pretty well under Heinicke, certainly much better than most thought back when Ryan Fitzpatrick went down for the season. On top of that, Washington will be getting some other players back who were out last time (although they'll likely also be missing Antonio Gibson), not to mention that they'll likely have a bit of a chip on their shoulder after being embarrassed by Dallas last week. Meanwhile, Jalen Hurts' injured ankle should be in better shape, once again making him a true threat to run, something that had been missing since he returned.

Speaking of Hurts' rushing, let's take a look at that since it's clearly a key to the Eagles' success on offense. And with Miles Sanders already ruled out and Jordan Howard still not 100% after suffering a stinger in the team's win over the Giants, Hurts' legs are going to be even more important this week against a Washington team that has been good against the run this season, the Eagles' Week 15 beatdown notwithstanding.

This number is what's being offered over at FanDuel, and it's actually about 10 yards below Hurts' season average. But that's to be expected after the second-year QB combined for just 45 yards on the ground over his last two games, including just seven yards last week against New York. I'm expecting to see a healthier Hurts this week and more of a need for him to run the ball himself. If the Eagles hope to win — and as we said, that's all that really matters on Sunday — hitting the over here would go a long way toward making that a reality.

The Eagles have quietly become a top 10 pass defense in terms of yards per game (215 YPG; 9th). And sure, some of that has to do with the fact that they've been playing some truly horrible quarterbacks over the last two months of the season. But they're also blowing a lot of those teams out — and if we got on the Eagles for padding stats with garbage time points early in the season when they were constantly on the losing end, then we also have to give them equal credit for not allowing other teams to do the same.

When you're blowing opponents out, passing yards against tends to skew high as you drop your secondary back and play a little bit of prevent. And even bad NFL QBs can take advantage of that. But that hasn't really happened against the Eagles, and some of that is due to the fact that the defense has been getting a lot of help from the offense. Long, time-consuming drives fueled by their rushing attack have kept opposing offenses off the field, and that has certainly helped the defense. I mean, it's hard to give up yards and points when you're not on the field.

Washington doesn't have a ton of weapons aside from Terry McLaurin, so the Eagles should be able to key on him with Darius Slay, making life even tougher for Heinicke and Co. and keeping him under the 204.5 yards being offered at FanDuel.

Neither of these two pass catchers are tops in terms of projected yards over at FanDuel — that actually belongs to DeVonta Smith (54.5) — but both of these players were their team's respective leading receivers in the first meeting, and both are sporting a total of 50.5 yards heading into the rematch.

During that first meeting, however, it was no surprise that Goedert out-earned McLaurin 135-51 with Gilbert under center for Washington, Slay locked on McLaurin, and WFT's linebackers being decimated by COVID. Will it happen again? We wouldn't be surprised to see another big day for Goedert, who has shown a real rapport with Hurts since Zach Ertz was traded. Meanwhile, McLaurin is only averaging 3.3 catches for 46.6 yards per game since Washington's bye — numbers that go up slightly if you take out his injury-shortened start against Dallas (54.3 YPG on 3.8 RPG). If we were simply going with the 50.5 number, we'd likely take both to hit the over in this one. But that's not the game here. Instead, we're comparing the two and whether we think Goedert's total will be over or under McLaurin's.

The Eagles defense has at least one takeaway in six of their eight wins this season. The only two in which they didn't record one were back in Week 1 against Atlanta and a week and a half ago when they beat Washington. That was a surprise to many considering Garrett Gilbert was the opposing quarterback — and threw the ball more than 30 times — but it didn't ultimately matter in the outcome of the game.

This time around, facing a tougher quarterback and playing on the road, the Eagles would do well to get at least one takeaway. They seem to have a knack for finding the end zone when they do force turnovers with three defensive touchdowns since Week 8— and obviously that would be even better against Washington — but simply getting a timely turnover could be the difference in this one. Heinicke has had six turnovers in his last four games (5 INT, 1 FL) and if the Eagles can get out to a lead and force him to throw, we think he'll make that five straight games.