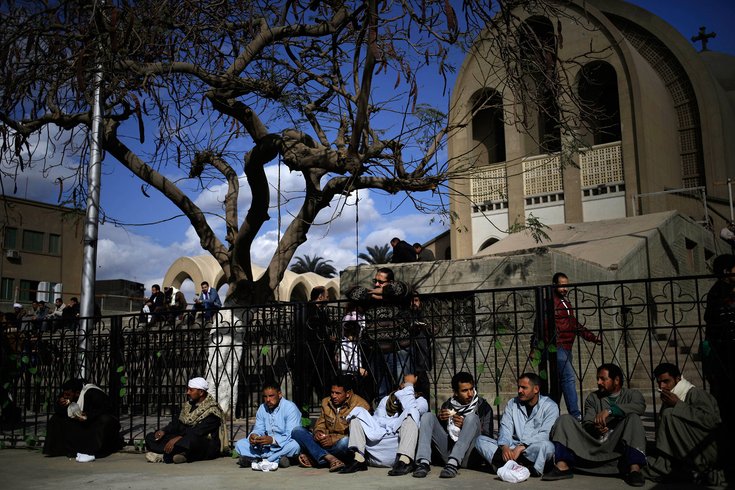 In this Friday, Feb. 13, 2015 photo, Coptic Christian men whose relatives were abducted by Islamic State militants in the central city of Sirte, Libya more than a month ago, protest at the Coptic cathedral in Cairo, Egypt.

Egypt's air force bombed Islamic State targets inside Libya on Monday, a day after the group released a video appearing to show the beheading of 21 Egyptians there.

It was the first time Egypt confirmed launching air strikes against the group in neighboring Libya, suggesting President Abdel Fattah al-Sisi is ready to escalate his battle against militants seeking to topple his government.

The military said the dawn strike, in which Libya's air force also participated, hit Islamic State camps, training sites and weapons storage areas in Libya, where a civil conflict has plunged the country into near anarchy.

"The strike achieved its targets accurately" and the pilots returned to base safely, the Egyptian military said, as state television ran brief footage of a fighter plane taking off in darkness.

The 21 Egyptian Coptic Christians, who had gone to Libya in search of jobs, were marched to a beach, forced to kneel and then beheaded, according to the video, broadcast via a website that supports Islamic State.

In a phone call to Al Arabiya television, Brigadier Saqer al-Joroushi, the commander of the air force loyal to Libya's official government, said Libya had coordinated and joined Egypt in the strikes in the eastern city of Derna.

"More air strikes will be carried out today and tomorrow in coordination with Egypt," Joroushi said.

Egypt, the most populous Arab state, has not taken part directly in the U.S.-led air strikes against Islamic State targets in Iraq and Syria, focusing instead on the increasingly complex insurgency within its own borders.

The United Arab Emirates, a close ally of Sisi, said it "would put all its capabilities" to support ... Egypt's efforts to eradicate terrorism and the violence against its citizens".

Security officials say militants based in Libya have established ties with Sinai Province, a group operating from Egypt's Sinai Peninsula that has pledged allegiance to Islamic State.

Sinai Province has killed hundreds of Egyptian soldiers and police since the army toppled Islamist president Mohamed Mursi in 2013 after mass protests against his rule.

Thousands of Egyptians desperate for work have traveled to Libya since an uprising at home in 2011, despite the government's advice not to go to a state sliding into chaos.

A number of Islamist militant groups have been active since the fall of Muammar Gaddafi in 2011 left Libya without a strong central government. A few have declared ties to the radical Islamic State and claimed high-profile attacks over recent weeks in what appears to be an intensifying campaign.