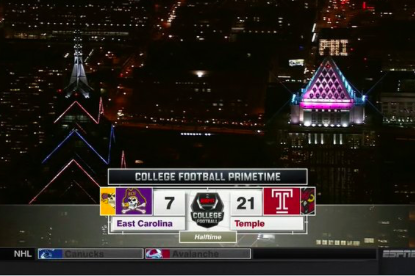 ESPN's skyline footage of Philadelphia is out of date in this still from a broadcast of a Temple football game on Nov. 26, 2016.

It's not easy running graphics for a traveling live sports broadcast that flashes in and out of competitive cities on a weekly basis. There's a lot of information to get across and not a lot of time to do it. Not every feed is going to be live.

But if you're ESPN, the worldwide leader in sports, you might not want to rely on old stock footage of Center City Philadelphia just because none of Philly's pro teams have won a title in over eight years.

That's what happened Saturday night during ESPN's broadcast of Temple's 37-10 victory over East Carolina. The aerial scene, picked up by PhillyMag's Dan McQuade, shows a Philly skyline with an old colorless sign on the PECO building and no Comcast Center.

There's not much to add to this, other than a suggestion that it be fixed. Otherwise, we're entering the digital media equivalent of the classroom cart with the TV-VCR, where you hope you're going to see "Selena" again but it turns out to be a 15-year-old tape about conflict resolution that doesn't align with anything you've seen in those 15 years.

Glad this notorious act by ESPN has finally gone mainstream. I've tweeted at least 2 shots in the past myself. https://t.co/9NRhaRAawD

And here's some evidence this has probably been going on for some time.

@espn You're using old footage of the Philly skyline during tonight's game. The buildings are lit green for tonight's game, not blue #MNF