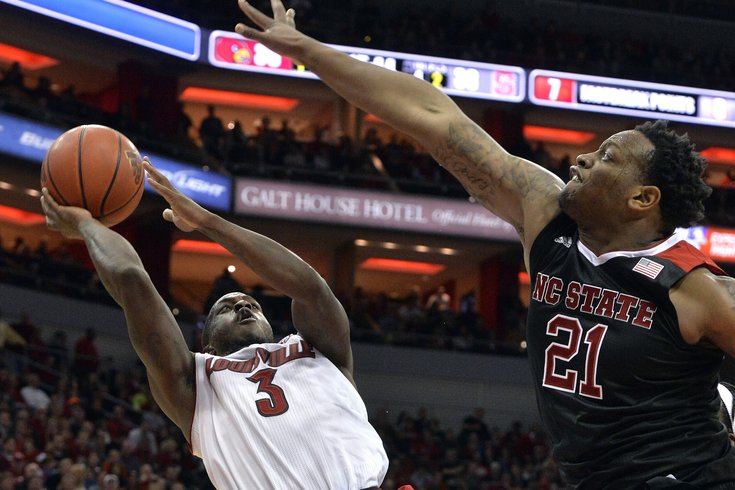 Louisville's Chris Jones, left, attempts an off balance shot over the defense of North Carolina State's BeeJay Anya during the second half of an NCAA college basketball game earlier this month.

LOUISVILLE, Ky. (AP) — Former Louisville guard Chris Jones pleaded not guilty Thursday to charges of rape and sodomy, days after being dismissed from the team.

Jones, 23, appeared in Jefferson District Court before Judge Sheila Collins immediately after turning himself in to authorities. He was released to home incarceration. He did not speak during the brief hearing.

His attorney, Scott Cox, said Jones is cooperating with the police investigation.

"We believe this gentleman is innocent and he's been falsely accused, and he's going to be found not guilty," he said. "We understand there's video potentially in the hallway of the building where this allegedly occurred also video out in the parking lot. We believe those videos will be exculpatory to Mr. Jones."

He declined to comment on where the alleged rape happened.

Jones has withdrawn from classes at the university and has moved out of the athletic dorm and into a hotel room, Cox said.

It's the latest turn over nine tumultuous days for Jones, who was dismissed from the team Sunday. That came three days after he was reinstated following a one-game suspension on Feb. 17 for violating an unspecified team rule. Coach Rick Pitino said Jones returned to the team after meeting unspecified conditions for reinstatement.

Jones then scored 17 points in Saturday's victory over Miami before his dismissal was announced a day later in a one-sentence release saying there would be no comment.

Criminal complaints sworn out by University of Louisville Police Detective John Tarter say the allegations involved two women and that the rape is said to have occurred Feb. 22.

Two others are charged in the alleged attack on the second woman. Jalen D. Tilford is charged with rape and sodomy, and Tyvon Julah Walker is charged with rape. They were arrested and the judge set a bond of $75,000 for Tilford and $100,000 for Walker.

A Louisville campus police report obtained Monday stated that Jones, a Memphis native, sent a woman a text threatening to "smack" her on Feb. 17. No charges were filed against Jones, but he was suspended from the team hours later and did not travel with Louisville to a game at Syracuse.

After that game Pitino said, "I feel awful for the young man. There's certain rules where you can work with people, and other rules where you've got to move on. Unfortunately, we've got to move on. They're like your children. You don't like to see anybody be hurt. But there's also accountability and doing the right things. He didn't. Now, he's got to get his life together, get on with life. There's no way he's coming back. It's over."