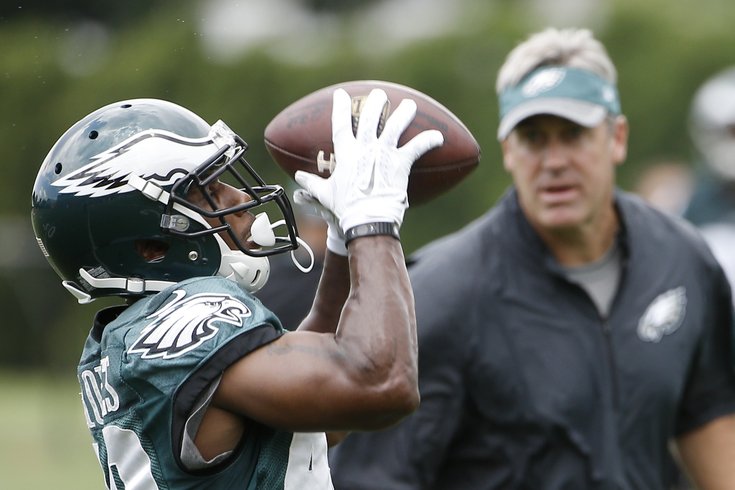 The Eagles won't use Darren Sproles like a 6'0, 220 pound back this season, so they'll have that going for them.

Over the last two years, Philadelphia Eagles RB Darren Sproles was criminally misused in Chip Kelly's offense. It didn't really matter who was in the game -- whether that be DeMarco Murray, Ryan Mathews, or Darren Sproles -- they were all used the same way in Kelly's hurry-up offense.

That's going to change this season under new head coach Doug Pederson, who explained the running backs' struggles a year ago under Kelly back in February.

“You got a downhill guy (Murray). You got a slasher (Mathews). And you got a great quick guy in Sproles who can create mismatches on defense, whether he’s coming out of the backfield or lining up as a receiver. Three different guys, three different styles.”

A season ago, under former Chargers and current Eagles offensive coordinator Frank Reich, Danny Woodhead put up excellent numbers as a receiver out of the backfield. Here is where he ranked in the NFL in some basic receiving categories among running backs:

When asked who might fill a role similar to Woodhead's, Reich pointed to the obvious answer.

"Sproles is the original. He’s the prototype," said Reich. "Right from the start, I remember first coming in when (Doug Pederson) hired me, some of the immediate talk was how we get to use a guy like Darren Sproles."

In San Diego, it didn't end with Woodhead. The trio of Melvin Gordon, Brandon Oliver, and Donald Brown chipped in an additional 54 catches in 2015.

"All the backs have shown a good aptitude to pick things up in the pass game, and be good route runners," Reich added, "so we think we can mix it up, but certainly Darren, he’s the starting point."

In Kansas City under Pederson, a healthy Jamaal Charles caught 70 passes (fifth in the NFL) in 2013, and 40 passes (14th in the NFL) in 2014. In 2015, rookie RB Duke Johnson was fourth in the NFL with 61 catches under then Cleveland Browns offensive coordinator John DeFilippo, who is now the Eagles' quarterbacks coach.

"There’s a lot of ways to utilize that," said Reich. "In Kansas City, in Doug’s offense they’ve done that in the past, and we’ll continue to mix in some other things that we’ve all done, that our staff has done to kind of isolate backs and get good matchups. But when you have a guy like 43 out there, every week in game planning, it’s like, ‘How can we get this guy the football?’ He’s that kind of a player."

In case you haven't noticed, aside from Jordan Matthews, the Eagles' receivers aren't very good. Expect to see a healthy dose of Darren Sproles and the Eagles' tight ends in the passing game this season under coaches who will know how to use them.