Pennsylvania's electoral system is one of the worst in the nation, according to a recent study.

The Electoral Integrity Project ranked the Keystone State in a tie for fifth-worst among U.S. states and the District of Columbia when determining the integrity of the 2016 election results.

The EIP is an independent project made up of research teams from Harvard University and the University of Sydney in Australia. Founded in 2012, the organization examines the legitimacy of elections held worldwide.

The study asked 726 election experts to grade their home state from 0-100 across 49 topics on their perceptions of this year's election. The respondents rated the state's voter registration laws, the local media's coverage of the candidates, the voting process and campaign finance laws.

Pennsylvania received a score of 56, ahead of only Oklahoma, Tennessee, Wisconsin and Arizona. 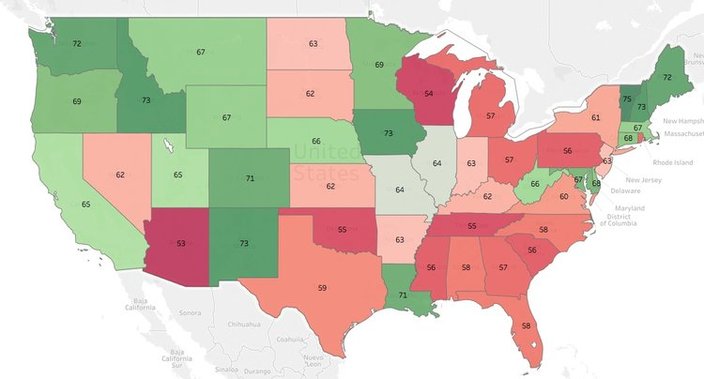 Researchers were critical of a variety of Pennsylvania's voting procedures, but the worst part of the state's system was put in place long before Donald Trump and Hillary Clinton officially declared their candidacies for president.

The Keystone State's district boundaries, which were last redrawn up in 2010, severely impacted the integrity of the election. Experts gave the state a score of 11 out of the 100. Only Ohio, Wisconsin and North Carolina had worse grades. The shapes of the districts were found to favor incumbents and discriminated against certain parties.

The survey determined that Vermont has the best electoral system in the nation.

Despite Trump's unfounded claim that "millions of people" voted illegally, the survey concluded that the results of elections in America are accurate. All 50 states and the District of Columbia received high marks for the vote count, the voting process and the role of electoral authorities.

The EIP urges lawmakers to address larger problems such as the gerrymandered district boundaries and the impact of political contributions.