Eytan Shander: It would be really nice if the Eagles at least pretended to believe in Jalen Hurts 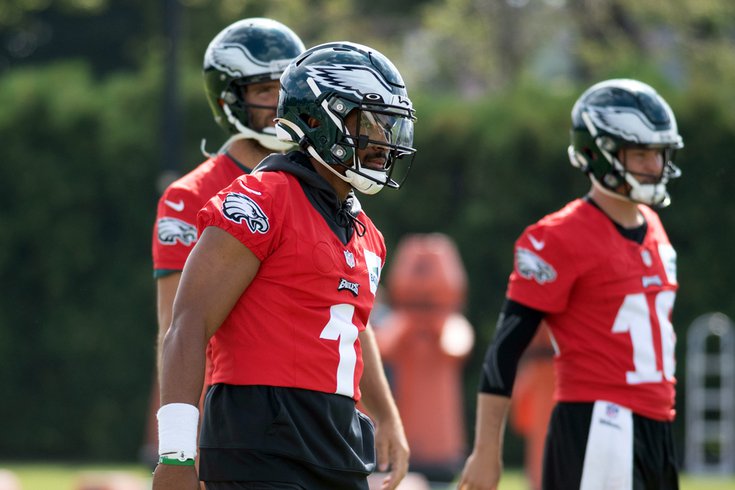 Chaos defines the Philadelphia Eagles, but it’s not always a negative connotation. Look no further than the Super Bowl victory in 2017. The very nature of how they won and who they beat was chaotic to the bone. Unfortunately, the negative aspects of the word also exist in real life, as we’ve seen chaos come in the form of leak after leak… after leak.

Jalen Hurts didn’t ask to be drafted into this organization, especially under these circumstances. Hurts didn’t ask to have a front row seat to one of the biggest — and weirdest — falls from grace in local sports history. All he’s done is handle question after question about someone else, rarely about his own performance. Carson Wentz, Deshaun Watson, Aaron Rodgers to name a few. I’m convinced if the kid struggles out of the gate the team will leak a report about bringing back Nick Foles.

I am super excited about the possibility of Hurts as a leader and quarterback. I just wish the Eagles – at the very least publicly – felt that same way. This was supposed to be a year of "let’s see what the kid can do" and it’s become a year of seeing how many different QB names can be linked to the team.

The team took down the old banner of the old QB but has nothing representing the current starting QB. About that — we still haven’t been given a definitive nod from the coaching staff about their long-term confidence in Hurts, let alone their commitment to him. Howie Roseman refers to the position more than the name of his starter.

The most concerning part of this centers around Watson, but isn’t exclusive to the troubled Texans quarterback. We must balance the hypothetical of if the Eagles make a trade for a new QB with the reality of what they have to offer. It would be naïve to think they wouldn’t be asking about other players based on the draft capital the Eagles can move around the league.

There are some talented dudes out there, including one of the best to ever do it in Rodgers and a current top 5 QB in Watson. But here’s the thing – which essentially kills two birds with the same stone – the Eagles don’t need to let this Watson stuff linger, especially as his civil cases are doing the same.

How hard is it to give Hurts a vote of confidence beyond whatever grunts we get in a presser? I’ll meet Roseman halfway; he can still throw out that garbage of not wanting to comment on other team’s players while also reiterating Hurts is their QB now and moving forward. Don’t get me wrong, this isn’t a “feel bad for Hurts” column, rather a “what the hell, Eagles?” piece.

Watson is under some serious heat because of some serious allegations. The Birds are still talking to reporters – or at least sources inside the building – about trading for Watson. Just end this experiment and publicly say something, at the very least for so many fans – including most of their female base – who understand and accept the severity of the charges.

Roseman could simply lie to us and tell us what we want to hear. It works in our local and federal governments every day. Instead, we have report after report from source upon source about sincere interest if Watson is cleared. Blah. Blah. Blah. It’s rather insulting that they can’t come up with a decently phrased lie about not wanting to pursue a guy with over 20 allegations of sexual misconduct.

I’m left with two conclusions, the easy one being Hurts ain’t here for the long haul, regardless of how well we may think he plays. The second one is a little more difficult to get to, in that the Eagles are okay with what is going on with Watson, to the point where if he clears the bare minimum — like, say, he sits out 4-6 games — then all is fine with bringing him here. That is as frightening as it is insulting.

Grow up, Jeff Lurie, or simply grow a pair and stop hiding behind vague reports from your henchman.

• The Phillies want you to believe in them, but more importantly they want you to believe in their half-ass attempt to be buyers at the deadline. It’s painfully obvious after watching another tight win by the team last night. They're a game and a half back of the Mets and are currently +240 to win the division at FanDuel, according to Pickswise, which are their best odds in a long time. They're right there, and didn't do nearly enough. Also, they fired Gabe Kapler for this guy? C (because of false hope)

• Don’t worry. The Sixers are going to make a move, maybe not as huge as the trade we anticipate for Simmons, but still something that would net them a better player than they had in Danny Green. My goodness, that’s really the baseline here for Daryl Morey. Ceiling is to trade Simmons whereas the bare minimum is to upgrade Green. Trust the process Morey will make at least one of those happen. B (because they can’t sign anyone huge in free agency)

• It should come as little surprise that nobody is watching the Olympics. They have been watered down with corruption and politics for decades, not to mention the coverage being about anything other than the sport itself. No, this isn’t a “stick to sports” message, but rather a “what is that sport?” point. People are either asked to watch a sport they never see or one that just looks different from what they know. Following along some sport you’ve never heard of because the person looks like you or is from your state isn’t a sustainable form of viewing. The NFL can get away with distractions, protests, bans and boycotts – because we know people never follow through. The Olympics can’t survive and is getting hammered in the ratings, as it should. A+