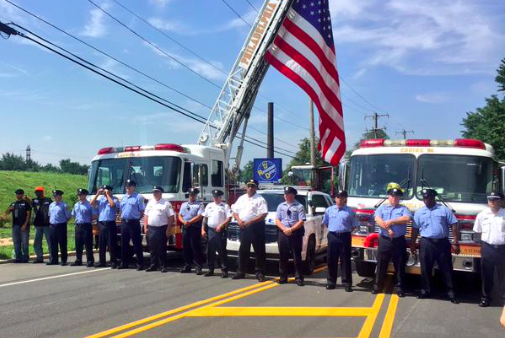 Philadelphia firefighters and police officers who died in the line of duty were honored by city officials on Saturday with the unveiling of a new vehicle and emblem.

The ceremony, held at the 2nd Alarmers Headquarters on Saturday morning, paid tribute to local heroes by outfitting the volunteers of the Philadelphia 2nd Alarmers with a vehicle that will be used on the scene of working fires and other incidents, 6 ABC reports.

Those honored at the ceremony included Officer Robert Wilson III, who was fatally shot during a robbery attempt earlier this year, as well as Officer Moses Walker Junior, firefighter Joyce Craig, and Battalion Chief Michael Goodwin.

Family members of those who died spoke at the event to unveil the truck, which was purchased using donations and includes 20 bottles of oxygen for firefighters to use when in the line of duty.

"We're hoping in the future we get to meet police recruits and fire cadets, and the truck will kind of strike up a story and say, 'Who were these people?' The truck itself will explain who they really were," said Chief George Masi, Philadelphia Second Alarmers.

Philadelphia Mayor Michael Nutter was also present and thanked families while reminding them that their loved ones will never be forgotten, according to CBS 3. The emblem, which honors Robert Wilson III and Moses Walker, Jr., sits on the hood of the truck. The vehicle will be kept at the 2nd Alarmers Headquarters on Roberts Avenue.