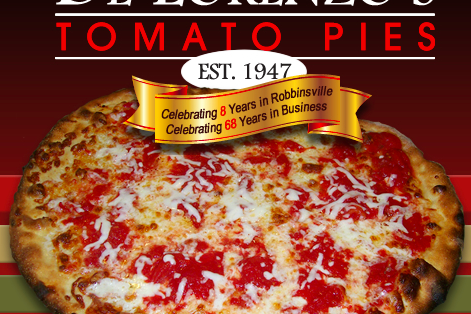 For all the love and appreciation pizza gets in many parts of the world, not nearly as much credit is given to the tomato pie. It takes a special recipe and a solid family name to survive in that competitive space, but that's exactly what the longtime Trenton staple DeLorenzo's Tomato Pies has done since 1947.

After a move from Trenton to Robbinsville in 2012, DeLorenzo's is officially on board to expand across the Delaware River in Bucks County, according to the Courier Times.

The second location, planned for Lower Makefield's Edgewood Village section, will be part of a small mixed-used development called Makefield Glenn, located at Yardley-Langhorne and Edgewood roads. DeLorenzo's will be on the bottom floor of a two-story building with apartments up top. Tenants for a second two-story building have yet to be secured.

Several years back, DeLorenzo's considered opening up shop in Newtown, but when the project was deemed infeasible due to high costs, the restaurant withdrew its application.

Founded by Alexander "Chick" De Lorenzo, the restaurant was a regional and local treasure in Trenton's Chambersburg section for 66 years. When it finally closed its doors to move to Robbinsville, Trenton residents lamented the end of an era.

There isn't yet a firm timeline for the completion of Makefield Glenn, but residents of southeastern Pennsylvania will soon have a great and comparatively healthier pizza place to check out.