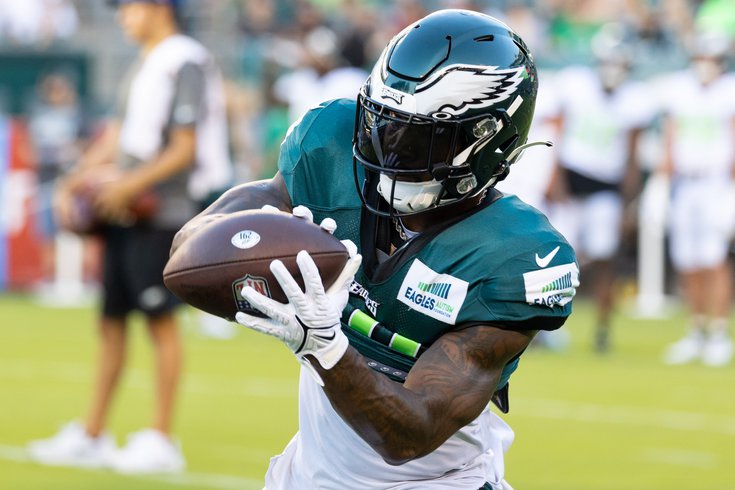 Miles Sanders #26 of the Philadelphia Eagles catches the football during an open practice at Lincoln Financial Field in Philadelphia, Pa. on Aug. 7, 2022.

It's kind of difficult to identify under the radar running backs when it comes to fantasy football. After all, it's the most talked about position and the most difficult to have enough of. The scarcity of reliable every week running backs is what makes them the most valuable asset in fantasy, and because of that, the position is highly scrutinized.

A sleeper pick is really a player that is undervalued, and that the majority of fantasy owners are sleeping on. We've done our best to find five such running backs who we think have a pretty good chance of outplaying their ADP.

We already ranked our top 60 runners. Here's a look at five specific ones who we believe may be steals at their expected value:

There are a lot of red flags when it comes to Dobbins, and that might be your window into getting a deal on him. He missed all of 2021 with a torn ACL and may not be ready for Week 1, though reports are that he is doing well in Baltimore's training camp. In 2020 as a rookie he gained nearly 1,000 yards in the Ravens' run-first offense. The team did not do much besides bringing in Falcons bust Mike Davis and if Dobbins is healthy, the backfield could be his. There is immense upside, as Dobbins is an immensely talented running back due for a second-year boost. If you can nab him in the fourth round or later the value for him to be a top 10 running back is there.

Using Fantasy Pros as a resource, a site we trust, Singletary is somehow receiving a higher ADP than Miles Sanders, but yet he is their RB 34, compared to Sanders at 27. We'll get into Sanders in just a second but Singletary is on this list because many are eyeballing the rookie picked to potentially take his job in James Cook. And while Cook is a potential late-round flier, Singletary came on very strong at the end of last season, combining for 75.6 fantasy points spanning from Week 15-18. He also was a big piece for the Bills in the playoffs. However, he did have just 82.2 points over the first 14 weeks of the season. Which Singletary will we see in 2022? If it's the red-hot running back who concluded the year as Josh Allen's right-hand man, he could be an absolute steal at RB 34.

Are there 26 running backs who will have better stats than Miles Sanders this year? He is the lead running back for one of the most RB-friendly teams in the NFL in the Eagles. Philadelphia boasts one of the best offensive lines in the NFL, led the league in rushing a season ago, and Sanders doesn't really have stiff competition for carries in Kenny Gainwell (who has a ton of drops this summer) and Boston Scott (who might find himself cut). Sanders had zero touchdowns last year, an anomaly that is unlikely to repeat. That fact definitely hurt his projected numbers, and if he is able to stay healthy (a big if, he has a hamstring injury at the moment) and can find the end zone at all, he'll play better than his ADP.

Pierce was ranked by Pro Football Focus as the best performing college running back last year, and he finds himself in a backfield in Houston blocked only by Marlon Mack and Rex Burkhead. It seems extremely probable that he is able to outplay that aging duo and take the lion's share of carries at some point over the first few games this season, if not in the first one. He should be drafted in every league and his current standing at RB 38 is an extremely cheap ranking. There is nothing wrong with stretching for him in the 7th or 8th round or so.

There are a bunch more rookie running backs worth a write-up here, like the Falcons' Tyler Allgerier, or the Seahawks' Kenneth Walker II, but Robinson is a sleeper not because he is highly touted — but instead because of his situation. Working his way into the backup role in Washington with J.D. McKissic no longer in town, reports from Commanders camp have current starter Antonio Gibson struggling. In the first preseason game the RB1 was pulled after fumbling and when he returned with the 2's, he didn't even get the team's third-down carries. Robinson could be a fantastic late-round pick up who falls backward into a starting role. He's worth a pick in the teens.